Posted in: No Huddle by Brent Lorentson on January 2nd, 2014 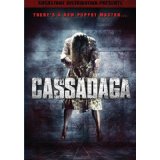 The first film I saw of Anthony DiBlasi was the adaption of the Clive Barker short story, Dread.  It was a small film that hasn’t seemed to have found its audience, but I enjoyed it and thought that DiBlasi showed some promising signs of becoming a name in horror to look out for.  In his new release Cassadaga he continues to show his signs of promise, though I feel he’s still got a way to go before he releases the film that is truly going to wow us and have him become a major player in horror cinema.

With the latest horror entry from DiBlasi we meet Lily (Kelen Coleman), who early on suffers the loss of her younger sister in a tragic accident.  Lilly ends up relocating to a small town, Cassadaga, for an art fellowship program, but like all quaint small towns in horror films, nothing is ever as innocent as it may seem.

A lot of time is spent introducing characters in the front portion of the film, so much so that you kind of begin to forget it’s a horror film that you are watching.  I don’t have much of a problem with this, but a lot of these scenes do feel a bit unnecessary and perhaps could have used more  of an ominous feel rather than developing a romantic relationship with a character who really never helps drive the plot.  What Mike (Kevin Alejandro), the doting single father, does do is take her out to meet some friends where over drinks the group decides to visit a psychic to communicate to ghosts.  Of course Lily would like to take this opportunity to possibly talk to her deceased sister, but the consequences of trying to commune with the dead lead to another spirit latching onto her in hopes that Lily can help bring the spirit’s killer to justice.

It sounds a bit hokey, but the séance scene actually works better than most big-budget affairs, and what piqued my interest all the more is the killer who Lily believes she now must bring to justice.  This is a horror film, so just a guy strangling women won’t do in a shock-value genre.  Instead we get Geppetto, a serial killer who dismembers his victims and pieces them together as marionettes.

What works in favor of Cassadaga is that the story isn’t so much a by-the-numbers serial killer cat-and-mouse game; instead we have separate storylines that simply just intersect.  In the same breath, I have a problem with the fact the deaf girl manages to piece everything together so easily when the police and everyone else seem to be mystified and scratching their heads.  The same goes for the final confrontation between the killer and Lily; this became a little frustrating when characters couldn’t stop making bad decisions.  I still want to smack one of the characters for lying down in the back of a squad car to “take a nap”; it’s scream-at-the-television obvious how bad an idea this is.

Despite some hiccups throughout the film, Cassadaga still delivers a highly enjoyable film that impresses more than your standard direct-to-video fare.  For those wanting to shake off the holiday cheer with something a little dark and creepy, Cassadaga is worth a look.

Brent Lorentson is a horror writer and film critic based out of Tampa, Florida. With a BA in Digital Film, he co-wrote and co-directed Scavenger Hunt. His short stories have appeared in various horror anthologies. In 2019 his short script Fertile Blood will be a part of the anthology horror film Slumber Party. He is currently working on his first novel A Dark and Secret Place set to be released in late 2019. Favorite Films: Taxi Driver, Fight Club, I Saw the Devil, The Wild Bunch, Dawn of the Dead, A Clockwork Orange, Pulp Fiction, Heathers, The Monster Squad, and High Fidelity.
12 Days Of Christmas Giveaways – Day 9: Ancient Aliens: Season Three After Christmas Gift Guide Spotlight: Diagnosis Murder: Complete Collection