Posted in: The Reel World by Jeremy Butler on January 10th, 2014 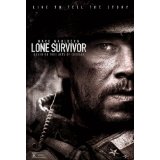 “There is a storm inside of us. I’ve heard many team guys speak of this. A burning. A river. A drive. An unrelenting desire to push yourself harder and further than anyone could think possible.”

To understand the significance of this movie, I feel that it is important to give a little background about the true events that this movie covers. Now there is no doubt in mind that every American has heard something or other about 19 brave souls lost and the one survivor. (Of course I am ashamed to admit that the first time I heard anything about this was with the announcement of Lt. Murphy being award the Medal of Honor, sometime after the event of things). During 2005, the United States Navy took part in covert mission codenamed Operation Red Wings. Red Wings was a mission to travel behind enemy lines into Kunar Province and eliminate a Taliban leader, Ahmad Shah. A four-man team was chosen to carry out this mission: Lt. Michael Murphy, SO2 Marcus Luttrell, SO2 Curtis Axelson, and SO2 Danny Dietz. Of the original four men sent to carry out this mission, Luttrell was the only one to return; this is the story of what happened.

Peter Berg helmed this project as well as made a brief cameo; Mark Wahlberg, Taylor Kitsch, Ben Foster, and Emile Hirsch make up the four-man team; as far as production teams go this was an ideal team in my opinion. Berg in recent years has shown his proficiency to handle this caliber of film, not to mention that each member of the cast has past experience portraying a member of the armed forces with the exception of Hirsch who is an excellent actor regardless. However, enough about prerequisites, more about the film.

The first images shown are archival footage of Seal training which gives the best idea of what all goes into becoming a United States Navy Seal. The footage paints a clear picture, and let’s just say with the amount of training it takes, those who make it through have earned to right to be known as warriors. Immediately afterwards we are introduced to the team the day of the mission, Lt. Michael Murphy (Taylor Kitsch), SO2 Marcus Luttrell (Mark Wahlberg), SO2 Curtis Axelson (Ben Foster), and SO2 Danny Dietz (Emile Hirsch). We get to see the camaraderie among this core four, watching them engage in competition and talking about their lives and people waiting for them back home. We get to know them as men.

Then word comes down: “Operation Red Wings is a go.” The team prepares and that night leaves on their covert mission to locate, capture, or eliminate Taliban leader Ahmad Shah. Everything is going according to plan, the team has made it into position, and they have located the target. Things take a turn when a group of villagers happens across and discover their position. Though the team manages to neutralize the threat, they now face a dilemma: if they let the villagers go, they are sure to alert the Taliban forces to them, and they will not escape with their lives. The only other option before them is to eliminate an innocent man and his two sons for the sake of their mission.

Deciding that the latter is too horrific, the team takes their chances releases the hostages and escaping as quickly and as quietly as humanly possible. Before they could escape, they found themselves surrounded by a much greater force and did the only thing they could do: they fought.

Absolutely a story worth telling, Lone Survivor is an intense action-packed experience that even though you know exactly how things are going to end, you can’t help but hope that they turn out differently. The firefight pulls no punches, and neither does Berg or the actors as they get right into the thick of things and into heart of the action. The action sequence is the film’s pièce de résistance, and it delivers. However, though the action is the part that will most notably stay with me, that wasn’t all that the film brought to the table; there was the unity.

Quite possibly the main component of Lone Survivor was the unity between these four men, brought to screen by these four exceptional actors and the director; the best example of this came from Ben Foster during the firefight where he talked about dying doing what he loved. Only those who actually knew these four brave men can say whether or not the actors did the men justice, but if I’m allowed to put in my two cents, I’d say that they did.

When comes to stories based on true events, I usually approach these films with a healthy degree of reservation, because it is so easy for the true details to become distorted to fulfill the Hollywood necessity to keep the action rolling to keep the audience interested, which is why I have respect for a film like Zero Dark Thirty because it was less about the action than the road travelled to one of the most successful missions in American history. However, just as important as it  is to highlight our success, it is doubly important to remember the times when we weren’t, and that is the key significance for Lone Survivor in my opinion.

Jeremy Butler is a film school graduate of the International Academy of Design and Technology. He is been writing for Upcomingdiscs since 2012; however, movies have played a big part of his life for much longer. Favorite genres include horror, science fiction/fantasy, and comedy. Favorite movies are V for Vendetta, Boondocks Saints, Kiss Kiss Bang Bang, and The Godfather.
Murph: The Protector (Blu-ray) We Are What We Are