Posted in: No Huddle by Brent Lorentson on January 14th, 2014 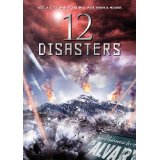 Let’s face it, there are a lot of disaster films out there, and not very many of them are good.  This is one of those Hollywood ideas I can’t quite understand why they continue to go to this well, because for those most part for it to be any good you need to throw a lot of money into the film and nearly 9 times out of 10 what results is a laughable mess.  The 90’s were full of disaster films, whether they were natural disasters or disasters caused by aliens of another world.  Independence Day, Twister, Volcano, Dante’s Peak, Armageddon, Deep Impact…these were the movies that were the tent pole fodder for maximum popcorn consumption, but none of these are films that you sit back and feel you saw something that held any substance.  It’s a genre that has accepted its place as nothing more than a genre of guilty pleasure overindulgence, where convoluted plots and cardboard characters are to be accepted.  Personally Hard Rain, the heist film set during a flood, is my favorite guilty pleasure disaster film.

But what happened to the disaster films with teeth, the films with intense action and drama filled with characters we all gave a damn about?  The Poseidon Adventure, The Towering Inferno, these were and still are the films that hold up, and they didn’t have the technology that we do now.  What made these films great were the performances that were spread throughout.  Now, instead of a film filled with intelligent, interesting characters thrust into situations where their lives are in peril, we get 12 Disasters.

12 Disasters is yet another film that takes on the Mayan prophecies, but instead of simply being a disaster film, it attempts to be a holiday film as well.  The film goes about deciphering the Mayan calendar and their fears of the end of days just like every other Mayan film, only this time the Mayans are the ones who created the song The 12 days of Christmas as a way of warning us in the future about what to look out for.  But look at the bright side, folks, we’re not doomed, because a savior is among us, and she bears a birthmark that reveals her true identity. This savior of ours is none other than Jacey (Magda Apanowicz), and it is on her 18th birthday that Judgment Day has fallen upon us.

The town of Calvery is the site of the beginning of the end.  Ice falls from the sky in giant slivers that impale those unfortunate to be in their path of destruction.  There is Grant (Donnelly Rhodes), who seems to know how to prevent the end of days, only he needs Jacey to help him collect five rings that are hidden, and once all the rings are found apparently this will be the key to stopping the apocalypse.  But things are never so simple as collecting a couple of rings; nature throws tornadoes, flash freezes, earthquakes and various other disasters in Jacey’s path to prevent her from succeeding.  Her biggest adversary is Kane, who is a developer who seems to believe Jacey can help save the world, only he believes salvation will only come in sacrificing Jacey.  At least Jacey has her parent Joseph and Mary to help her out.  Oh, did I mention just about every character has some sort of connection to the bible? There is even a Jude character who of course betrays Jacey.

How the Mayans are connected to this town in America is beyond me; the explanation about Jacey being of Mayan descent from over a thousand years ago doesn’t seem right either.

To call the film predictable is a bit kind; this is simply a film where I just watched in disbelief that someone decided to not just green-light this but throw money at it.  As a fun drinking game, gather some friends and take a shot every time a character encounters some form of element and the body suddenly burst into shards or bits for really no explainable reason.  The actors attempt to work with this script, but even as they talk about chasing down rings so this girl can prevent the end of the world, without good reason to explain this theory, even the actors seem to be rolling their eyes and waiting to cash their checks on this one.

There are plenty of disaster films out there; this personally goes down as one of the worst ones I’ve seen yet.  Sharknado, as ridiculous as it was, at least was cheesy fun and seemed very self-aware of the film that it was.  12 Disasters is a film that attempts to cash in on the holiday spirit and tries to throw a disaster film around this cash grab.  The result is a film that seems to just insult its audience and does little to nothing to engage us with anything resembling a plot or characters worth caring about.  This film just made Twister look like the Citizen Kane of disaster films by comparison.

Brent Lorentson is a horror writer and film critic based out of Tampa, Florida. With a BA in Digital Film, he co-wrote and co-directed Scavenger Hunt. His short stories have appeared in various horror anthologies. In 2019 his short script Fertile Blood will be a part of the anthology horror film Slumber Party. He is currently working on his first novel A Dark and Secret Place set to be released in late 2019. Favorite Films: Taxi Driver, Fight Club, I Saw the Devil, The Wild Bunch, Dawn of the Dead, A Clockwork Orange, Pulp Fiction, Heathers, The Monster Squad, and High Fidelity.
Being Human: Complete Third Season (Blu-ray) Star Trek: Enterprise – Complete Third Season (Blu-ray)