Posted in: No Huddle by Archive Authors on January 21st, 2014 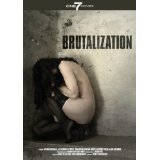 The first thing I should discuss is the title. Brutalization is not the original title of this 1973 forgotten film. The DVD cover puts it very succinctly. “From the most forgotten vaults of European exploitation rises once again this effective and very violent Dutch thriller that boasts a young Sylvia Kristel that later on achieved world fame thanks to her role in the Emmanuelle series.” The intention of the re-release is to capitalize on the late Kristel’s fame. The title Brutalization is probably more marketable and to the point than the original title, Because of the Cats. The cover does make clear that she is not the star of this movie but a very young supporting player. Her part is still substantial, and she is used very effectively.

The real question for me, is this more than a simple exploitation film? The film has echoes of the Manson family and Clockwork Orange with the clear thematic ties of amoral youth causing mayhem and murder. The film is based on a series of popular detective books by Nicholas Freeling with the lead central character, hard-boiled and unconventional Inspector van der Valk. The director, Fons Rademaker, was nominated for a Best Foreign Film Oscar for his first film, Village by the River in 1958 and later won for The Assault in 1986. I mention this again to dispel the notion that this a cheap exploitation film.

Even though this is a Dutch film, it has a wide range of European actors all speaking English. One of the most familiar is Alexandra Stewart, who plays a beautiful prostitute who spends time with the married inspector while he is away from home. Stewart has had a very long career from the 1950’s to today that includes films like Exodus, Day for Night, Under the Cherry Moon, Frantic, The Fire Within (by the father of her child, Louis Malle) and Emmanuel 3. Inspector van der Valk (Bryan Marshall) is brought in to investigate the brutal rape of a 40-year-old woman by six masked boys in front of her husband. The boys’ goal is clearly malevolent destruction and violence for violence sake. The rape is depicted unflinchingly in all its horror. The inspector follows a hunch that these are rich, bored youth from a rich nearby seaside town. He investigates and rather quickly starts to piece together the suspects who arrogantly stonewall him along with their extremely well off parents.

I mentioned the Manson family earlier as well as A Clockwork Orange. In the early 70’s, both were high profile examples of youth gone violently insane. There is a strong connection here, and the boys have a counterpart in their teenage girlfriends and a svengali-like mastermind. The goal seems to be amorality and violence as an exercise of power by the gang.

Sylvia Kristel is one of the girls and has one of the most compelling scenes as the girl who seems most conflicted by her startling behavior. There is much nudity and sexuality in the film, and Kristel is especially notable for her scene in the ocean with her boyfriend and all her naked girlfriends. The inspector has landed in a hotbed of depravity even worse than he expected. It does not faze him much, since like most hard-boiled detectives, he has seen it all.

It is gratifying to see Sylvia Kristel before her fame displaying a fresh, raw talent that was, to use a word, exploited over the years. She made many films that were titillating exploitation from seven Emmanuelle films, Private Lessons, Private School, Lady Chatterley’s Lover and others all meant to focus on her sexually provocative image. Heavy use of cocaine and unfiltered cigarettes led to her early demise in 2012. In this film, Kristel seems poised and talented.

Overall, the film is honest and uncompromising for a film from the early 70’s. The original title, Because of the Cats, has to do with the girl gang, and it should be mentioned that some cats are killed in this film. Brutalization is probably the better title, because it is honest. The film is about rank brutalization by callous and unfeeling youth who despised the society they came from.