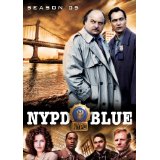 Steven Bochco is no stranger to innovative television. Hill Street Blues is arguably the best cop show ever made. Even his failures are praised for their innovativeness and freshness. Remember Cop Rock? NYPD Blue didn’t just push the prime time envelope. It tore the envelope to pieces and blew it away with hurricane-force winds. George Carlin made a career out of his “Seven words you can’t say on television”. Along comes NYPD Blue and Carlin just might have needed a new act. Language and nudity made this the first R-rated prime-time program. The pilot arrived with a flutter of controversy. Morality groups were vocal, and sponsors were scarce. Twenty percent of ABC’s affiliates refused to show the pilot at all. When you watch these DVDs, it’s hard to understand what all the noise was about. Today this stuff is the tame and more like the norm, and once again Bochco changed TV forever.

When the fourth season of NYPD Blue arrived on DVD it was June of 2006. There had already been over a year since the previous season was released. Suddenly the releases stopped, and fans were left scratching their heads to figure out why. I would field question after question from fans asking what had happened. Answers were as scarce as the DVDs themselves. It wasn’t just NYPD Blue. It appears that all of Steven Bochco’s shows have been held up in home video limbo. Hill Street Blues stopped after two seasons, and LA Law never saw the light of day at all. You can likely forget about Cop Rock or Bay City Blues.

Finally Shout Factory has come to the rescue for Bochco fans. The full series of Hill Street Blues will be released this spring, and the first season of LA Law is soon on its way. For fans of NYPD Blue, the wait is over now. Shout has just released NYPD Blue Season 5 on DVD. This five-disc set includes all of the episodes but no special features. At this point, let’s be thankful we’ve got the episodes.

NYPD Blue follows the exploits of the detectives of New York’s 15th Precinct. You have Andy Sipowics, played by Hill Street alumni Dennis Franz, and his partner Bobby Simone, played by Jimmy Smits. Also in the squad this season is Diane Russell, played by Kim Delany. She is also Simone’s lover and gets to be his wife by the end of this season. There’s James Martinez, played by Nicholas Turturro, who is newly promoted from patrol cop to detective this season. He’s partnered with Greg Medavoy, played by Gordon Clapp. Medavoy is a bit of an odd man out here. He’s played as a Cliff Clavin kind of character who knows too many little facts but doesn’t often come off as the sharpest tool in the belt. The others don’t appear to have tremendous respect for him and he, at times, looks more like he should be on Barney Miller rather than NYPD Blue. He gets a chance to shine in the second-to-last episode where he does something clever and the rest of the cast makes a big deal out of it. Whatever his function, he would remain one of the show’s most consistent characters, staying with the series its entire 12-year run. The only other actor on the show to do that was Dennis Franz. The squad is lead by Lt. Fancy, played by James McDaniel.

The series was known more for its style than its content. The music was percussive and kept you a little on edge. The camera work was shaky and manic. There was a documentary feel to the style that did manage to bring you closer to the material. It never looked quite as staged. I got the impression actors were not quite so strict with stage elements like markers. The series never seemed to slow down. The storytelling was kinetic and full of energy.

Of course, Dennis Franz was the true star of the series. David Caruso was intended as the star, but he left after one year, believing his career was tailored more for feature film stardom. That didn’t really work out for David, but it did for NYPD Blue. While Andy would have a few partners in the show’s 12-year run, his partnership here with Bobby was the best years of the series. They had wonderful chemistry and complimented each other’s styles. Andy was the tough guy who Franz also portrayed on Hill Street as Norman Buntz. While Andy did have a softer side, there’s no doubt both Franz and Bochco were depending on the brute force charisma of Buntz to carry over to this series. On the other hand, Bobby provided the team’s heart. Sure, he could bust heads, too, but Bobby had a softer side that also worked as a calming agent for Andy. Jimmy Smits would try, but he’d never develop this kind of character for television again.

This show shone best in the interrogation rooms. It’s where you’ll spend most of your time. The detectives will do anything to get their confession, and that means more than a few beatings. Of course, it’s not a model for civil rights, and we all deplore that sort of thing. But it sure is fun to watch, ain’t it?

The fifth season would offer some interesting developments. The season begins just where the fourth finished. Bobby was getting jammed up working for the feds, and the season’s first episodes were spent cleaning up that mess. It makes it even more unfortunate that it took eight years to get this season out. That’s a long time to hold over a cliffhanger. You might want to rewatch the last few episodes of season four to get back into the flow of the show.

The James Martinez character would suffer a back injury so that actor Turturro could star as Sammy “The Bull” for the Gotti film Witness For The Mob. Sharon Lawrence, who played Andy’s wife and assistant district attorney on the show, had left to star in her own sit-com Fired-Up. Fortunately for Blue fans, that show quickly went belly-up, and the Sylvia character returned to the fold toward the end of this season.

This season features one of the show’s best episodes. Lost Israel finds the detectives on the case of a murdered young boy. The parents have put the finger on a local homeless man named Israel who can’t speak. The detectives believe it was the father and have to prove it. Thom Gossom Jr. delivers an award-winning portrayal of the sympathetic Israel, who communicates by pointing to bible verses. It’s also one of the more nuanced performances by Franz, who gets to show more than his tough-guy act here.

The season is mostly stand-alone with a short arc about a dirty cop who killed a girl later in the season. It’s really the only story that carries over. That means it’s easy to watch the episodes in short bursts. A big shout out (pun intended) goes to Shout Factory for finally getting us back into the 15th precinct. “Here’s a once in a lifetime event.”

Gino Sassani is a member of the Southeastern Film Critic's Association (SEFCA). He is a film and television critic based in Tampa, Florida. He's also the Senior Editor here at Upcomingdiscs. Gino started reviewing films in the early 1990's as a segment of his local television show Focus. He's an award-winning recording artist for Omega Records. Gino is currently working on his 8th album Merchants & Mercenaries. Gino took over Upcomingdiscs Dec 1, 2008. He works out of a home theater he calls The Reel World. Favorite films: The Godfather, The Godfather Part II, The Body Snatcher (Val Lewton film with Karloff and Lugosi, not the pod people film), Unforgiven, Gladiator, The Lion King, Jaws, Son Of Frankenstein, The Good, The Bad And The Ugly, and Monsters, Inc.
Brutalization Crossing Lines: Season One (Blu-ray)