Posted in: No Huddle by Archive Authors on February 4th, 2014 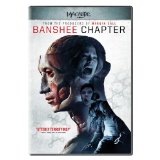 We can never hope to know all the secrets the government keeps, which includes experiments conducted by the Central Intelligence Agency or even more secretive and possibly unknown agencies. It would be impossible to investigate all the theories and conspiracies, because that could fill a library full of meandering speculation and endless conjecture. Even more speculative is a large number of drugs that have been deemed illegal and suppressed from rigorous and open medical examination. One of these drugs is DMT, which is the most widely available hallucinogen in nature and exists in the human body naturally and probably is produced by the pineal gland in the brain. It is becoming increasingly popular through religious Brazilian ceremonial Auyusca tea, which has been upheld under the Freedom of Religion Act and the Supreme Court.

Banshee Chapter is a straight-out horror film that uses an original approach of investigating some of these ideas. The film is what is considered a micro-budget film, yet took the novel approach of filming in 3-D. They knew they were probably breaking rules, because 3-D is hard enough with a big budget, let alone a film that uses mostly natural light sources and handheld cinematography. It mostly works pretty well. It uses a lot of classic conventional scares to make up for its lack of big-budget effects.

Not many films have dealt with tampering with the brain and specifically stimulating the pineal gland. Two that can be mentioned would be Altered States and From Beyond. Both suggest that the brain can be pushed to unknown limits and into other realms and dimensions. In this film, the DMT is like no other, since it is illegally extracted from human brains. DMT experimentation is becoming popular, spearheaded by the late Terrance McKenna, but these trips are like nothing he has described. These trips are dangerous and scary beyond anyone’s worst expectation or imagination. It should be said that it is probably totally fanciful and done for the purposes of a good story.

It starts with James (Michael McMillian, who is Steve Newlin of Tru Blood fame) taking a trip recorded by his friend. Both of them disappear after being tormented by creatures. James’s friend, Anne Roland (Katia Winter) is a journalist who is driven to investigate her former lover’s disappearance. It leads her to the Nevada desert to search out a famous renegade writer who might have been the source of the illegal substance. Thomas Blackburn (Ted Levine of The Silence of the Lambs) is a fictional writer who shares some qualities with real-life writer Hunter Thompson, including a reckless lifestyle and an interest in various illegal practices. Anne hunts down the reclusive writer, and they play a cat-and-mouse game over what might be actually going on. At one point Blackburn mentions a H.P. Lovecraft story about a scientist who invents a machine that stimulates the pineal gland. They eventually join forces in a manner of speaking to find out what exactly were the effects of the drugs that were part of secret government experiments in the desert. The film makes some claims that such experiments might have taken place by including some archival footage including footage of Congressional hearing with CIA director Stansfield Turner from September 21, 1977. It alludes to experiments that took place beginning in 1963 called MK-Ultra. Again, it would be impossible to get very much real information since much of it has disappeared. It also includes footage of President Clinton talking about these various experiments. It also includes investigations into former NSA operatives and their experiments with shortwave transmissions. It should be noted that the company releasing the film, Xlrator, deals in other types of fringe cinema that look into cults and conspiracy theories of all types.

It is ultimately a simple entertainment that is reasonably effective. The performances are good, with Ted Levine especially relishing his juicy part. It is a relief, if nothing else, to see a horror film that is not about zombies or vampires.