Posted in: No Huddle by Jeremy Butler on February 5th, 2014 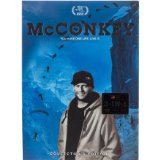 It can never be said that there is not a certain allure to living dangerously; whether it be skydiving (something I will be becoming very familiar with in the near future), bungee jumping, skiing, snowboarding, or deep sea scuba diving, it is well known and accepted that each one of these activities carries an inherent risk to them, but as I said, there is a certain allure to living dangerously. Shane McConkey was the embodiment of that belief. Now before this documentary, McConkey, I had never heard the name; however; suffice to say I believe I now have a good idea who this fearless individual is, or should I say who he was.

He was a man who was absolutely in love with the thrill of skiing and thrill-seeking; he made no excuses for the way he chose to live his life, and he did things on his terms all the way up until the tragic skiing accident that ended his life in 2009.

The documentary is stockpiled with interviews from the very people who knew McConkey best as well as plenty of interview footage of type with the man himself; it would appear that McConkey was as passionate about filmmaking as he was about skiing. I will say that film had an intriguing approach; normally I’m used to seeing films about people who color inside the lines and follow a strict course of action to reach the point they are looking to reach (college, etc.). That was not exactly the case with McConkey, who actually failed out of college. However, do not allow that to mislead about the man; he was an innovator nonetheless, ushering in techniques that have forever changed skiing. Another aspect the film highlights quite well is his energy, his sense of humor. I can think of two portions of archive footage of McConkey competing that are guaranteed to drop your jaw. It certainly dropped mine.

Another jaw-dropping portion will be when they talk about the ill-fated accident.  The tragedy is the knowledge that this was jump that McConkey had made several times before; you’d expect that it would simply be like every time before, especially given what we learn about McConkey and the amount of time and effort he put into strategizing every aspect of the jump.

“I’m getting maximum enjoyment out of life, and I’ll never stop. I’ll be poor the rest of my life so I can have fun.”

Words he continued to live by until his dying day; where some may look over the edge of a cliff and decide against taking the risk, McConkey chased the ultimate thrill. Throughout my viewing of the documentary, I experienced mixed emotions for man who undoubtedly has a dual legacy (one as a skiing legend and another as a cautionary tale); though one can’t help but admire his dedication to his way of life and his passion for achieving his dream, it also raises the most basic question: perhaps had he been a little less determined, would he still be alive today?

Jeremy Butler is a film school graduate of the International Academy of Design and Technology. He is been writing for Upcomingdiscs since 2012; however, movies have played a big part of his life for much longer. Favorite genres include horror, science fiction/fantasy, and comedy. Favorite movies are V for Vendetta, Boondocks Saints, Kiss Kiss Bang Bang, and The Godfather.
Banshee Chapter Finding Faith