Posted in: No Huddle by Brent Lorentson on February 5th, 2014 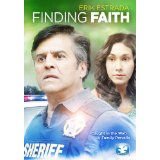 When I first looked over the DVD art for Finding Faith the first thing that had me scratching my head was, how does someone do a family-friendly film about kidnapping and sex trafficking?  This is supposed to be inspired by true events and is a film dealing with individuals and their faith in God during their time in need.  The cherry which actually convinced me to give this film a chance is that it stars Erik Estrada (Mr. Poncherello himself from the TV series CHiPs).  As a childhood fan of Estrada, this film was pretty much impossible to resist.

The film opens with a narration from Sheriff Brown (Estrada) as he discusses all the bad things he’s encountered throughout his career but leads us into our story that is about finding good in a bad situation. At a ranch somewhere hidden away in the mountains a suspicious-looking man approaches; tending to a horse inside is a young female that the man seems to be looking for.  Is he an innocent visitor or is something more sinister at play?  This is quickly answered when the female pulls again, and members of law enforcement close in to make the arrest.  For anyone who has seen To Catch a Predator, this is a familiar sight.

When we meet Faith (Stephanie Bettcher), she’s your typical 13-year-old who is obsessed with social media and staying connected to all her friends.  To make her all the more likeable, she is even a responsible member of her youth group.  Though she may not have a boyfriend, a suspicious suitor from out of state begins to communicate with her via text and other social media outlets.  Not to spoil anything, but the young boy she thinks she is talking to actually turns out to be Edwin (Jonathan Philips), who is a far cry from the innocent teenager he claims to be.

After being snatched up by Edwin and his girlfriend who is toting around an infant child, Faith endures her ordeal with simply her faith in God to protect her.  But Faith is not the only one enduring a crisis of faith; her father Sam (Jamie Watson) is faced with self-doubt and questions his faith considering he feels he did all that was expected in being a good father, but yet this tragedy still hit his family.  Having never been in this situation I don’t know how I would handle my beliefs one way or another, but I can appreciate the added stress this would put any father under, especially when the law enforcement officials surrounding you seem to want to prepare you for the worst case scenario.

I can appreciate that this is a family-oriented film that is trying to make families and teenagers aware of the dangers of social media.  My problem is that the film played things too safe and generic; for instance, when we meet the villains there is never a moment of doubt, we know these are the bad guys.  In the real world, though the bad guys are not so obvious, and the film simply played it safe with having these cardboard bad guys who lack anything that could make them likeable.  Considering the film is produced by Christian backers, I understand the need to throw in the faith element of the film, but really it just came off as being a forced subtext more than anything.  I see the argument can be made that little miracles are sprinkled throughout the film, but is it something to really make as an argument for having faith, or simply good detective work?  Perhaps that was the purpose of the film as well to create that discussion; after all, the film does openly promote the need to discuss the subject matter throughout the film.

Is this a film that kept me glued to my seat as it shocked me with its twists and turns?  Not even close.  But for what it is, I see it falling in the category of your typical movie of the week.  Looking at it with reined in expectations, it’s not half bad.  Stephanie Bettcher carries a lot of the film based on her performance; though it felt a little uneven from the start, as the film reached its more intense moments she did a commendable job.  If you are a parent with kids spending hours throughout the day on social media outlets, this is a movie that could help open the conversation to the threats that are only a profile and a click away.  Me, I just avoid those with screen names like Bodaciousbuns1980.

Brent Lorentson is a horror writer and film critic based out of Tampa, Florida. With a BA in Digital Film, he co-wrote and co-directed Scavenger Hunt. His short stories have appeared in various horror anthologies. In 2019 his short script Fertile Blood will be a part of the anthology horror film Slumber Party. He is currently working on his first novel A Dark and Secret Place set to be released in late 2019. Favorite Films: Taxi Driver, Fight Club, I Saw the Devil, The Wild Bunch, Dawn of the Dead, A Clockwork Orange, Pulp Fiction, Heathers, The Monster Squad, and High Fidelity.
McConkey Bonnie & Clyde (2013) (Blu-ray)