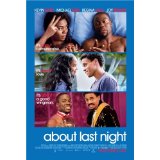 “What are we fighting about now?”

About Last Night isn’t the first — and certainly won’t be the last — movie about adults taking clumsy, tentative steps toward commitment. Heck, it’s not even the first movie called “About Last Night” to tackle the subject. The film is one of a whopping *three* remakes of 1980s hits descending on screens this week. I could easily bemoan the general lack of imagination in Hollywood, but by now that sort of rant is almost as unoriginal as all these remakes. Besides, I’d rather spend my time talking about this engaging, formulaic, frequently funny movie.

We’re quickly introduced to two pairs of friends on their way to meet each other at a bar: Danny (Michael Ealy) and Bernie (Kevin Hart) are co-workers at a restaurant supply company, while Debbie (Joy Bryant) and Joan (Regina Hall) are roommates. The bombastic Bernie and equally loud Joan have already hooked up and are relaying the graphic details of their tryst to their respective best friends. The pair’s not-so-subtle plan is to set up the lovelorn Danny and unlucky-in-love Debbie with each other. The plan works as Danny and Debbie flirt and fall into bed during their first night together.

Turns out Danny and Debbie genuinely enjoy each other, so they eventually start dating and spending time together during the daytime hours. Against the frantic warnings of their volatile best friends, Danny asks Debbie to move in with her.

Unfortunately, as the temperature cools — time in the film is marked by seasonal title cards like “About Fall…” “About Winter…,” etc. — so does the fire in Danny and Debbie’s relationship. The couple is plagued by a variety of issues, including insecurity (Debbie makes more money than Danny, who isn’t even passionate about his job) and jealousy (both Danny and Debbie deal with strong temptation when they’re at their most vulnerable). But aren’t these the sort of problems that crop up in even the most loving relationships? Or did Danny and Debbie mistakenly try to turn a one-night-stand into something more than it was?

These questions are not unique to any particular time, place or ethnic group, and that’s what made About Last Night… a better-than-average target for the remake treatment. It also helps that not too many people consider the 1986 original — starring Rob Lowe and Demi Moore during their Brat Pack days — an untouchable classic.

Both movies are based on David Mamet’s 1974 play “Sexual Perversity in Chicago.” The new film ditches the ellipses in the original’s title and transplants the action from the Windy City to Los Angeles. About Last Night features a few forced nods to its source material. At one point, Danny and Debbie can be seen watching the original film on TV and claiming it’s their favorite movie. In another scene, Danny awkwardly drops the term “sexual perversity in Los Angeles” into a conversation. Thankfully, this R-rated remake also finds less on-the-nose ways to reference the “sexual perversity” part — one of the many sex scenes may or may not include a chicken costume — and surprisingly captures the spirit of Mamet Speak, which is characterized by lightning fast, overly profane dialogue.

If you’re looking for “lightning fast” and “overly profane” in 2014, chances are you’re going to run into Kevin Hart. The ubiquitous comedian already has a smash hit this year with Ride Along and will reprise his role (alongside Ealy and Hall) in the upcoming sequel Think Like a Man Too. In About Last Night, his Bernie is all id to the point where you seriously question how a person like that can hold down a full-time job. Fortunately, Hart also gets off more than his share of inspired, rapid-fire zingers. More importantly, he meets his motor-mouthed match in Hall, a feisty, screechy presence — at her highest pitch, she sounds remarkably like Estelle Costanza — who helps keep the over-the-top comedian in check. The duo also represents the effects breakups can have on friendships; at one point Bernie compares Lando Calrissian’s association with Darth Vader to his own friendship with Danny, if Danny were to treat Debbie badly and become a villain.

At first glance, it doesn’t seem like Ealy is doing much with his performance as smooth, go-with-the-flow Danny. However, the actor provides an intriguing, imperfect center for the film. Meanwhile, Bryant has a similar challenge to Ealy, standing out next to a more manic co-star. She’s a decent “straight man,” but the role of Debbie isn’t quite as meaty as Danny. Either way, I liked that these characters’ romantic hesitation came from past emotional bruises, rather than them just being immature or ditzy jackasses.

Director Steve Pink (Hot Tub Time Machine) and writer Leslye Headland (Bachelorette) keep things moving at a brisk, unhurried pace. (At least until the abrupt ending.) There are a couple of scenes — probably one too many — where separate conversations between the two pairs of friends intersect at amusing points. Pink also knows where to put the camera to take full advantage of his easy-on-the-eyes cast. This remake is nowhere near good enough to inspire outrage when someone decides remake it again in 30 years with an all-Hispanic cast. (“Lo De Anoche.”) But it’s certainly a fun enough option for your more immediate Valentine’s Day plans.

Valentine’s Day Spotlight: Nicholas Sparks: Limited Edition Collection And Then There Was You