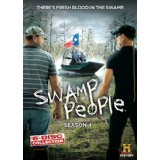 “The way of life depicted in this program dates back 300 years. Hunting, especially alligator hunting, lies at its core. Some images may be disturbing. Viewer discretion is advised.”

And they’re not kidding. Gator hunting is a bloody business, and this show gets you right up close and in the action. The hunters set hooks with bait, and once a gator is hooked they must reel it in and shoot it in a very small vulnerable spot in the back of the head. Let me warn you that animals were indeed harmed in the making of this film, and you’re going to witness that harm. If you’re an animal activist, I suggest turning to the Disney Channel for this particular hour. The rest of you will get a front-row seat to a truly thrilling non-stop alligator hunt.

Leave it to History to find yet another profession that they can deliver to our living rooms and home theaters so that we can be entertained by someone else’s reality. When I first heard the title of Swamp People, I had something entirely different in mind than what I ended up with. I guess I was prepared for some hidden creature-folk who might be spotted between the swamp gas and the Spanish Moss Monster from an old Kolchak episode. Perhaps those are the images they intended for us to conjure, at least at first. But these swamp people are regular hardworking stiffs like the rest of us, only they make their living off the swamp itself. It provides food, transportation, income, and entertainment. Much of their Cajun lifestyle has been handed down for centuries from generation to generation, and one of those traditions is gator hunting.

When I was young, alligators were considered somewhat of an endangered animal and protected in most places. A lot has changed in that time, as I’ve come to discover firsthand as a resident of Florida these days. Gators sun in my own back yard on occasion, and they’re pretty much everywhere. In Louisiana, the state game folks have been dealing with the rising population of gators by authorizing a limited 30-day hunting season. Not just anyone is permitted to hunt the prehistoric reptiles. They must purchase hunting rights to the areas they will hunt, and they must buy the limited number of tags they can use during that season. Failure to use all of their tags means less at their disposal the next year. But a good hunter can take over 200 gators out of the swamps in that time. Obviously, we’re going to meet some very good gator hunters on this show.

This year the season gets off to a five-month delay as Hurricane Isaac ravages the area. Once it has passed, the hunters will find the waters have been changed. Some areas are now choked up with debris, leaving some to take huge chances to get over them. The debris also robs the swamp waters of their life-giving oxygen. This leads to a huge fish kill that allows the gators to eat their fill, ignoring the tasty treats on the bait lines. Still, the season must go on, and we’ll watch these hunters deal with these challenges in their own unique ways.

They’ll take more chances this season. Their livelihood depends on filling the tags, and the delays will lead to some acts of desperation. Of course, this makes for far more dramatic television. Their risk is your gain. Two of the hunters get down and wrestle with the gators, one to save his dog and another to keep from losing a big gator. You’ll see more of these dramatic events than in seasons past.

This year the show also includes a Texas invasion. T-Roy and Bigfoot (named because he never wears anything on his feet) arrive from the Lone Star State to take advantage of a couple of weeks of the Louisiana season before theirs begins in Texas. They’re cocky and full of Texas pride. This leads to a bet with Troy Landry. They put up a supposed $3,000 scabbard against a home-cooked meal. Naturally, the contest comes down to each of their last gators of the bet period.

The King of the Swamp is still Troy Landry. He consistently brings in the big gators and fills 360 tags in the month-long gator season. He does it this year through some serious obstacles. He has more than the hurricane and cold fronts to deal with. He’s up against poachers stealing his gators, duck hunters cutting his lines, and an injury toward the end of the season that threatens to sideline him with precious tags to fill. He’s helped by his city-boy son Brandon who takes a leave of absence from a city job to pitch in…until the boss calls wanting him back in the office.

Liz returns as the only female captain on the show. She’s joined by her daughter when her partner has to deal with hurricane damage at her cattle ranch. They provide some perky moments, and Liz is recovering from gallbladder surgery. Later Glenn pitches in until finally Liz gets her regular partner back.

Junior shoots his son one too many times and ends up needing his wife to pitch in. Bruce has a terrible start to his season until he finally brings his dog Tyler back on the boat. Of course, Tyler ends up threatening Bruce to not tag out two years in a row. That will mean loss of tags next year and maybe even loss of hunting rights. He also bags something called a yellow gator, which isn’t really yellow at all. It brings allegedly bad luck to the entire swamp until Native American RJ gets his tribe to perform an exorcism of the “evil spirits”.

Those who are regular viewers know that before the fourth season one of the cast members died. Many of the most entertaining segments used to feature two brothers who weren’t actually gator hunters. Rather, they were the real swamp people, living almost entirely off the swamp. Of course, I’m talking about Mitchell and Glenn. Younger brother Mitchell passed, and there are a few segments featuring Glenn dealing with the loss and the work of his community of friends to keep his spirits up.

The show spends most of the time following the hunters out on the swamps. But you do get to spend some time checking out their families and some of their traditions. They work hard, and some of them play just as hard, and the History cameras are there to cover it all for you. Now it’s all available on DVD.

The cast is bigger, and the hunting is a little wilder. Still, the stars of the show are the hundreds of gators that these guys bring in each season. This is the kind of show where you know exactly what you’re getting into. You think Survivor is a reality show? This is real survival. The kind of job where the only way to survive is “Shoooooot!”

Gino Sassani is a member of the Southeastern Film Critic's Association (SEFCA). He is a film and television critic based in Tampa, Florida. He's also the Senior Editor here at Upcomingdiscs. Gino started reviewing films in the early 1990's as a segment of his local television show Focus. He's an award-winning recording artist for Omega Records. Gino is currently working on his 8th album Merchants & Mercenaries. Gino took over Upcomingdiscs Dec 1, 2008. He works out of a home theater he calls The Reel World. Favorite films: The Godfather, The Godfather Part II, The Body Snatcher (Val Lewton film with Karloff and Lugosi, not the pod people film), Unforgiven, Gladiator, The Lion King, Jaws, Son Of Frankenstein, The Good, The Bad And The Ugly, and Monsters, Inc.
The Reverend The Americans: The Complete First Season (Blu-ray)