Posted in: No Huddle by Brent Lorentson on February 15th, 2014 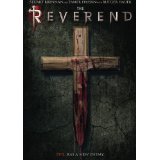 The idea of a vigilante priest hitting the streets to clean up crime is something I can easily get behind. The Reverend is said to be an adaptation from a graphic novel of the same name, though it’s a title I found very little about when doing a cursory search over the internet.  What I did find had the plot centering on a Reverend caught in the trappings of the battle between good and evil. Mixing in a supernatural element, some may start to think about The Preacher graphic novels; well, don’t fret, this film doesn’t pack the punch that those beloved graphic novels do, but it’s a noble attempt in the indie horror collection.

The film does open promisingly enough as Rutger Hauer plays the role one would assume to be as something evil, while confronting a man in white surrounded by several officials of the church armed with swords  Some may recognize Doug Bradley (Pinhead from the Hellraiser series) as Reverend Andrews.  The heated exchange is a negotiation over the soul of an individual.  This scene is an introduction to the forces of good and evil doing their bidding for winning souls onto their side.  Unfortunately the scene simply works as a cold opening to do nothing more than show us that religious figures in the church are at odds with those who are evil.  Basically a common-sense notion, and the scene bears no importance on the film that follows.

The Reverend (Stuart Brennan) has just completed seminary school and travels to a quaint idyllic village where he is to take over and begin services at their chapel.  It doesn’t take long before the Reverend discovers things are not as innocent as they may seem.  A young woman comes into his chapel and attacks the Reverend; this isn’t any mugging, but instead she turns out to be a vampire, and as in most cases her bite causes the Reverend to change.

Though these are supposed to be vampires in the film, it seems the filmmakers took a cue from the Twilight series and decided that the long-established lore of the vampire is simply not important to horror fans.  This frustrates me to no end seeing a vampire walking around in daylight and even functioning in a church, but yet a stake through the heart will cause them to burst into flames.  Granted, I needed some ice by the end of the film due to all the face-palming out of frustration, but still I trudged along.

There is an interesting sequence between the Reverend and the woman who changed him.  The scene is supposed to take place in the original garden where Eve was once tempted, and now it is the Reverend who is being tempted with his new abilities.  It’s moments like this that save this film for me, because there is at least an attempt to show us something new.  Unfortunately there isn’t enough of this, but instead we get numerous scenes of the Reverend literally taking a bite out of crime while he patrols the streets at night and is hunting criminals.

As the film builds towards its finale where the Reverend has to square off with the town’s crime boss and all his cronies, I found it hard to even care about what was even going on.  The characters are so paper-thin that it’s hard to care one way or the other about who lives or dies; there simply is no investment in these characters.  Is this a terrible movie? No, but it’s a film that was set up with so much promise that by the time the credits roll, had it not been for this review I would have dismissed and forgotten this film.  It’s a shame, because the front half of this film showed plenty of promise.

Brent Lorentson is a horror writer and film critic based out of Tampa, Florida. With a BA in Digital Film, he co-wrote and co-directed Scavenger Hunt. His short stories have appeared in various horror anthologies. In 2019 his short script Fertile Blood will be a part of the anthology horror film Slumber Party. He is currently working on his first novel A Dark and Secret Place set to be released in late 2019. Favorite Films: Taxi Driver, Fight Club, I Saw the Devil, The Wild Bunch, Dawn of the Dead, A Clockwork Orange, Pulp Fiction, Heathers, The Monster Squad, and High Fidelity.
And Then There Was You Swamp People: Season 4