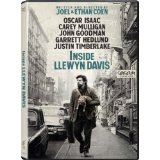 Joel and Ethan Coen have been churning out hits for decades.  From Raising Arizona to Fargo and No Country For Old Men as well as many cult hits in between, the Coen brothers have a unique voice that has led to their long success in the Hollywood system.  With their new release, the Coens delve into the Greenwich Village Folk scene in the winter of 1961.  It’s a time that most audiences (myself included) may not be very knowledgeable about. The Coens take on this niche genre of music and present an engaging tale about a struggling musician and his journey to find success in an industry that at the time had a deaf ear to Folk.

Llewyn Davis (Oscar Isaac) is a guitar playing folksinger, his act recently going solo after his partner dies.  When we first meet Llewyn he’s playing at The Gaslight, a club filled with musical acts on the rise.  After his set Llewyn is told by the club’s owner that there is friend waiting for him outside; as it would turn out the so-called “friend” has a grudge to settle with Llewyn.

We then flash back to the events that would later find Llewyn down and out in an alley.

Llewyn is a natural gypsy of sorts, travelling from one couch to the next with no real place to call home.  After being locked out of a friend’s home for whom he is cat sitting, he and the cat travel about town till his friends can return home and when he can in turn bring back their cat.  Walking the winter streets of New York with a cat in tow of course gets Llewyn some curious looks, but that doesn’t concern him.  Instead his concern seems to always fall on where his next gig will be.

With his options limited, Llewyn drops the cat off at Jean’s (Carey Mulligan) apartment.  The two previously had a brief fling, while she has been dating Jim (Justin Timberlake) who also is her musical partner. Jean has also recently discovered she is now pregnant but does\ not know who the father is.  In her disgust for Llewyn and his penchant for bad luck, she feels an abortion is the best option for fear the child may be his and her concern the child will be no different.  It’s these interactions with Llewyn where I feel the most sympathy; after all, he seems to want to do the right thing, but unfortunately no matter the decision or his actions it seems he will always be declared the one in the wrong.

Jim being the nice guy that he is offers Llewyn a chance to sit in on a recording session for a new song he’s been working on.  This scene introduces Al Cody (Adam Driver, who is in talks to be a villain in the upcoming Star Wars film) who lends his unique vocal styling to the piece and whose couch Llewyn later crashes on.

As Llewyn continues his travels he manages to lose the cat on several occasions only to find him (or her) in other unique locations.  The film is a journey for both Llewyn and the cat, just as the Coen’s earlier explored the travels of the Bluegrass group in O’ Brother Where Art Thou.  The cat’s journey is clearly a more straightforward one, but for Llewyn his is one on an internal level, coming to terms with the passing of his partner after their release of the album. Inside Llewyn Davis seems to be something of impossibility.  The constant reminder and suggestion to get back together with a partner who is deceased, or hearing others singing the harmonies his partner Mikey would sing, these are all reminders that dig into the unhealed emotional wounds.  Is Llewyn simply unlucky in life, or does he bring it upon himself?  Personally I believe he’s simply an individual who despite all his noble attempts to do the right thing luck just seems to pass him by.

Recently the Coens have relied upon Roger Deakins as their cinematographer, but with him working on Skyfall this meant they had to look elsewhere to fill the gap.  Bruno Delbonnel (who did exceptional work on Amelie) was the man to step into the big shoes.  Though Deakins has helped create a distinct look for the Coens over the years, what Delbonnel brought to Inside Llewyn Davis was exceptional photography that captured the cold and the Folk scene beautifully.  The cold steely blues through the film, the look of the interior of the clubs as the singers perform, it’s easy to see why his camera work was nominated for an Oscar.

I love this film.  This ranks up there as one of my favorites by the Coens, and after watching the film twice, the second time I caught more nuances, whether it be the performances or on the technical side.  It’s a film that at first glance I understand why most audiences didn’t rush to the theaters to see it.  But this is what to me great cinema and art is all about.  Will people disagree with me on this? Sure, but that’s the beauty of art.  Film, music, a painting, a poem, a book, it all has the ability to reach out and affect us while the person beside us may walk away with utter ambivalence.  This is a film that crawled beneath my skin and reminded me why I love film.

Brent Lorentson is a horror writer and film critic based out of Tampa, Florida. With a BA in Digital Film, he co-wrote and co-directed Scavenger Hunt. His short stories have appeared in various horror anthologies. In 2019 his short script Fertile Blood will be a part of the anthology horror film Slumber Party. He is currently working on his first novel A Dark and Secret Place set to be released in late 2019. Favorite Films: Taxi Driver, Fight Club, I Saw the Devil, The Wild Bunch, Dawn of the Dead, A Clockwork Orange, Pulp Fiction, Heathers, The Monster Squad, and High Fidelity.
12 Years a Slave (Blu-ray) In Fear (Blu-ray)