Posted in: Disc Reviews by Brent Lorentson on March 11th, 2014 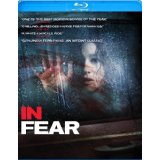 When you are first getting into a relationship those first few weeks can be pretty awkward at times as the two of you get to know one another.  The decision to go on a road trip early on in a relationship is simply one of those gambles that can go either way, but if the trip goes well, then of course the future of this budding romance is all the more promising.  In Fear follows a couple that bravely decides to take a road trip together so they can see a concert; unfortunately for them, it’s the road trip from hell.

Tom (Iain De Caestecker) and Lucy (Alice Englert) are the young budding couple that have decided to take the scenic route to the concert after experiencing an off-screen confrontation inside a small town pub.  Since the altercation is never seen and only hinted at by our leads, it doesn’t take long be submersed in the suspense that follows.  Once the two decide on staying overnight at a hotel, it’s not long before they get turned around and lost along the backwoods roads.

As the two seem to just constantly go round and round, is this simply just driver error, or is there something more malicious afoot?  The doubt continues to linger with every decision Tom seems to make; perhaps this isn’t just a matter of getting turned around, but instead he has ulterior motives.  But as the day grows long and night falls, it seems a real sense of fear comes over our characters as they are hopelessly trapped in the middle of nowhere.  Yet things only continue to grow stranger as Lucy believes she sees strange men hidden in the woods, and all the more strange as they venture down a narrow road they find her clothes scattered about.

Twists continue to follow as the film goes on, and what helps drive this film are the performances of the leads.  At points in the film it feels as though neither actor really knows what is going on; this is in large part due to the fact that a good portion of the film was improvised and the cast wasn’t let in on the plot till the day of shooting.  With the film also being shot chronologically, the actors’ confusion lends even more believability to the film’s mystique.

Set almost entirely in the car, we are along for the ride, though at times the film does seem to drag, but to the film’s credit, the isolation is what adds a heightened level of suspense.  Though the film may not follow traditional horror rules, unfortunately it does rely heavily on using loud noises to create jump scares.  This is cheating in a way, but to the film’s credit the film was creepy without the added effects.

When Tom and Lucy do come across a random stranger in the road, things really seem to go off the rails and it simply lost all its believability points.  After all, you’re in the middle of the woods and have possible people chasing you, do you really feel that’s the time to pick up a random person on the road?

In Fear is presented in its original aspect ratio of 2.39:1. The 1080p image is arrived at with an AVC MPEG-4 codec at an average of 27 mbps.  Though the film is mostly shot in the woods, this isn’t a film that aims for lush cinematography.  Instead we get a very cold and dreary look.  It’s still a very crisp image, but the camera operators seem to be going for a more practical look than an over-produced look.  To add to the look it appears to have a more saturated look during the daylight hours.  The night shots actually offer plenty of detail.  Though there is one sequence where the lighting felt a bit much; it occurs as one of our leads wrestles a potential villain in the mud and rain. What I did have a problem with were the multiple camera rig shots attached to the car; it’s good to have variety, but seeing wheels turn just does nothing for me.  As for the shots in the car of the performers, we get a variety of close-ups, but when the extreme close-ups occur, I understand it’s for dramatic effect, but it’s still a bit much as well.

The Dolby TrueHD 5.1 track is never fully utilized in this film, and it’s a shame, because there was some great potential here, but it just never came through.  The only points that stood out come along when the filmmakers are attempting to get a cheap scare.  Considering the film does take place inside a car, the limited dynamic range of sound is to be expected.  Sound is simply one of the crucial elements to creating suspense, and with the exception of a scene where the car alarm keeps going off suspiciously, the audio was just wasted.  Fortunately the dialog comes through crisply.

Behind the Scenes: (12:50) A brief but informative look at the creative process behind the film.  Here we get to hear how the director took his unique vision on telling the story and filming it without having a traditional script.  This is the kind of making-of I wish was equal in length to the film, because I simply would have loved to have heard his insight behind a few of the scenes, most particularly in the final act.

As an experimental indie film this showed so much promise at the start, but once the film hit the midpoint the payoff just wasn’t worth it.  Had nothing happened and this turned out to be a horror version of Before Sunset and just seeing a couple together lost in the woods and dealing with it, that movie would have worked so much better.  Throwing in all the weird twists instead of being clever instead just pulled me out of the film.

Brent Lorentson is a horror writer and film critic based out of Tampa, Florida. With a BA in Digital Film, he co-wrote and co-directed Scavenger Hunt. His short stories have appeared in various horror anthologies. In 2019 his short script Fertile Blood will be a part of the anthology horror film Slumber Party. He is currently working on his first novel A Dark and Secret Place set to be released in late 2019. Favorite Films: Taxi Driver, Fight Club, I Saw the Devil, The Wild Bunch, Dawn of the Dead, A Clockwork Orange, Pulp Fiction, Heathers, The Monster Squad, and High Fidelity.
Inside Llewyn Davis Congratulations To Brent Lorentson On 200 Reviews