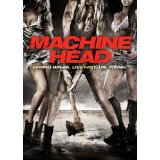 It’s spring break, and you know what that means, college co-eds are taking a break from hitting the books and are up for getting into reckless debauchery, heavy drinking and plenty of things they hope their parents never find out about.  It’s not as though horror films ever need an excuse to make mincemeat of bikini-clad girls, and for fans of the genre, the more bikini clad girls the better.  Along with the pretty faces, though, we horror and gore hounds do enjoy a good story tacked on for good measure.

Horror fans can excuse a film for some bad acting or cheesy effects so long as a story is there.  In the case of Machine Head, it starts off by hitting the right stereotypical notes but then quickly falls apart.

Rachel (Sharon Hinnendael) is excited to get to see her two best friends since the three of them go to separate colleges.  Thanks to one of her dad’s clients, her girlfriends along with a few gentlemen suitors will be crashing at a luxurious house for their spring break.  The house is stuck out in the middle of the desert, but that’s not a problem, since the girls plan on being preoccupied between the boys, drinking and tanning.  The hiccup in Rachel’s plan comes with the fact her sisters Sarah & Nikki (played by real life sisters Norissa and Alana  O’Mara) have to tag along, one of whom has just been released from a mental hospital.  Now this bothers me on a parental level; seriously, you want your daughter who has just been released from a mental hospital to go away into the desert with her older sister where you know she plans on doing nothing but drinking and other various activities.  What parent does this?  Should they even be allowed custody of their kid, considering they are happily tossing the responsibility onto their twenty-something daughter?  I know this is a film review, not the policing of moral authority, but it just strikes me as unbelievable that this would ever occur.

As the girls set out on the open road, they are harassed by the driver of a mean-looking muscle car.  Unbeknownst to the girls, there is a serial killer on the loose killing people along the highway who has been given the handle Machine Head.  The comparisons to Duel, Death Proof, or the opening to Jeepers Creepers are impossible to ignore, especially since the other films were able to build this suspense so well.  Here, though, there is no suspense; if anything as the girls scream at the car and one another, I just hoped that perhaps the driver would just run them off the road already.

The girls unfortunately make it to the house unscathed and quickly get settled in for some poolside fun as they await the arrival of the guys.  Rachel hands her siblings some money and the keys to the car asking them to go into town and let the girls be alone for a few hours.  Reluctantly the girls take the money and head off into town.

I was grateful for the opportunity the film took to put the girls into their bikinis, because quite frankly the plot was already having me looking up at the clock.  What makes the film feel so long are the numerous time-lapse shots that are added in for no better reason than to make the film that much longer.  Factor in how the killer seems to know where the guys are on the highway as well as the where the girls are, it doesn’t take much to realize someone is helping the killer out.  But who could it be?

The biggest problem is that there is simply no depth given to any of these characters.  The girls when we are with them are shallow, and aside from their looks are simply unlikeable characters.   Is this intentional, and the viewer is supposed to be rooting for the killer, or is bad writing at fault?  Just because someone has most of the speaking parts does not mean they are the protagonist.  Every character here can be swapped out for another; no character makes a transition, so what is there to care about in this film?  The most interesting character, the “crazy” sister, we don’t spend nearly enough time with, and if you watch a film like You’re Next which does take the time to explore sibling rivalry, you see the difference a solid script and character development make.

Brent Lorentson is a horror writer and film critic based out of Tampa, Florida. With a BA in Digital Film, he co-wrote and co-directed Scavenger Hunt. His short stories have appeared in various horror anthologies. In 2019 his short script Fertile Blood will be a part of the anthology horror film Slumber Party. He is currently working on his first novel A Dark and Secret Place set to be released in late 2019. Favorite Films: Taxi Driver, Fight Club, I Saw the Devil, The Wild Bunch, Dawn of the Dead, A Clockwork Orange, Pulp Fiction, Heathers, The Monster Squad, and High Fidelity.
Dark House (Blu-ray) Contest: Angels In The Stardust From Arc Entertainment