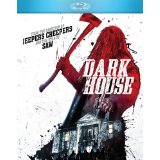 Sometimes a horror movie comes along that is rich in originality and ideas. Dark House certainly fits into that category. There are some truly scary moments and seriously frightening images to be found here. For a low-budget affair, the movie sports pretty solid acting and an atmospheric production design. Writer/director Victor Salva knows how to get the most out of the resources at his command. That doesn’t mean there isn’t a serious flaw to be found here. This is a movie that is often a little too clever and more than a little enigmatic at times. It won’t allow itself to be contained into any particular style or sub-genre, and that’s a good thing. If only all of this didn’t also get in the way of telling a tight story, this could have become the next cult classic. If wishes were horses….

Nick (Kleintank) is searching for answers about who he is. His mother has spent the last several years in an insane asylum, and he’s visiting her for the first time in years. He’s hoping she’ll tell him who his father was. It’s his 23rd birthday, and apparently that’s a magical number in nature. As it turns out, Mom’s promised to tell him this day. No, she hadn’t promised Nick. She’s talking to something inside the walls. Unfortunately, a breakdown nixes the big reveal, and a disastrous fire at the asylum later that night forever seals Mom’s lips.

Enter the standard lawyer fulfilling the requirements of the will, a duty he owes dead mom and something in the walls. It’s a file filled with papers and the deed to a strange house that Nick has never seen before but has been drawing since he was a child. It’s time for a road trip, so he gathers his now-pregnant girlfriend Eve (McKenna) and best friend since childhood Ryan (Perez), and they head to the town of River’s End where they discover the house and most of the town has been swept away by a flood 20 years earlier. But the name of the movie is Dark House, and there’s going to be a dark house.

They come upon a surveillance crew headed by everyone’s favorite bully Scott Farkus, Zack Ward as Chris along with a few more fodder… friends. You see, legend has it the house was merely relocated by the flood and is still standing somewhere. Of course, in a matter of a couple of hours they stumble upon the large structure, which had crashed into and come to rest against a huge “hanging” tree. But it is not vacant. The shadowy figure of Seth, played by Jigsaw himself, Tobin Bell, emerges to warn the young folks to leave. From there things get a bit convoluted and harder to follow. Twists are turned and secrets are almost revealed in a case of “who are the good guys and who are the bad guys”.

As I’ve already mentioned, this film has a ton going for it. There is a horde of hatchet-wielding specters that roam these environments, and they are some of the creepiest creatures I’ve encountered in a long time. A combination of appearance and very chilling movement make these guys a real treat for anyone looking for a scare. Tobin Bell is outstanding as the mysterious Seth. With long hair and dark garb along for the assist, Seth appears much more forceful here than he ever did as Jigsaw, and that’s saying something. This is one of those perfect examples of casting. I can’t imagine anyone else doing what Bell does here. These guys lucked out big time when they snagged him into their little picture.

Of course, the rest of the cast isn’t bad either. The weakest performer happens to be Luke Kleintank as Nick, which is unfortunate because he’s trying to carry the lead. Unfortunately, he’s outclassed by everyone else around him, and his dry delivery takes a little something away from these pivotal twists and turns that so thoroughly involve his character.

The good news is everyone else is good enough that we get to know these characters, and they’re just not cardboard cutouts to be taken out by the big bad. In fact, if you’re looking for a gore fest, this isn’t that kind of film either. Sure, there are a few kills, but not many, and really not as bloody as you might expect. There is one free-for-all massacre that gets played out in under two minutes. You see nothing except the aftermath of bodies littered along the way. It’s obvious here that these guys were going more for the complicated story than mere gore and violence.

The best thing Dark House has going for it is its atmosphere. Everything from the aforementioned hatchet spirits to the house itself is overpowering and thick in atmosphere. Not a lot of money here, but every cent counted. This is obviously one of those films where everyone pitched in to make it happen, and the results are impressive on the screen. The house has more character than any I’ve seen in a long time. Apparently it’s one of two of its kind and sits in the woods in Mississippi. It was a fortunate find. The house has creepy lines and is covered with dead vines. There’s a little CG assist on the side that was crashed into the tree. I get the impression the place was just as startling in real life.

Unfortunately, things can be too clever. Some of the twists are fun, and I liked that they were able to pull of a surprise or two without faking it. You know what I mean. They didn’t cheat them. Look again and you’ll see they stayed consistent throughout. Some of the reveals were a bit over the top and not helped at all by Kleintank’s hamming it up all over the place. I’d love to be more specific, but there’s enough cool reveal here that it would be a disservice to both you and the film to talk about them here. We tend to try and operate in a spoiler-free environment here. Even with story getting in its own way, it’s totally worth a trip just to experience the production design. Take the ending with your tongue planted firmly in cheek and you’ll get out OK and feeling entertained, even if not to the bitter end.

Dark House is presented in its original aspect ratio of 2.39:1. The 1080p image is arrived at with an AVC MPEG-4 codec at an average 30 mbps. With this high-definition image presentation, it’s all about the crisp black levels. The shadows deliver the real beats in this film, and fortunately, this is a very nice example of fine shadow definition. I’ve talked a lot about the production design, and it would have all been for nothing without a solid transfer that delivered nice tactile textures and rich detail.

The DTS-HD Master Audio 5.1 is all about the fine detail. The surrounds are not aggressive but there is always just enough there to suck you in and drive a few of those spine-tinglers. I was most impressed with how well the sound design makes use of subtle subs to add a richness to the slight sounds to enrich the acoustic environment. It all sounds like it actually takes place in the right environments. Dialog comes through just fine. I particularly like the sound of the “animal” moving inside of the walls. Anyone who has actually experienced that situation knows what I mean.

The Making Of Dark House: (20:44) Plenty of behind-the-scenes footage brings the production to life. Everyone participates, including Bell. The downside here is co-writer Charles Argon, who is too full of himself for my tastes. He’s patting himself on the back at every turn. I don’t like it when someone calls their work perfect. If he believes there’s no room for improvement here, he’s doomed to make the same mistakes over again…and trust me, Chuck. The script is far from perfect. Your behind was saved by an amazing production design among other things.

There’s plenty of room for a sequel here, and it’s pretty much shouted at you in the film’s coda. This is the only place the film gets obvious and predictable. I’d actually like to see more. Just lose Chuck and Kleintank and you might actually come closer to perfection, guys. Sequels are tough, particulary when you want to be so unpredictable.  “It’s like trying to remember a dream.”

Gino Sassani is a member of the Southeastern Film Critic's Association (SEFCA). He is a film and television critic based in Tampa, Florida. He's also the Senior Editor here at Upcomingdiscs. Gino started reviewing films in the early 1990's as a segment of his local television show Focus. He's an award-winning recording artist for Omega Records. Gino is currently working on his 8th album Merchants & Mercenaries. Gino took over Upcomingdiscs Dec 1, 2008. He works out of a home theater he calls The Reel World. Favorite films: The Godfather, The Godfather Part II, The Body Snatcher (Val Lewton film with Karloff and Lugosi, not the pod people film), Unforgiven, Gladiator, The Lion King, Jaws, Son Of Frankenstein, The Good, The Bad And The Ugly, and Monsters, Inc.
The Wolf of Wall Street (Blu-ray) Machine Head