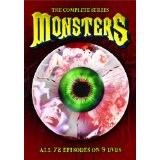 There have been many horror and sci-fi classic anthology series on television over the years. Monsters isn’t really one of them. That might sound rather harsh and unkind. The truth is Monsters was the oft-forgotten stepchild of the more popular Tales From The Darkside. That series even scored an anthology feature film with pop star Blondie. Unfortunately, both shows have been lost into obscurity over the years. They have both disappeared from even the local television stations and haven’t had much in the way of home video release. All of that is about to change with the release of Monsters The Complete Series from Entertainment One.

While Monsters might not be considered a classic, it does have a significant cult following, and there was more than a little charm to the series. It was like a weekly dose of low-budget schlock, usually staring the biggest names from the B and C celebrity lists. While Tales was more of a horror theme, Monsters featured creatures, of course. Most of these were bad rubber masks or papier mache things that were more monstrous than monsters. There were even a few early computer-generated creatures like a rather well-done giant spider. Many of the creatures of the week were normal people with some slight quirk. Seinfeld and King Of Queens star Jerry Stiller plays an amusing werewolf. Law & Order’s Chris Noth plays a hip devil who wants a down-on-her-luck housewife/frustrated writer to pen his memoirs. Creepshow’s Fritz Weaver plays an innkeeper with a rather deadly jar of pickles. Curt Lowens plays Death at a retirement home. No makeup or effects required. This episode, like many, revealed the “normal” humans to be the real evil creatures; as Hill Street Blues Veteran George Wallace plays an old fart who is willing to give up other residents’ lives to extend his own miserable existence.

Truth be told, most of the episodes were little morality plays with many recurring themes. If a deal looks too good to be true, it’ll likely get you dead…or worse. Hooking up with attractive strangers is a surefire way to buy the farm. Don’t open/touch strange objects or artifacts. Avoid strangers at all costs…even if they aren’t attractive females. The trouble is that HBO was showing a higher budget and more adult-appealing version of the same lessons with Tales Of The Crypt at the same time. The competition was too high and the budgets were too low, and Monsters ran out of gas in about a year or so. The episodes continued for three seasons.

Even with its limitations, there were some memorable episodes.

The Feverman was the show’s first episode and one of its best. David McCallum stars as a man who fights the creatures that cause fevers in people. When he’s challenged by a “learned” doctor, it is the doctor that has something to learn. The creature is merely a gross fat suit, but it’s a pretty strong episode from a story and performance point of view.

The Legacy is a wonderful tribute to the great Lon Chaney, Sr. A man buys a house because he believes a famous silent-age horror actor lived there. When he finds the legend’s old makeup case, he uncovers more than the secrets he was looking for.

La Strega stars Linda Blair in a rather nice performance as a shopkeeper who could be a witch. When a man comes to kill her for revenge, she strikes a bargain with him that allows for one of the show’s more clever plots and twists.

The Gift is another episode with a great story even if the production is limited. A boy is kidnapped by Abe Vigoda and kept in a basement with a werewolf-like creature that has a remarkable story to tell and an even more remarkable gift to pass along.

A Bond Of Silk is the episode with the computer-generated spider. Not great by today’s standards, but it’s rather good for 1989. A honeymoon couple get what they pay for when they take a cheap honeymoon suite.

The shows saved money by limiting the cast to usually a handful of characters, often less. The scenes play out in no more than two sets, and a careful eye will notice many reused props and dressings. There wasn’t any pretense here, and no one was ever pretending to be doing more than they were actually doing. The show had its moments, but it was hard to rise above the disadvantages of money, syndication airings and increasingly higher quality competition for the same viewers. The series eventually suffered the fate of its countless hapless victims and disappeared completely until now.

Gino Sassani is a member of the Southeastern Film Critic's Association (SEFCA). He is a film and television critic based in Tampa, Florida. He's also the Senior Editor here at Upcomingdiscs. Gino started reviewing films in the early 1990's as a segment of his local television show Focus. He's an award-winning recording artist for Omega Records. Gino is currently working on his 8th album Merchants & Mercenaries. Gino took over Upcomingdiscs Dec 1, 2008. He works out of a home theater he calls The Reel World. Favorite films: The Godfather, The Godfather Part II, The Body Snatcher (Val Lewton film with Karloff and Lugosi, not the pod people film), Unforgiven, Gladiator, The Lion King, Jaws, Son Of Frankenstein, The Good, The Bad And The Ugly, and Monsters, Inc.
The Grand Budapest Hotel Key & Peele: Seasons One & Two (Blu-ray)