Posted in: Disc Reviews by Brent Lorentson on March 30th, 2014 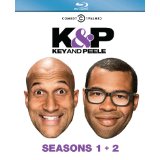 It’s been quite some time since The Chappelle Show went off the air, and it would appear Comedy Central has finally found its replacement.  I wouldn’t go so far as to say the two shows are on the same par, but what Keegan Michael Key and Jordan Peele bring to the small screen is something that has piqued my interest and shows some potential.  Both Key and Peele got their big break from working on the sketch comedy show MADtv, and it would seem they are taking their talents and what they learned to bring us something that is a little familiar but still fresh and keeps its audience laughing.

Comedy Central now releases Key & Peele as a Season 1 & 2 pack, and here you get more laughs for your buck.

To be fair, though, the only endorsement the pair will ever take notice of is that of President Obama, who has actually seen their show and has publicly given it his approval.  Not many sketch comedians can put that in their resume.

The biracial pair takes chances with their show, which is a hybrid of live bits in front of an audience and filmed sketches.  Whether they are poking fun at slave trades, being hunted by the Nazis or gangsters pooping their pants, Key and Peele manage to keep it entertaining.

Season 1 consists of eight episodes each running a little over 20 minutes.  As is expected there are some high and low points, but for the most part as the season progresses the sketches become funnier and more polished.  The character of Luther, Obama’s anger translator, is easily their standout character.  If the guys did an episode with nothing but Obama and Luther, I’m sure fans wouldn’t complain.  My favorite bit, though, was a fake commercial about an app you can use to find out if you fit the criteria to use a certain offensive word.  It’s short and simple, but this is just one of the many moments that showed me these guys are worth following.

Season 2 gets stretched out to ten episodes, and the best thing about it is it seems Key and Peele hit their stride.  With Season Two taking part during the elections, the two utilize their Luther character more in response to the debates with Romney as well as on into the election victory.  They do take a nice shot at Obama and his pot-smoking days in college which was refreshing, but still their best sketches seemed to come from more surprising places, my favorite hands down being the two having to survive the zombie apocalypse, but as luck would have it all the zombies are racists.  And continuing with the horror theme, they had a nice bit that had a “Human Centipede” reunion.  It’s these outside-the-box kind of sketches that allow them to stand out from other sketch comedy shows.

Continuing with their jabs at pop culture, we also get them playing Chris Brown and Rihanna in a music video that I found pretty funny.  But for the most random sketch I applaud them using Ice T’s head on a dog and how he interacts after being adopted.  The foul-mouthed pooch is something I hope they bring back in the following season.

Over all as the show continues to go on I feel everything about the show has improved, and if the pace continues Season 3 will be something to look forward to.

Key & Peele is presented in its original 1.78:1 aspect ratio.  The 1080p image is arrived at with an AVC MPEG-4 codec at an average of 28 MBPS.  For a sketch comedy show this doesn’t look bad, but great wouldn’t be a word I’d ever use to describe this.  When they are up on stage in front of the audience the image is sharp and clear where we get a lot of detail.  But as this gets into sketches, it seems the darker it gets the flatter the image gets.  Not much shadow definition, and there are some banding issues, but nothing major.  The image serves for what they are trying to accomplish and nothing more.

The Dolby TrueHD 5.1 track is nice here, if not a little more than needed.  For the moments where they are live with the audience, we are given clear audio.  The audience applause and cheers are there, but it never gets distracting. During the sketches we get a few moments where we might catch some ambient noise. Everything is relatively minimal but serves the Blu-Ray release nicely.

Only Season One comes with commentaries.

Audio Commentaries:  There are four commentaries on the disc, and each of them is filled with extra bits of information about where they filmed certain sketches to the actors and extras we see throughout the episodes.  They have a good rapport as you would expect the duo to have, and there is never a dull moment.

Outtakes: (6:57) a collection of moments as Key and Peele flub their lines and break character.  It’s amusing but could have been a little shorter.

Poolside Interview: (4:34) A staged interview where Comedy Central used to help promote the film to help give audiences a little taste of what to expect from them.

More from Luther, Obama’s Anger Translator: A collection of clips that unfortunately there is no play-all button for.  The highlight of the bonus section is my personal favorite involving Obama receiving a call from Michelle and Luther “helping” Obama out.

Live at the South Beach Comedy Festival: (4:08) Two segments. Backstage gives us a glimpse of the duo to how they prepare for their act moments before going on stage. Split Their Pants is a interview the pair do with Jeff Ross discussing a moment in their performance when the two simultaneously had their pants rip on stage during a bit.

More From Luther, Obama’s Anger Translator:  We get four more segments with Luther, but my favorite is easily the segment that was filmed if Obama had lost the election.  Luther rage is something that doesn’t get old.

Vandaveon And Mike: Critiquer’s Corner:  This is a segment they have for each of the ten episodes where we see Key and Peele in the characters of two online critics who host their own show and discuss the episode that just aired.  These are a little hit-or-miss but still are worth a watch.

When I first caught Key and Peele last year I had fun with Season 1, but I really wasn’t too optimistic about how the show would grow.  Having seen Season 2 now, I can’t help but say I’m impressed by these guys, and I find myself looking forward to what they will come up with next.

Brent Lorentson is a horror writer and film critic based out of Tampa, Florida. With a BA in Digital Film, he co-wrote and co-directed Scavenger Hunt. His short stories have appeared in various horror anthologies. In 2019 his short script Fertile Blood will be a part of the anthology horror film Slumber Party. He is currently working on his first novel A Dark and Secret Place set to be released in late 2019. Favorite Films: Taxi Driver, Fight Club, I Saw the Devil, The Wild Bunch, Dawn of the Dead, A Clockwork Orange, Pulp Fiction, Heathers, The Monster Squad, and High Fidelity.
Monsters: Complete Series Delivery Man (Blu-ray)