Posted in: No Huddle by Brent Lorentson on April 8th, 2014 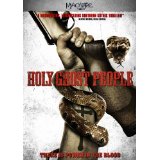 On the heels of the reality TV Pentecostal preacher dying from a snakebite, Holy Ghost People delves into the dark side of religion and how those who believe can be corrupted and taken advantage of.  It’s not that the film is looking to exploit or demonize a religion or anyone’s beliefs, but instead it explores the people who have no problem using another’s beliefs and weaknesses to manipulate them.  Though the film takes place deep in the backwoods of the Appalachian mountains, it could just as easily be about a chapel just up the street; after all, faith and corruption are everywhere so long as there is someone eager to believe. Charlotte (Emma Greenwell) does what she can to make ends meet while working at a small town bar.  She’s been saving up all her money with the intention of finding her sister who has joined a community that calls itself the Church of One Accord.  With no way to get to the community she asks for help from a stranger, Wayne (Brendan M\cCarthy) whose wallet she finds after he gets beaten up outside her bar.  He offers to drive her up to a place called Sugar Mountain where the community is said to be.

The film wastes no time in getting us to the community and into the middle of one of the services.  The congregation sings along and cheers on Brother Billy (Joe Egender) as he reaches into a box with the word SATAN written on it, and from inside he removes a giant rattlesnake.  Brother Billy continues to tell the congregation it’s the power of the Holy Spirit that protects him. Charlotte and Wayne can see through the act, but for how long?

As Charlotte attempts to learn more about the community and find her sister, Wayne finds himself stuck at the community posing as Charlotte’s father.  Members of the congregation welcome them with open arms, but viewers should be savvy enough to know something is wrong with this group.

When it comes to the performances in the film, Egender, though he may have a small frame, his energy during the sermons is intense. But it is how he embodies the role of the preacher is more of a predatory nature.  He’s cautious and deliberate with these new outsiders; he knows they don’t belong and something is amiss, but his confidence in knowing he can bring Charlotte and Wayne into the church is what makes him so dangerous.

While watching this film I couldn’t help but at times be reminded of Winter’s Bone, though the films only resemble one another by the lead female looking for a relative in a hidden away community, the resemblance fades there.  In Winter’s Bone the community had so much to hide; here instead we have a community that seems to welcome outsiders and allow things to at least appear out in the open.

When a character seems to fall under the spell of the community, the film lost me for a moment.  Sure, I can understand people falling under the spell of Brother Billy, but for either of these two characters it just seemed too easy that they could be swayed into considering even joining.  It works as a plot device to further the story and I understand why the writers made this decision, but I feel even wasting time on either of them joining the group gets away from the point of them getting to the community in the first place.  The missing sister is a device to get the pair to the community, but as they go about investigating, well, it seems to be nothing more than an afterthought.

Once the film comes to its conclusion, there are choices made by characters that leave me scratching my head wondering why would they make the decisions that they do?  Are the people in the community bad or simply brainwashed, or are their decisions sound in reason?  Sure, as we watch the film and the final act plays out our characters are going through the motions, but I just want to stop the film and ask not just the leads but the people in the community why it is that they are doing anything in this film.  Sure, these people believe in the bible, but what their motivation is to be where they are and make themselves outcasts from society is beyond me.

We meet characters who seem to have these great stories for what would bring them to the community, but this is never explored.  There are moments where this film teases us of something more grand and mysterious or sinister, but in the end nothing comes to fruition.  For a film that wants us to see its characters confront their demons, by the time there’s anything of substance it’s as though it were all for nothing.

Brent Lorentson is a horror writer and film critic based out of Tampa, Florida. With a BA in Digital Film, he co-wrote and co-directed Scavenger Hunt. His short stories have appeared in various horror anthologies. In 2019 his short script Fertile Blood will be a part of the anthology horror film Slumber Party. He is currently working on his first novel A Dark and Secret Place set to be released in late 2019. Favorite Films: Taxi Driver, Fight Club, I Saw the Devil, The Wild Bunch, Dawn of the Dead, A Clockwork Orange, Pulp Fiction, Heathers, The Monster Squad, and High Fidelity.
Hazmat The Hobbit: The Desolation of Smaug (Blu-ray)