Posted in: The Reel World by Brent Lorentson on April 12th, 2014 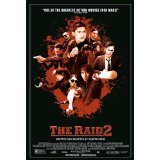 When I first experienced The Raid it was a film that simply put my jaw to the floor in awe of the action spectacle.  The Raid was everything I could have wanted in an action film, fun gun play and intense bare-knuckle martial arts brutality just about from start to finish.  This is the kind of film that after you see it you simply have to tell your friends about it and simply gush over simply how awesome and cool this movie is.  So when I first heard about a sequel in the works, already I was excited.  And when the first trailer dropped for the sequel, it teased us with visuals that promised not just an escalation of action but a film that was on a much larger scale.  And just what has director delivered us?  A film that not only exceeds in scope, but this time he brings us a story about family, honor, and revenge.  It’s a tale so cleverly told and through the eyes of a director who seems to challenge himself from one film to the next, where if you were to compare Gareth Evens to Sergio Leone, The Raid would be his Fistful of Dollars and The Raid 2 could stand right up there with The Good The Bad and The Ugly.

The Raid 2 opens up just hours following the events that occurred in the first film.  Rama (Iko Uwais) wants to take down his Captain but instead finds himself caught up in an undercover investigation that puts him in position to take down more dirty cops, only to get Rama where he needs to be he is given a new identity and is thrust into the prison world where he needs to forge a connection with Uco, the son of a crime boss.  Making matters worse, Rama discovers his brother has been killed, but there is no time for revenge since the man responsible for killing his brother also happens to be connected to Uco.  This thirst for revenge is what drives Rama.  His time behind bars isn’t easy as we see him singlehandedly taken on a horde of prisoners kicking and pounding on his bathroom stall.  But in these films I don’t really see him as a simple man; he’s a force of nature who takes on all comers and leaves them broken and bloody.

What you first have to realize when watching this film is that it is a departure from the first, but in a positive way.  In the first film, with the exception of Rama everyone was pretty much a character written into the story to just be another victim.  This time around we are given good guys with a dirty past and villains who simply want respect from their fathers and by any means necessary.  This is what has me viewing Rama as a character we can relate to from Leone’s Man with No Name trilogy, because Rama is nothing more than a hired hand who weaves between the lines of right and wrong in the name of possible justice, but more so a drive for revenge.

The prison portion of the film offers up a beautifully choreographed fight scene that breaks out between the prisoners and only escalates as the guards try to interfere.  It’s brutal, bloody and intense, and there is still so much movie left it’s amazing that a battle upon this scale is still only an appetizer of what is to come.

When the story jumps ahead two years and Rama is finally released, it is Uco who picks him up and has arranged to get Rama a job within the crime family for protecting him behind bars.  The job for Rama is simply to be Uco’s right-hand man as they collect debts for his father, the first “job” being at a pornographer’s hideaway. Well, let’s just say Uco doesn’t appreciate men who hold out on paying what they should, and when things turn sour, it’s Rama who kicks, punches, and breaks his way through all the henchmen.

But Uco is sick of being nothing more than a debt collector, and he wants more; he wants power and respect, and when he accepts that his father won’t give it to him, he turns to Bejo for what his options can be.  Bejo is a villain who belongs in a Bond film; he’s clever and ruthless and so bloody dangerous.  But what is most fun about Bejo are his two key henchman, one who carries around a baseball bat and ball and then the charming Hammer Girl.  These two at face value appear so harmless, but when it’s time to work, they are deadly and just are so much fun to watch when doing their dirty work.

As the film gets into the double-crosses and family betrayals as everything builds towards a war between the two families, it’s Rama who stands alone with no side but his own where his only concern is for the safety of his family.

When you watch this film and the thought crosses your mind about how I can think this film is a superior film in action compared to most blockbusters.  Just keep in mind this film was made for less than 10 million.  This isn’t a film driven by CGI; these are stuntmen throwing their bodies and lives through these amazing epic sequences.  The car chase that plays out in the latter half of the film, keep in mind these are real people doing these fights, hanging out of cars and jumping out of cars.  This is martial arts and stunt work at its finest.  This is a movie that makes the Expendable films look like kids films.

When all is said and done I look at this film and I simply want to watch it again and again.  As I mentioned before about my affection for Baseball Bat Boy and Hammer Girl, there are so many characters to enjoy and have fun with.  Prakoso, the family friend to Uco’s father, is insanely ruthless with his machete, but how the film allows us the moment to see his human side with his ex-wife down to his epic battle at a bar.  Simply amazing.  Or how about the moments between father and son of the Japanese gang that is going to war with Uco’s father?  There are so many layers to this film to be taken in and enjoyed; one sitting is not nearly enough.

This is a film that needs to be seen and devoured by those who love not just action films but cinema as well.  Between the amazing choreography and the beautiful camera work throughout, this is a film of such scope and magnitude I can’t help but feel this is The Godfather of action films. With word of a third Raid on the horizon, I believe Gareth Evans is the only director out there that I can imagine outdoing this film.

Brent Lorentson is a horror writer and film critic based out of Tampa, Florida. With a BA in Digital Film, he co-wrote and co-directed Scavenger Hunt. His short stories have appeared in various horror anthologies. In 2019 his short script Fertile Blood will be a part of the anthology horror film Slumber Party. He is currently working on his first novel A Dark and Secret Place set to be released in late 2019. Favorite Films: Taxi Driver, Fight Club, I Saw the Devil, The Wild Bunch, Dawn of the Dead, A Clockwork Orange, Pulp Fiction, Heathers, The Monster Squad, and High Fidelity.
Draft Day Oculus