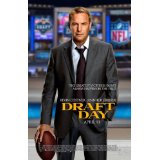 “There’s no such thing as a sure thing.”

That’s the mantra used by the people tasked with evaluating “can’t-miss” college prospects each year. But there’s no surer thing in sports right now than this: if the NFL puts something on TV, people are going to watch it. Regular season games on Thursday night? Sign us up! College prospects running and jumping? Tune in to the NFL Scouting Combine! Even the friggin’ Pro Bowl gets massive ratings, which proves the product doesn’t necessarily have to be worth watching to draw eyeballs. And that brings us to Draft Day.

The biggest off-season attraction of all is probably the NFL Draft. The influx of exciting, young talent each year offers hope for every team, and the league’s most downtrodden franchises get to take center stage. This year’s draft will take place May 8-10, which is about two weeks later than its usual late-April perch. So it’s probably no coincidence that the NFL-approved Draft Day arrives just in time to fill the football-shaped hole in our lives.

Sonny Weaver, Jr. (Kevin Costner, in his sports movie zone) is the embattled general manager of the Cleveland Browns. (Although when you’re the Browns GM, the word “embattled” really should be part of your official job title.) A countdown clock tells us there’s less than 13 hours until the draft. The crown jewel of the fictional Draft is Bo Callahan (Josh Pence), a can’t-miss/franchise quarterback prospect. Since the Draft Day version of the Browns are apparently as chronically inept as their real-life counterparts, team owner Harvey Molina (Frank Langella, too cool to remove his sunglasses) wants his team to make a splash. He pressures Sonny to acquire the #1 pick so the team can draft Callahan.

Sonny secures the #1 pick after agreeing to a ridiculously lopsided and damaging trade, much to the chagrin of Browns head coach Vince Penn (Denis Leary) and incumbent QB Brian Drew (Tom Welling). If Draft Day followed any sort of recognizable real-life logic, Sonny would simply pick Callahan after giving up a king’s ransom to get in a position to grab him. The problem is Sonny’s trade to acquire the #1 pick happens less than 30 minutes into the movie. That means the story has to pad more than an hour’s worth of screen time with contrived drama. (Even the Redskins weren’t stupid enough to consider drafting anyone other than RGIII after pulling off their similarly catastrophic trade.)

As a result, Sonny sets out to find the fatal flaw in Callahan’s game, while debating whether he should instead use the #1 pick on brash linebacker Vontae Mack (42’s Chadwick Boseman, bringing a much-needed jolt to the film in his handful of scenes) or Ray Jennings (Houston Texans star Arian Foster), a running back with a checkered background. Thankfully, the movie stopped well short of having Sonny consider using the pick on a punter.

Draft Day is largely a wasted opportunity. A movie set during the high-pressure first day of the NFL draft had the potential to be a fast, insightful, Moneyball-style peek behind the curtain. Then again, the NFL is widely considered to be the most image-conscious of all the major sports leagues. So instead of an incisive, potentially-riveting look at the draft process, we get a relatively harmless and agreeable dramedy directed by Ivan Reitman (Ghostbusters, Dave).

How agreeable is Draft Day? When NFL Commissioner Roger Goodell (playing himself) strides onto the Radio City Music Hall stage at the start of the draft, he’s greeted with…warm cheers. Anyone who’s ever watched the real draft knows the commissioner is *always* greeted by boisterous boos from the rowdy New York crowd. (Pause to imagine Commissioner Goodell agreeing to let the filmmakers use the NFL’s logos and likenesses in exchange for a favorable reception in the movie’s fake draft.)

That bit of science fiction is just one of many false notes in the tone-deaf script by Rajiv Joseph and Scott Rothman. Some wonky plot points can be chalked up to bad luck. (In Draft Day, the Seattle Seahawks own the #1 pick, which is given to the team with the worst record in the league; the Seahawks just won the Super Bowl in real life. Whoops!) Other story points will only nag hardcore football fans. (As if Cleveland — or any team — would consider using a top 10 pick on a running back in the pass-happy NFL of 2014; the highest-regarded running back this year isn’t even projected to go in the first round.) The strongest whiff of authenticity in this movie comes from the participation of real-life analysts like ESPN’s Jon Gruden and the NFL Network’s Deion Sanders, who do a convincing job of breaking down fictional characters.

Despite (or maybe because of) all the false notes, the movie is consistently amusing. I enjoyed bits centered on the mercilessness of sports talk radio, and an unruly mob of fans parking itself outside a GM’s office. Draft Day also acquires a nice charge during any scene set in the Browns war room and after the draft finally kicks off. I do wish the film had settled on a firmer tone instead of ping-ponging between nimble, wheelin’-and-dealin’ rhythms and undercooked relationship/family drama. As if having the hopes of the city of Cleveland on his shoulders weren’t enough, Sonny also has to deal with dead daddy issues, his pushy mom (Ellen Burstyn) and his sorta girlfriend/colleague Ali (Jennifer Garner).

I also wish Reitman’s most visible contribution to the film wasn’t the distracting gimmick that has characters needlessly wandering from one side of the screen to the other during split-screen phone conversations. In essence, the director is basically conceding that what we’re seeing/listening to is not interesting enough on its own.

At least Reitman’s status allowed him to attract a solid cast. This isn’t exactly Costner’s most dynamic performance, but the actor convincingly commands the room as Sonny. He’s certainly more believable when Sonny is negotiating than when he’s sharing the screen with Garner. I don’t blame either actor; the Sonny/Ali relationship comes off as a transparent attempt to engage female audiences. It doesn’t help that the Costner/Garner connection feels less romantic and more “uncle/niece.”

Garner also has the thankless job of spouting gridiron terminology every few scenes to remind us that women are into football too. (The filmmakers were apparently worried that Ali’s job managing the salary cap for a professional football team wasn’t enough to convince the audience that the character knows her stuff.) Then again, I thought Leary was a strong, inspired choice to play the cranky Penn. The actor/comic’s rat-a-tat delivery goes perfectly with the aforementioned football-speak. I also enjoyed W. Earl Brown (as an investigator who hands out information at frustratingly deliberate intervals) and Sam Elliott (as Callahan’s crusty college coach), but they each only get one or two scenes apiece.

In the end, the biggest problem with Draft Day is that any fan who knows enough about football to get excited about the film will likely be appalled by a lot of what happens in it. The movie is presumably an appetizer for NFL-starved fans. But I actually think the less you know about the draft and the sport, the more likely you are to enjoy this movie. It has been clearly constructed as a rousing, mass-appeal dramedy first, and a compelling sports movie second. Who knows? That might ultimately turn out to be the smart way to go in terms of making money at the box office. But as far as I’m concerned, while Draft Day may not be a total bust, it’s certainly not worth your first-round pick weekend dollars.