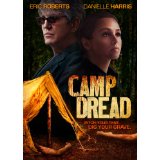 The summer camp horror genre seems to have been on the back burner for a while in my opinion.  Sleepaway Camp, Friday the 13th, and The Burning are some of the classics I used to watch over and over when I was younger.  Camp Dread looks to revisit this old-school sub-genre and reboot it with a new twist; this time it’s using a backdrop of a reality show to get these unsuspecting campers together.  It’s not the most original approach to the genre, but what is most surprising is that Camp Dread actually holds up with the previous films and franchises I mentioned and could easily be seen as an unofficial sequel to any of them.

Julian Barrett (Eric Roberts) is looking to make a comeback.  It’s been years since he’s directed his hit summer camp horror trilogy, but now that the right investors have come along he plans to reboot the once successful franchise as well as his career, only this time he plans the film to work in a reality TV format.  To factor in another twist in the film, instead of using actors or people just looking to be famous, he instead casts a group of young adults who believe they are on their way to a camp for rehab in order to avoid jail time or being locked away in mental facility.  Is the plan exploitive? Of course, but Barrett promises that the cast member who plays by the rules and is the last survivor standing is the winner of a million dollars.

To help look after the participants and help give them much needed counseling is Rachel Steele (Felissa Rose) a former actor from Barrett’s horror trilogy who is now a licensed therapist. Though Steele seems to protest Barrett casting people who genuinely need help, she doesn’t walk away from the chance to be in front of the camera again.  Whether it’s greed or the lust for reclaimed fame, everyone at the camp has something to gain, and because of this when campers do begin to get killed, just about everyone becomes a suspect.

Roberts seems to be enjoying himself here as a mastermind of sorts in front of all his monitors watching his new film play out; unfortunately, these are all things we’ve seen before.  But I can forgive this retread, because it manages to capture the spirit from the 80’s.  The characters play with the stereotypes of the genre, but instead of just being characters waiting to be the next victim some take charge, accepting they have to do what it takes to win the million dollars.  There is a moment when a character makes this decision and they make it clear they have no problem with taking lives to win.  My issue with this is what triggered for them to actually start taking lives?  Were they part of it all along, or is this simply an act?

Well, the closer you look at the film, the more holes you’ll find.  But the same can be said with any horror film; after all, with monster icons like Jason and Freddy who have managed to survive numerous deaths on screen, it’s what frees the horror genre from having to follow the rules of logic.  After all, isn’t all we want from a slasher slick new kills with somewhat of a story that at some point will lead to brief nudity?  Camp Dread delivers in this department as well.

Where the film does fail is in its reveal of the killer (don’t worry, no spoilers, kids).  It’s a simple conclusion that you see coming very early on in the film.  But what hurts the film even more, even with the reveal I felt cheated that we didn’t get the payoff.  When you are paying homage to such summer camp horror classics, the one thing you remember from all these films is the ending.  I appreciate them avoiding stereotypes, but yet the film comes to a conclusion that is just too easy.  Where is the struggle?  Where is the pain?  If anything this may be one of the most passive-aggressive conclusions to a horror film in some time.

Brent Lorentson is a horror writer and film critic based out of Tampa, Florida. With a BA in Digital Film, he co-wrote and co-directed Scavenger Hunt. His short stories have appeared in various horror anthologies. In 2019 his short script Fertile Blood will be a part of the anthology horror film Slumber Party. He is currently working on his first novel A Dark and Secret Place set to be released in late 2019. Favorite Films: Taxi Driver, Fight Club, I Saw the Devil, The Wild Bunch, Dawn of the Dead, A Clockwork Orange, Pulp Fiction, Heathers, The Monster Squad, and High Fidelity.
Here’s Lucy: The Complete Series Anger Management: Volume Three (Blu-ray)