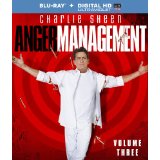 “You show up late reeking of booze, handcuffed to a stripper, and you expect me to trust your judgment?”

Even though we’re more than three years removed from his tiger blood heyday, it’s still impossible to separate Charlie Sheen’s bad off-screen behavior from the sitcom work he (somehow) cranks out every week. The latest example comes courtesy of Anger Management: Volume Three, which includes the departure of co-star Selma Blair after she reportedly complained that Sheen was a “menace” to work with. Not surprisingly, this batch of episodes also sees the “fictional” version of Charlie embrace his dark side.

I wasn’t a very big fan of the show’s first season, but that 10-episode run earned ratings that were good enough to activate a unique 90-episode renewal from FX. (Hurray, syndication money!) I didn’t keep up with the show when it returned to the cable channel, so there was a 22-episode blind spot between the first season and Volume Three for me to navigate. The good news is internet synopses have made a review site writer’s job a lot easier. The better news is Anger Management ain’t exactly Lost; the show I sat down to watch remained virtually unchanged from the one I reviewed more than a year ago. That’s great news for a reviewer playing catch-up, but it’s dismal news for fans of dynamic, interesting television.

There’s even more familiar (and familial) support for Charlie. Martin Sheen recurs as Charlie’s dad (wait for it), “Martin”, while Spin City co-star Michael Boatman pops by as a free-loading buddy named (wait for it) “Michael.” I guess when you’re contracted to crank out 90 new episodes in two years, there’s not much time devoted to coming up with inventive character names (or punchlines…or storylines).

Unfortunately, that lack of inventiveness is symptomatic of the show as a whole. The fact that Anger Management feels so creaky and lazy is especially galling given that FX is responsible for some of the most imaginative programming on television. Despite all the stripper/prostitute jokes, I still can’t believe how oddly tame and traditional Anger Management is considering that it’s loosely based on the life of Charlie Sheen and that it airs on the same network that’s responsible for American Horror Story. It’s almost as if everyone involved with this show agreed that the degree of risk they were willing to take began and ended with hiring Sheen and counting on him to make it to 100 episodes.

So we get the expected steady stream of busty women parading into Charlie’s life for a variety of increasingly unlikely reasons. (At least Charlie Sheen is a famous, wealthy TV star in real life; Anger Management would have us believe women also find increasingly haggard-looking, middle-aged men with rage issues like Charlie Goodson irresistible.)

All of Charlie’s conquests notwithstanding, the show’s greatest and most fascinating asset is Sheen himself. He remains a confident, compelling presence on-screen. On the other hand, the actor’s limited, deadpan comedic chops were put to better use when Charlie was at least trying to be a good therapist and wrangle his wacky patients. Volume Three contains 24 episodes — including two that originally aired on Fox last summer — and it just so happens that Blair’s Kate departs at the halfway mark, leaving Charlie to be reborn as a bad boy in episode 13 of this collection, “Charlie Gets the Party Started.”

That kicks off an uninspired run of episodes where Sheen basically reverts back to his more openly-sleazy Two and a Half Men persona. (Sheen’s voice is so worn at this point, he sounds exactly like Beetlejuice.) So, if you’re scoring at home, Sheen fled a hit network show where he played an irresponsible bachelor who lived in a big house and hooked up with hot women, so he could star in a basic cable show with a shrinking audience where he plays an irresponsible bachelor who lives in a big house and hooks up with hot women. I suppose the biggest difference now is that when he shows up late to work, one of his co-stars gets fired instead of him.

All that being said, I found myself laughing at parts of Anger Management. The actors who play Charlie’s therapy group have developed a nice, fractured-family chemistry. I still think DeWulf has the potential to become a star , and I like the unapologetic glee that Corbin brings to his racist/sexist/homophobic/anti-Semitic insults. (Martin Sheen winds up sharing more screen time with Corbin than with his son.) Blair’s Kate is eventually replaced by Laura Bell Bundy as Jordan — a grating basket case of a therapist who starts working with Charlie — but I prefer Smith’s well-meaning airhead ex to both of them. Brian Austin Green also became a series regular after Blair’s departure; he brings an easier sleazy charm, but the character still feels a bit redundant.

Redundant is also a good way to describe Anger Management since Sheen is hitting a lot of familiar comedic beats. There are punchlines involving “Hare Christians” and a “Sesame Streetwalker.” The jokes are corny, but you’ll probably catch yourself laughing at more than a few of them. It’s inevitable, even for a show that goes for quantity over quality.

Anger Management: Volume Three is presented in its original aspect ratio of 1.78:1. The 1080p image is arrived at with an AVC MPEG-4 codec at an average of 22 mbps. At fist glance, the show looks like your typical multi-camera sitcom. That means there are no close-ups or wide shots to show off texture or detail. On the other hand, colors popped much more than I expected them to, namely the orange jumpsuits during the scenes with Charlie’s prison therapy group. In the end, this is a bright and basic presentation that is surprisingly pleasing to the eye. (Except perhaps for Sheen’s increasingly-worn appearance, which — for better or worse — is reproduced accurately in HD.)

The DTS-HD Master Audio 5.1 track is as unambitious as the show itself. Dialogue (and crude punchlines) come through clear as a bell. Almost all of the action on this track — including the canned laughter — is confined to the front speakers. The rear speakers only burst to life for the quick musical interstitials, while the subs basically sit this one out.

Gag Reel: (5:13) Your basic collection of flubbed lines and bleeped-out curses. If nothing else, watching the actors crack each other up serves as proof that these people have at least a little bit of fun making this show. (Until they cross Sheen.) Presented in HD.

I don’t think Anger Management is an aggressively-terrible show; I just think it’s really lame. A show centered around Charlie Sheen could and should be a lot things, but “lame” isn’t one of them.

Either way, the sitcom continues its march toward syndication, with a new batch of episodes currently airing on FX. If you’re curious about what Charlie Sheen has been up to since his warlock days, you’ll be able to  jump right in. I just can’t recommend you do that, especially since there are so many more interesting, less mediocre options out there.