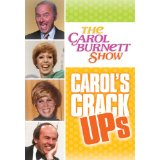 Star Vista and Time Life have put together another six-disc collection of hits from The Carol Burnett Show. It’s called Carol’s Crack-Ups, and it’s another funny selection of episodes from the long-running variety show. While it seems a little like they’re rationing these shows out in small sets, it’s almost impossible to do it otherwise. After 11 seasons there are just hundreds of shows out there. With these sets, fans can look forward to seeing them again much like they did during the years the show ran.

It’s hard to believe that CBS didn’t want The Carol Burnett Show. Not only didn’t they want it, but they fought hard to keep it from ever happening. It was the result of a five-year contract the actress had with the network. She had been a popular member of The Gary Moore Show, and they wanted to hold on to her services. So they made her an offer she just couldn’t refuse. They gave her a not-so-standard five-year contract that gave her the right to activate a special clause at any time in the five years. The clause gave her the right to produce her own variety show, and the network would be obligated to air at least 31 episodes of the show. Carol activated the clause with just one week remaining to do so.

In the 1990’s there was an attempt to bring the show back. But the day of the variety show had come and gone. None of her original cast members were a part of the revival except in a guest capacity. It lasted less than a year. It would seem that you just couldn’t go back, until now.

With Carol’s Crack-Ups, we get 17 uncut episodes and a large number of extras that include plenty of interview material with the cast and several rare classic sketches. One of the best is a wonderful feature on Tim Conway. In fact, Tim appears to be the focus of this set. He’s featured in most of the bonus materials, including an interview. Even his castmates couldn’t keep a straight face when Tim was working his comedy gold. Look at these features and you’ll understand exactly why.

The video quality is the best that can be expected from a taped variety show from the 1960’s and 1970’s. This wasn’t the age of high-definition television. The biggest problem with the set is that it will leave you wanting more. But then again, “that’s show biz”.

Gino Sassani is a member of the Southeastern Film Critic's Association (SEFCA). He is a film and television critic based in Tampa, Florida. He's also the Senior Editor here at Upcomingdiscs. Gino started reviewing films in the early 1990's as a segment of his local television show Focus. He's an award-winning recording artist for Omega Records. Gino is currently working on his 8th album Merchants & Mercenaries. Gino took over Upcomingdiscs Dec 1, 2008. He works out of a home theater he calls The Reel World. Favorite films: The Godfather, The Godfather Part II, The Body Snatcher (Val Lewton film with Karloff and Lugosi, not the pod people film), Unforgiven, Gladiator, The Lion King, Jaws, Son Of Frankenstein, The Good, The Bad And The Ugly, and Monsters, Inc.
Anger Management: Volume Three (Blu-ray) Hill Street Blues: Belker Takes A Bite (or two) Out Of Crime