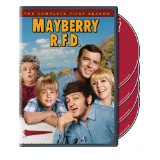 Who doesn’t have a soft spot in their heart, if not their DVD collection, for the denizens of Mayberry? They’ve been with many of us our entire lives. For most of America, The Andy Griffith Show has become the template for any small rural town. The characters stand as prerequisite citizens in any said town. The town drunk, the local barber, the motherly little old lady, and the corner mechanic all look like Otis, Floyd, Aunt Bee, and Goober to most of us now. Griffith himself brought fine qualities to his role of Sheriff Andy Taylor, but this isn’t the Mayberry we’re talking about. The show ran from 1960 until 1968 when it was still one of the highest rated shows in television history. With almost 250 episodes in the can, it was finally enough for the show’s star Andy Griffith. He was ready to turn in his keys and badge and look for something new and interesting to do. CBS, however, was not ready to leave the town of Mayberry. So without its original titular star, Mayberry RFD entered the television landscape in 1968.

Griffith still had a warm feeling for the show and his co-stars, so he agreed to do the first episode of the new series. He was also still the official sheriff and would appear from time to time. The show’s new format had already been introduced with the series finale of The Andy Griffith Show. The pilot would be his long-awaited wedding to long-time girl Helen. Even Don Knotts, who had left the series earlier, returned to wish the happy couple well and get Mayberry RFD off to a swinging start. The pilot would also introduce Andy’s replacement. Star and head of the Mayberry City Council would be Ken Berry, who would later gain attention as naive Vint on Mama’s Family. He played Sam Jones, who also had a young son named Mike. There was an obvious attempt to copy the father-and-son atmosphere between Andy and Opie. The show’s opening would have them playing ball in the front yard enjoying father and son time as the original pair did fishing.

Most of the residents of Mayberry would also stick around. Aunt Bee, played by the lovable Frances Bavier, would become Sam’s housekeeper. She had to adjust to living on a farm. That meant getting her eggs from under a hen instead of a fridge. It wasn’t an easy transition, but she finally made a comfortable home there for two seasons. Goober, played by George Lindsey, was still running the gas station and even took over as sheriff while Andy was on his honeymoon. Of course, Andy didn’t tell him where the gun was. Jack Dodson remained as Howard Sprague, and Paul Hartman continued on as repairman Emmitt Clark. Millie was Sam’s lady and was played by Arlene Golonka. She also ran the local bakery. Andy Griffith would appear in five episodes total during the show’s three-year run.

The stories were very much the same. The main character continued to be Mayberry, where you didn’t have to lock your doors. In fact one of the best episodes of the series happens in this first year that helps accent just how different Mayberry really was. Help On The Farm had Sam hiring two ex-cons at Andy’s behest. The cons find it remarkable just how trusting the town is. There’s the can at Goober’s where you put the money after helping yourself to gas. Gives new meaning to the term self-serve. When you see Mayberry through the eyes of Fingers and Lucky, it truly hits home how quaint the town always was.

Even without Andy Griffith the show finished in the top five its first two years. The third was still in the top 20. Still, CBS had decided it was gaining too much of a reputation as the “hillbilly” network, and the show was cancelled, as were a couple other rural comedies.

Gino Sassani is a member of the Southeastern Film Critic's Association (SEFCA). He is a film and television critic based in Tampa, Florida. He's also the Senior Editor here at Upcomingdiscs. Gino started reviewing films in the early 1990's as a segment of his local television show Focus. He's an award-winning recording artist for Omega Records. Gino is currently working on his 8th album Merchants & Mercenaries. Gino took over Upcomingdiscs Dec 1, 2008. He works out of a home theater he calls The Reel World. Favorite films: The Godfather, The Godfather Part II, The Body Snatcher (Val Lewton film with Karloff and Lugosi, not the pod people film), Unforgiven, Gladiator, The Lion King, Jaws, Son Of Frankenstein, The Good, The Bad And The Ugly, and Monsters, Inc.
Mobius (Blu-ray) Transcendence