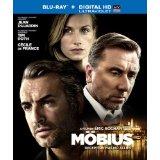 For a lot of moviegoers, the word “spy” evokes tuxedos, gadgets, and exotic accents. Möbius — a French/Russian production from French filmmaker Eric Rochant — only employs the last of those tropes while falling in line with more low-key espionage adventures like Three Days of the Condor and Tinker Tailor Soldier Spy. So I shouldn’t have been surprised that this film gets up to some subterfuge of its own; Möbius is a love story posing as a spy thriller.

Alice (Cecile de France) is a gifted trader working for a bank in Monaco. Her employer is shady Russian oligarch Ivan Rostovsky (Tim Roth). Rostovsky is the target of a money laundering sting led by dogged Russian FSB operative Gregory Lioubov (Oscar winner Jean Dujardin), whose team recruits Alice. She has a sick father in America — we know her dad is American because he’s wearing a Yankees cap the first time we see him — but Alice can’t take care of him because she’s been banished from North America due to some vague involvement with the Lehman Bros. fiasco. Lioubov instructs his team to use Alice’s father as leverage.

As the story unfolds, it quickly becomes clear that Lioubov’s team isn’t the only one targeting Alice. Things get even more complicated when Lioubov becomes directly involved in the operation. Posing as a writer named Moise, he gets dangerously close to Alice and puts both their lives in danger. What I just described has all the makings of a satisfying spy thriller. But the fact that this film is named after a geometric oddity is no accident.

“The Möbius strip. It has no front or back, and it only has one side.”

Rochant — who wrote and directed Möbius — opens his film with a quick scene of Alice spouting a bunch of financial jargon at work, but he otherwise drops us in the middle of Lioubov’s operation targeting Alice and Rostovsky. As a result, early sequences — like the one where Lioubov uses play-acting to train an underling (Emilie Dequenne) on how she should approach Alice — are very disorienting at first because we have no idea who these people are or what they’re talking about. However, this is a case where form follows function; the idea of the story starting at a relatively arbitrary period in time connects nicely with twisty, interconnected tableau Rochant chose for this film.

I just wish the story Rochant was telling in Möbius had been even half as interesting as the way he decided to tell it. For example, I dare you to stay awake during any scene where Alice talks about financial markets. And though the agitated CIA agents played by the likes of Wendell Pierce (The Wire, totally squandered here) and John Scurti (Rescue Me) end up factoring into the final act, their scenes never feel essential or connected to the main story.  I did enjoy the thread that had Lioubov constantly berating his team for being incompetent, but it didn’t really have a payoff.

As I indicated before, the main focus ends up being the strong connection between Alice and Moise Lioubov. Their romance even gives the spy story a great jolt when Lioubov’s team tries to figure out the identity of Alice’s new, secret lover. (It’s their boss!) Dujardin (assured and economical in his movements) and de France (sophisticated and confident) are terrific together. I liked not knowing whether Lioubov was telling Alice the truth about his past, and I enjoyed the way she visibly brightened whenever she was around him. The elegant cinematography by Pierre Novion and the scorching chemistry between the two leads both go a long way toward elevating (and selling) their immediate, intense bond. Too bad the whole thing is nearly sabotaged by a ludicrous, final-act plot turn that threatens to erase everything Alice and Lioubov had.

Möbius simply isn’t as good as the sum of its impressive parts. Roth, for example, only gets to suggest menace rather than portray it. (Rostovsky has a scary head of security — played well by Aleksey Gorbunov — with a scary mole to do his dirty work.) It’s almost as if Rochant relied so much on our knowledge of Roth’s previous, chilling work that he forgot to make this particular character interesting.

This is Rochant’s gloss on Alfred Hitchcock’s Notorious and Les Patriotes, the director’s own spy film from 1994. With Möbius, Rochant created a world that felt both stylish and grounded. I liked being immersed in it even if I didn’t necessarily understand or care about what was going on.

Möbius is presented in its original aspect ratio of 2.40:1. The 1080p image is arrived at with an AVC MPEG-4 codec at an average of 37 mbpbs. You typically think of spies — and spy stories — living in the shadows, but Rochant and this Blu-ray from Lionsgate offer an image that is surprisingly sunny. And it’s not just the picturesque Monaco setting (seen in panaromic shots); the scenes with Alice at the bank are bright and vibrant. (Perhaps unnaturally so, due to low contrast.) Skin tones are warm and toasty throughout, and close-ups reveal an extraordinary amount of detail on the actors’ faces and bodies. (Especially during a love scene between Dujardin and de France.) I do wish the black levels had been inkier and deeper once the action moves into the shadows, but at least there’s decent separation during these darkened sequences. Even the image’s periodic softness (in some medium shots) gives the romantic scenes between Alice and Lioubov a pleasing, subtly-dreamlike quality.

The DTS-HD Master Audio 5.1 track juggles French, Russian, and English dialogue exceedingly well. It also allows Jonathan Morali’s lush score to envelop the listener without leaving them feeling overwhelmed. The subs are only a factor during a scene set at a nightclub, but the rest of the surround speakers offer understated and effective ambient noises whenever the action shifts outdoors. This is a fantastically well-balanced and dynamic track that is able to wow without blowing the viewer off his or her couch.

The Making of Möbius Featurettes: A trio of mini-docs presented without a Play All option. “A Great Couple of Cinema” (4:18) reveals the effort Rochant put into making Alice and Lioubov seem like a glamorous, iconic screen couple. “An International Cast” (3:59) has the director talking about how working with French actors differs from giving Anglo performers instructions. (Roth, for one, had his own vision for the character.) The Möbius Ribbon (1:53) quickly explores how the geometric shape relates to the film’s themes.

Extended Interviews with writer/director Eric Rochant, and actors Tim Roth, Jean Dujardin, and Cecile de France: Not surprisingly, Rochant (18:54) gets the most amount of time to talk. The writer/director reveals that he set out to make “a love story in an espionage context” and (randomly) that he tweeted throughout the film’s production. Roth (5:51) says he was attracted to the project by the film’s cast, while Dujardin (12:42) was intrigued by the taut script. He also speaks a little of the Russian he picked up for the role. De France (3:51) gets the least face time, which is odd considering that she’s basically the lead. The actress talks about getting finance lessons from Rochant in preparation for the role. There is no Play All option. All of the interviews, except for the one with Roth, are in French with English subtitles.

Möbius is a nice throwback to a kind of spy story that doesn’t make it into American multiplexes very often. (Dujardin and de France have serious heat together.) It’s also a classic case of style over substance. Give this one a look if you’re in the mood for a thrilling romance rather than a pulse-pounding spy caper.

Contest: Enter To Win About A Zombie From Revolver Entertainment Mayberry R.F.D.: Season 1