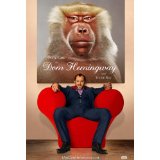 I have to be honest. Director Richard Shepard probably lost me in the first 10 seconds of Dom Hemingway. I can’t help believing that my opinion was shaded a bit as I watched Jude Law as the titular character rambling some nonsensical dialog while having himself “taken care of” by a fellow inmate in prison. It’s an image that lives with you long after the scene is done. Surprisingly, I did start to settle in for what looked like a more promising ride than I had first believed. And for about 40 minutes it actually became an almost good film.

Dom Hemingway (Law) is a safecracker who has been in prison for 12 years. He was a loyal crook who didn’t roll over on anyone else. Now that he’s out, he expects to be rewarded for his loyalty. He also hopes to make it up to his now-adult daughter Evelyn (Clarke). It doesn’t look like that’s going to be easy. In fact, none of it is going to be easy. Getting new work is hard, because safes have gone electronic since he’s been away, and an audition where he bests his privates against a job is handled with absurd cleverness that only backfires.

What might be a pretty good narrative never does come together. Dom appears to stumble toward his goals without any clear connection to reality. His ego gets him in trouble even when he might have been OK. What follows is a sequence of unrelated vignettes that serve as one hell of a sweet character study but fall very short of a story or context within which this character can truly operate. Chalk it up to “fish out of water”, but that’s not really the direction Shepard is trying to go with this no matter how much Jude Law attempts to pull him and what passes for a story in that direction.

By the midway point it all falls apart. Every time that Shepard manages to grab our attention, he squanders the opportunity to move the film forward with one of these detours down a side road. Most of the time he is traveling the wrong way on a one-way street. The only thing that keeps this mess together is the sheer force of will of a brilliant performance by Jude Law. He refuses to surrender the high ground and insists that he can make something out of nothing…which he very nearly does.

With the tent-pole films arriving almost every other week, Dom Hemingway is sure to get lost in the shuffle. Few films deserve it more. My only worry is that somewhere along the line someone might actually find it again. There’s only one thing I’d have to say to Shepard after watching this mess: “See, there is a part of me that wants to put you in the trunk of my sister’s Prius, drive you up to Canvey Island and bury you up to your thick f’ n neck, cover your fat f’n face in hamburger patties and let the creatures of the night eat you to death while I watch.”

Gino Sassani is a member of the Southeastern Film Critic's Association (SEFCA). He is a film and television critic based in Tampa, Florida. He's also the Senior Editor here at Upcomingdiscs. Gino started reviewing films in the early 1990's as a segment of his local television show Focus. He's an award-winning recording artist for Omega Records. Gino is currently working on his 8th album Merchants & Mercenaries. Gino took over Upcomingdiscs Dec 1, 2008. He works out of a home theater he calls The Reel World. Favorite films: The Godfather, The Godfather Part II, The Body Snatcher (Val Lewton film with Karloff and Lugosi, not the pod people film), Unforgiven, Gladiator, The Lion King, Jaws, Son Of Frankenstein, The Good, The Bad And The Ugly, and Monsters, Inc.
The Secret Life of Walter Mitty (2013) (Blu-ray) About a Zombie