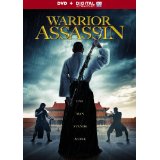 Martial arts films are just about as done to death as the slasher film.  Just about every angle and direction that you can take with these films has been explored by now.  When it comes to the martial arts genre, seeing a student or son avenge their father or master is just about the motivation in most of these films, but audiences accept this  because what we are sitting down for is the action.  Seriously, how many people remember the plots of the old Jackie Chan or Jet Li films?  But go back even further to the core classics like The 36th Chamber of Shaolin or Five Deadly Venoms; these films are all rooted in the spirit of revenge.

As for where Warrior Assassin falls, well, it is far from a classic, though it tries so hard to follow in the footsteps of the great films of the past but instead simply comes off looking like someone doing a Shaw Brother cos-play with their VHS camera.

The story is about Ju Ke Zhen (Pan Yuanjia) who witnesses his village being attacked as well as his father being slain by a man who Ju Ke believed was his father’s dearest friend.  But as it turns out this is just a case of Ju Ke walking in at the wrong time.  But fearing being killed by the son, the man makes a quick escape, only making the shroud of guilt appear worse.  Ju Ke sets off to avenge his father’s death, and along the way he encounters a woman who happens to be well trained in kung-fu.  So well, in fact, that she makes a Ju Ke look like a joke.  I’m not sure if Ju Ke’s inexperience is supposed to add humor or dramatic impact to the scenes; either way it just didn’t work for me.

Lo and behold, it’s the girl’s father who Ju Ke wishes to kill so he can avenge his father’s death, but as it turns out when Ju Ke discovers who the real killer is, it is all but too late as an army comes in to attack the old man and his village.  This attack is, well, to put it nicely, over the top.  The old man makes a valiant last stand as arrows are shot into him as he battles soldiers while Ju Ke makes a quick escape with the man’s daughter.

Now armed with the truth and the identity of his father’s real killer, Ju Ke prepares himself for battle to avenge his father.

What is so distracting from the story is the quality of the production that we get.    Between the bad wigs and the bad costumes and sets, it’s hard to really allow yourself to get absorbed in the film.  But to make matters worse, where even low-budget indie films use high quality HD cameras, the look of this film is inferior to just about every other film out there.  I feel there has to be some kind of post-production work that could have helped age the look of the film or given it a grain so it would not have such a generic look.

Even getting into the kung-fu, everything seems to resemble a dance routine rather than a pair of warriors battling to the death.  I don’t know who is to blame for this production, but if it were a student film a lot could be forgiven for the lack of experience.  When it comes to Lionsgate the product they put out (even micro-budget) is usually of a higher bar than this.  I appreciate the effort these guys showed, but the execution is a mess.

Brent Lorentson is a horror writer and film critic based out of Tampa, Florida. With a BA in Digital Film, he co-wrote and co-directed Scavenger Hunt. His short stories have appeared in various horror anthologies. In 2019 his short script Fertile Blood will be a part of the anthology horror film Slumber Party. He is currently working on his first novel A Dark and Secret Place set to be released in late 2019. Favorite Films: Taxi Driver, Fight Club, I Saw the Devil, The Wild Bunch, Dawn of the Dead, A Clockwork Orange, Pulp Fiction, Heathers, The Monster Squad, and High Fidelity.
Labor Day (Blu-ray) And The Winner Is…Hill Street Blues