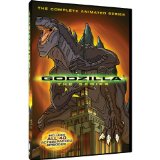 In 1998 following the release of Roland Emmerich’s version of Godzilla, the story would continue following some of the characters that we met in the film as well as a host of other characters and monsters.  With a 40-episode run coming out to about 14 hours of television, the DVD release of the series comes out at just the right time for those who need a temporary fix before seeing their favorite big green lizard splash across the big screen once again.

I love just about any story that involves giant robots or monsters fighting.  Even the ‘98 film version of Godzilla had its moments of charm.  What the series brings to viewers (though its target audience is younger than most of the adult fans) is the possibility of what Godzilla could be had the story simply continued on.  The series picks up not long after the events in New York, when Nick Tatopoulos (voiced by Ian Ziering) discovers an adolescent Godzilla that forms an attachment to Nick.  This attachment allows Nick control over the giant lizard and it also becomes Nick’s protector whenever he finds himself in trouble and in need of aid (which is at least forty times going by the episode count).

Though New York and the world are still recovering from the devastation caused by the original Godzilla, the world now has other monsters and diabolical foes to worry about.  Helping Nick and Godzilla do battle against these monsters are the members of the H.E.A.T team.  There is the genius germophobic Craven who helps with the creation of the gadgets the team uses, the French soldier who is skilled in just about every kind of combat, the savvy scientist Elise, and then there is Randy the computer genius who is a bit of a doofus sometimes.  Just why this team is thrown together and manages to function is beyond me, but the writers manage to give each of these characters enough depth and background that the viewer gets to be a little attached to these guys.

As for the episodes, let me just jump to the three part Monster Wars; these three are worth the purchase alone.  Earlier in the series in Leviathan the team travels to beneath the ocean where they encounter an alien race.  The aliens have mind control powers where they hope to control the minds of the humans and absorb their knowledge before invading and taking over the planet.  The team thinks they had the aliens beat, but in Monster Wars the aliens have concocted a new plan; this time they want to control the minds of all the monsters they can find and use them to wreak havoc around the world.    Seeing the various monsters and Godzilla being mankind’s first line of defense is just the kind of madness you hope to see; now granted we don’t get the man-in-suit battles that fans have grown to love, but the animated fights are fun and epic at times.  If that isn’t enough of a carrot, how about knowing there is Godzilla vs Cyborg Godzilla. (I’m guessing the name Mecha-Godzilla would have been a violation of sorts.)

Also in the show as characters from the ‘98 film are reporter Audrey Timmonds and her loyal camera operator Animal (Voiced by Joe Pantoliano).  Animal continues to be put in for some comedic value whereas Audrey is thrown in to add a romantic element as she and Nick continue to pursue things.

Where the show pulled me in as well is by creating villains who appear over the course of the show that actually are capable of enough menace where I dug how much of an evil “mastermind” they would be.  The best example of this is Cameron Winter; he is just bad news for the H.E.A.T team, and he wants nothing more than to capture and use Godzilla as a weapon of his own.  But to make things personal, Nick and Winters are long-time acquaintances who have a long-standing rivalry between them.

As for the animation, well, this is the old-school 2-D cel animation from the looks of it.  For me this kind of animation works more so than the pixels that come together when we see some of the more current animation.  Some of the creatures do tend to look like other monsters we’ve seen throughout the series, but I appreciate the work that’s been done here.  The artists and writers also take us across the globe, whether it’s in the jungles of South America, or the coast of Japan, to beneath the ocean, the world we are given in which to witness the team do battle against these monsters is expansive, though I do have to question just how Godzilla can travel so fast to these distant destinations where Nick and his team are.

I mentioned above about Ian Ziering lending his voice talent to the series, but if you listen carefully there are some notable stars doing some voice work here.  Michael Chiklis, Ron Perlman, Linda Blair, and Dennis Haysbert are just a few of the talented members of the voice cast that are sprinkled about.

Is this the greatest animated series to be released? I wouldn’t say that, but it’s a show that far exceeds the film it was derived from.  The adventures of the H.E.A.T. team are fun for everyone, so for those parents who are looking to slowly edge their little ones into enjoying the great Gojira, this is an excellent way to start.

Brent Lorentson is a horror writer and film critic based out of Tampa, Florida. With a BA in Digital Film, he co-wrote and co-directed Scavenger Hunt. His short stories have appeared in various horror anthologies. In 2019 his short script Fertile Blood will be a part of the anthology horror film Slumber Party. He is currently working on his first novel A Dark and Secret Place set to be released in late 2019. Favorite Films: Taxi Driver, Fight Club, I Saw the Devil, The Wild Bunch, Dawn of the Dead, A Clockwork Orange, Pulp Fiction, Heathers, The Monster Squad, and High Fidelity.
Hill Street Blues: The Dynamic Duo – Hill & Renko Devil’s Due (Blu-ray)