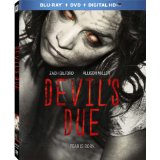 It’s easy to envision the elevator pitch for Devil’s Due. You only need five words: “Rosemary’s Baby meets Paranormal Activity.” The upside is obvious. The idea of a demonic pregnancy has terrified and unsettled expectant mothers since Ira Levin published Rosemary’s Baby in 1967 and Roman Polanski adapted it for the big screen the following year. Meanwhile, the Paranormal Activity films made low-budget/found-footage domestic horror hugely profitable. The downside? You’re probably not topping Rosemary’s Baby, and horror audiences seem to be suffering from an acute case of found-footage fatigue.

I guess I should mention Devil’s Due isn’t technically a “found-footage” movie. Instead of opening with a brief, faux-grim prologue that establishes the found-footage conceit, the movie starts with a Bible quote. (1 John 2:18, to be exact.) Devil’s Due comes courtesy of Radio Silence, the filmmaking collective comprised of directors Matt Bettinelli-Olpin, Tyler Gillet, producer Chad Villella, and producer/cinematographer Justin Martinez who previously worked on a V/H/S segment. It’s more accurate to think of the movie as a POV story.

We’re quickly introduced to Zach (Zach Gilford), a catatonic young man who is sitting in a police interrogation room and covered in blood. The action jumps back about nine months, right before Zach and Samantha (Allison Miller) get married. We follow the couple as they travel to the Dominican Republic for their honeymoon. On their last night there, they visit an underground cave club at the behest of a local cabbie (Roger Payano). They must’ve had a *really* good time because they can’t remember a thing the following morning. Shortly after returning to the U.S., Samantha discovers she is pregnant.

All of the action in Devil’s Due — the wedding , the honeymoon, and the entirety of Samantha’s increasingly frightening pregnancy — is captured by cameras operated by one of the characters, or surveillance devices. (Think Chronicle.) In other words, this is a way of making a “found-footage film” without having to adhere to the found-footage rules. This is the part where you ask, “What’s the point of using found-footage techniques on something that is not a found-footage story?” To that, I would simply say…“Great question!”

Whereas Chronicle used the found-footage form to tell an emotional superhero story in a thrillingly-fresh way, Devil’s Due invites unflattering comparisons to both of the genres it is trying to channel.

The movie comes closest to being a competent Rosemary’s Baby knockoff, thanks to a strong performance from Miller and some story beats that hint at the couple’s marital strife without spelling it out. (It’s Samantha’s office that is jettisoned in favor of the nursery, and she wasn’t exactly planning on having a baby.) Unfortunately, Miller’s relatable early work gives way to the standard-issue hysteria this sort of role demands. Gilford, on the other hand, has a hard time breaking free from the skeptical/doofus-y trappings of his “Husband” part. Luckily, the former Friday Night Lights star radiates decency, which makes him a smart choice to play a supportive spouse.

As a found-footage (or whatever you want to call it) entry, Devil’s Due brings absolutely nothing new to the (changing) table. I mean, if you’ve seen one poor sap get violently dragged by an invisible, demonic force, you’ve seen them all. I also feel like we’ve overdosed on creepy, cult-y bystanders who stare at our heroes from a distance, as well as furniture that violently jolts itself out of place. I haven’t even gotten to some of the film’s severe logic issues, like bringing a camera to the hospital to interrogate someone who suffered a stroke. There’s also no explanation as to why the camera woozily cut in and out after Zach and Samantha were drugged. (Did someone slip the camera a mickey too?)

Despite this sloppiness and the fact that the filmmakers seemingly never met a horror cliché they could resist — like foreboding palm readers, or adorable dogs who are doomed by their intuition — Devil’s Due features an impressive lead performance from Miller, a brief, hammy turn from Sam Anderson as a priest (the actor is the only one who seems to realize he’s in a bad horror movie), and a handful of decent scares. The problem is we’ve seen all of these scares — especially “night vision demon face” — many times before. The bigger problem is, instead of making their big storytelling choice seem essential, the candid camera conceit feels pointless.

Devil’s Due is presented in an aspect ratio of 1.85:1. The 1080p image is arrived at with an AVC MPEG-4 codec at an average of 32 mbps. The baseline image — the footage shot by Zach, which comprises the majority of what we see — is generally cleaner and more vibrant (particularly during the tropical honeymoon sequence) than you’ll typically find in most (intentionally) lo-fi found-footage outings. (Including the grim Chronicle.) Black levels are murkier than you’d probably get from a more straightforward visual presentation, which is a problem during tense scenes. It’s evident a lot of this material was significantly altered during post production in a variety of ways. As a result, there is some softer, higher-contrast footage on display, along with some noticeable instances of artifacting. Despite a few strikingly good shots, this Fox Blu-ray does a fine job of making it seem like the movie was shot by amateurs.

The DTS-HD Master Audio 5.1 track is a sneaky, brilliant way for the filmmakers to cut loose. The audience knows this is supposed to be a lo-fi production, and it’s much easier to convey that idea with the film’s look. I mean, shaky/blurry cam = homemade, right? Well with the film’s visuals selling the idea that this is an amateur production, the track is free to be much fuller and less-front loaded than you’d expect from a soound recording that was authentically limited. (As far as I know, Zach wasn’t carrying around a boom mike in addition to his camera.)

We get rumbling subs to punctuate the ominous quote that opens the movie. There is also some terrific, nuanced immersion from the rears during the wedding reception and the cave club scene. And beyond not being front-loaded, sound — including dialogue — travels to surround speakers when appropriate. We’re ok with movies looking a little crappy on purpose, but I feel like we’d be much more annoyed if the sound was compromised. This disc goes above and beyond by delivering an excellent mix.

Deleted Scenes: (16:35) This collection of nine scenes includes an extended look at the honeymoon, an alternate version of Zach’s visit with Father Thomas, and an extended ending that feels much longer than it is. Features a Play All option.

Radio Silence — A Hell of a Team: (12:18) A rollicking, gently profane profile of the filmmaking collective behind Devil’s Due. Actually, there’s more chop-busting than profiling here. The four friends met working various low-level entertainment jobs and decided to band together.

Ashes to Ash: (0:54) This bit of additional (found) footage features an extra look at the film’s ubiquitous demonic symbol. Could’ve served as a cool teaser.

The Lost Time: (3:30) This Spanish-language scene offers a different perspective of the cult’s creepy ritual. If this had been cut down a bit, it could’ve also served as an effective teaser.

Roommate Alien Prank Goes Bad: (2:19) This silly short from 2008 first brought prominence to some of the Radio Silence guys. The title is pretty self-explanatory.

Mountain Devil Prank Fails Horribly: (3:26) A spiritual, more ambitious sequel to the previous short. This one came out in 2010 and has a darker ending.

Audio Commentary with Matt Bettinelli-Olpin, Tyler Gillet, Chad Villella and Justin Martinez: The Radio Silence guys manage to sneak in some cool production insights in this alternately fratty and nerdy commentary. We learn Devil’s Due was filmed on location in New Orleans, the Dominican Republic and Paris(!) The guys also openly discuss the various iterations of the script and why they ultimately made changes.

Rosemary’s Baby is nearly 50 but remains as hot as ever. The movie was prominently name-checked on Mad Men last year and NBC is about to air a miniseries adaptation starring Zoe Saldana.

Then there’s Devil’s Due, which unfortunately peaked with an ingeniously disturbing promotional prank leading up to the film’s release. The Blu-ray’s bonus material doubles as a good introduction to Radio Silence, though it also made me wonder why none of the group’s playfulness was evident in the finished film. In the end, I can’t really recommend the movie to either found-footage fans or gorehounds.