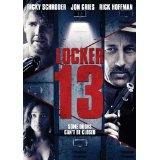 There is something I find unsettling about an amusement park after hours, when all the rides are shut down and the laughter and screaming of kids running around are gone.  These parks, for the most part, are designed to take us to another time or another world where reality is how the park engineers design it to be.  So when Skip (Jason Spisak) arrives at the Old West theme park to be the overnight janitor, I could appreciate the surreal world he would be stepping into.  As we go along with him on a tour during his first day, his guide and superior is played by Jon Gries, who seems to have a story for just about everything at the park.

The setup for the anthology is a bit hokey considering all these objects are supposed to tie into these grand little tales that the guy is telling, but it does keep the film going.  The first story is in fact also the most enjoyable of the films. It’s the story of a boxer who is down on his luck and seems to be on the verge of losing his career until a suspicious older man hands the boxer a pair of beat up old gloves.  Ricky Schroder fills in the gloves of the boxer and actually brings in the most notable performance of the film.  As he laces up his gloves and he steps into the ring, he transforms into a mean and lean fighter, and it becomes a challenge for him to hold back with opponents, one of whom he beats to death.  Unfortunately this story ends too soon, and from here on the film simply goes downhill.

Other stories include a man who is wishing to become a member of a cult, as well as the tale of a suicidal man who is confronted by another man who wishes to save him in a most unconventional manner.  The problem is none of the stories seem to have the characters or dramatic value to deliver the punch that the first story does, and as the film drags along I found myself getting frustrated with the film, just as Skip was with his guide.

The guide seems to want all these stories he is passing on to Skip to resonate and hopefully enlighten the ex-con to discover his true self.  This of course leads to the inevitable locker 13, where Skip has to confront another version of him upon opening the locker.

Sure, the film is done on a low budget, but the production value isn’t what hurts the film.  Instead it’s the matter of there not being stories that are engaging enough to get me through the film without feeling bored.

The final story tries so hard to tie everything together and give us this feel of The Twilight Zone, but it simply doesn’t work, at least not for me.  I’m not going to spoil the film or anything, but I just feel there was so much potential here, but instead we just get a bunch of stories thrown in that really don’t or shouldn’t tie together.  For a film that has a character constantly inferring to Skip the importance of “knowing thyself”, it would have been nice if the film took some of its own advice.

Brent Lorentson is a horror writer and film critic based out of Tampa, Florida. With a BA in Digital Film, he co-wrote and co-directed Scavenger Hunt. His short stories have appeared in various horror anthologies. In 2019 his short script Fertile Blood will be a part of the anthology horror film Slumber Party. He is currently working on his first novel A Dark and Secret Place set to be released in late 2019. Favorite Films: Taxi Driver, Fight Club, I Saw the Devil, The Wild Bunch, Dawn of the Dead, A Clockwork Orange, Pulp Fiction, Heathers, The Monster Squad, and High Fidelity.
Hill Street Blues: The New Norm The Amazing Spider-Man 2