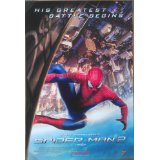 “There are dark days ahead.”

When Marc Webb took over the reigns of Spider-Man over at Sony, I had very mixed feelings. I was a pretty big fan of the comic as a kid, and the Raimi films were a pretty exciting time for me. OK, maybe not the third one. Webb came along and he put a fresh spin on the web-spinner by returning much of the story to its roots. I liked his first film, although it hasn’t aged as well for me as the Raimi films did. But you can’t get much better than Spider-Man, and I watched with diminishing anticipation as word leaked out bit by bit what Webb and Sony had in store for Peter Parker beyond The Amazing Spider-Man.

We all listened and cringed as the information came out. I cringed each time I saw a new bad guy or character added to the mix. In my mind, it’s the mistake most hero films make. We all know sequels are expected to get bigger and bigger as our anticipation grows with each new technological display and advance in special f/x. But as I’ve often stated in these very pages: expectations kill. Just as surely as they do for the audience, the same can be true for the filmmakers themselves. In an effort to “up the ante” they tend to forget why we love these characters to begin with. Marvel in particular built an empire on focusing on the human aspects of these inhuman heroes. We don’t need more bad guys. We need better stories, action that thrills as well as contributes to a good story, and we want to forget about our own lives for a couple of hours. I get the impression Webb understands this. I’m not so sure about Sony.

As The Amazing Spider-Man 2 begins, Peter Parker/Spider-Man (Garfield) and Gwen Stacy (Stone) have been flirting with an on again/off again relationship. For Gwen, it’s easy. She loves Parker and wants them to be together. For Parker it’s not so easy. First there’s the promise he made to her dying father to break up with her. He’s also just as aware of the very real dangers for anyone who comes close to him, particularly when they are aware of his dual identity. For both, it’s graduation time, and valedictorian Gwen delivers a speech loaded with foreshadowing.

Enter Max Dillon (Foxx), a rather crazy but mild-mannered employee for Oscorp. He’s designed their super power grid bridge, but, of course, in typical comic book style they’ve ripped the designs off and gave him none of the credit. Still, he’s a pretty sweet guy with a Spider-Man obsession. Image his surprise when Spider-Man himself rescues him during a police car chase with future Rhino Aleksei Sytsevich (Giamatti) who is on the ultimate road rage run. Soon he fantasizes a friendship with the hero who doesn’t even remember his name. On top of that, what he really wants is to be needed and noticed. When the standard “accident” turns him into the powerful master of electricity tagged Electro, he turns on his once loved Spider-Man, blaming him for his loss of attention.

Meanwhile Harry Osborne (DeHaan) has just lost his father to a strange illness that is now consuming him. His research tells him that the only chance he has to avoid his father’s agonizing death is some help from, you guessed it, Spider-Man. Of course, said help is refused, and now Spider-Man has two new enemies (three if you count the earlier rounded up Rhino).

The complicated plot involves flashbacks that tie in with Peter’s parents and another subplot of a coup inside of Oscorp that attempts to gain control of some pretty dangerous stuff.

You might have already hit upon one of this film’s flaws. The plots are just too complicated, and many are intended to set up future films. In fact, the last 20 minutes of this movie is nothing more than a glorified trailer for Sony’s upcoming Sinister Six movie. Other characters from the Spider-Man universe are introduced. You’ll get a little of Felicia Hardy who comic fans know as another Spidey love interest, The Black Cat.

“I know we all think we’re immortal, and we should feel that way. We’re graduating. The future is and should be bright. But like our brief four years in high school, what makes life valuable is that it doesn’t last forever.”

You see, Sony, like DC/Warner and Fox have been watching the Marvel Studios universe raking in billions of dollars with each new entry. There’s some comic-envy going on, and now everyone wants to create their own inter-connected world and capture some of that Thunder God noise. The problem is that everyone is going too fast. They forget that it took from 2008 to 2012 to build towards The Avengers. Now Sony is looking at their own corner of the Marvel universe and saying to themselves: “Let’s get bigger faster”.  Of course, Marvel built in all these little links in each film, but The Amazing Spider-Man often comes across as being focused more on setting up the future than entertaining us now.

That’s not to say this isn’t a very entertaining movie at times. Marc Webb does have one aspect of the Spider-Man phenomenon down cold. He knows that it was always really about Peter Parker and his relationships and how hard they always were to juggle with Spider-Man always in the way. Webb weaves an absolutely touching and emotional story with his characters. Peter Parker and Gwen provide some rich material and that’s in no small part to the talents of Emma Stone who continues to be the best comic film “girl Friday” to date. That relationship hurtles toward a climax fans of the comic will be expecting. More than that, Webb pays it off by paying great homage to the events of the comic. Played perfectly, the aftermath will be a factor in who Peter Parker is for a long time to come. Webb knows these relationships. This is where the movie shines brightest.

The cast is pretty solid all the way around. Jamie Foxx, while terribly underused, is quite good as Electro. What can I say about Paul Giamatti, except I want to see so much more of him. Dane DeHaan is the sleeper performance in this one. I never quite liked his look for Harry Osborn, and his performance here is a little shaky at times. Through no fault of his own, he never really seems comfortable in Harry’s skin. But when he finally becomes The Goblin, he is awesome. It’s like the actor has finally come alive, and we’re truly seeing him for the first time in the film. Again, it’s a very limited appearance, but it is a chilling one, indeed.

There are also incredible visuals to be found here. This is the best Spider-Man to date when it comes to breath-taking special f/x. From the first time we see Spidey swinging through the city the visuals are nothing short of stunning. Forget the standard huge set pieces. Never mind the required battles. These are the thrilling moments of this movie. The 3D adds such a natural element that you’ll feel as though you’re up there flying through the air with the web-crawler. I can honestly say I haven’t seen anything quite like it before.

Where Webb takes a serious flaw is the action sequences. The battles are almost throwaway scenes. They are brief and really don’t ever connect. I was hugely disappointed at just how little Jamie Foxx is actually in this movie. At his zenith he ends up little more than a loaded gun, aimed and fired by someone else. These battles and villains are also very episodic in nature. It’s almost as if one chapter completely closes and the next bad guy lines up to take his shot. I got the sense that Spidey was playing a video game where he would face the level boss and move on to the next level. Even with great f/x and amazing set pieces, the action never quite measures up. Fortunately, Webb has his emotional story going or this movie could have been an expensive disaster.

You’ll find The Amazing Spider-Man 2 a pretty entertaining ride, all things considered. The nearly two and one half hours goes by quickly enough. Still, I’ve been tainted. I’ve seen what comic book movies can truly be with The Avengers and the latest Captain America movies. They appear to be getting better with each movie. It’s an uncommon path that Sony would do well to study more carefully before they go any farther. Spider-Man is one of the most popular of the Marvel heroes, if not the most popular. It’s a huge power, and with great power comes… you know the rest.

In the end this is Peter and Gwen’s story, and it saves the day far more effectively than any superhero ever did. That’s what you’ll walk away remembering, not the action. Spider-Man’s themes sound a lot like Fanfare For The Common Man by Aaron Copland. I suspect it is not an accident. We all might look forward to Venom and The Sinister Six, but it’s hard to imagine how Sony’s going to pull it off without the heart that won’t be a part of those films. Who else could these six super bad guys face that could provide the challenge to keep it interesting? I hope they find a way to inject the emotional element Webb has here. Without it Sony’s corner of the Marvel Universe could come tumbling down. Of course, “It’s complicated”.

Gino Sassani is a member of the Southeastern Film Critic's Association (SEFCA). He is a film and television critic based in Tampa, Florida. He's also the Senior Editor here at Upcomingdiscs. Gino started reviewing films in the early 1990's as a segment of his local television show Focus. He's an award-winning recording artist for Omega Records. Gino is currently working on his 8th album Merchants & Mercenaries. Gino took over Upcomingdiscs Dec 1, 2008. He works out of a home theater he calls The Reel World. Favorite films: The Godfather, The Godfather Part II, The Body Snatcher (Val Lewton film with Karloff and Lugosi, not the pod people film), Unforgiven, Gladiator, The Lion King, Jaws, Son Of Frankenstein, The Good, The Bad And The Ugly, and Monsters, Inc.
Locker 13 Escape From Tomorrow (Blu-ray)