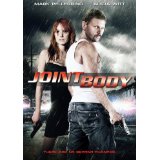 An ex-con falling back into old habits isn’t exactly an original idea. There have been countless films that have followed this formula, often covering the same basic twists and turns one would expect. Such is the case with Joint Body, an independent crime-drama from writer/director Brian Jun. The film follows recently-paroled everyman Nick Burke (Mark Pellegrino, Lost, Supernatural), who finds himself alone in a small town in southern Illinois as he attempts a fresh start at life. During his stay in prison, Burke’s wife filed for divorce, and forced him to give up his rights to see his daughter through his parole agreement. Now a free man, he lives in a hotel room while searching for a job in a changed world, crossing paths with a troubled stripper named Michelle (Alicia Witt, Justified).

Things quickly take a turn for the worst, as Danny, an obsessed former acquaintance of Michelle’s, violently assaults her, sparking a reaction from Burke that lands him in the hospital with a gunshot wound while leaving Danny dead. Burke and Michelle fall under investigation, and the two form a connection because of the events.

Brian Jun clearly meant to make his story much more character-driven than similar films, but it ultimately falls flat with an overall lack of character development. There are very few scenes that truly give insight into the history and personality of the characters, making it hard to relate to their struggle. The one major theme of the movie is a supposed bond that develops between Burke and Michelle, but there is never a defining moment that signifies their connection to each other. In fact, there is very little interaction between the two throughout the film, aside from, perhaps, that last twenty minutes.

It doesn’t help that the film often feels like it is just going through the motions. There are no real plot twists to speak of, and the few attempts made to surprise the audience are shallow and never hold any weight. This could be said about much of the movie, as there is never a sense of urgency despite the idea that Burke could be sent back to prison for, at the very least, another ten years. Neither character expresses any worry, nor is the issue really discussed, and the few scenes involving the murder investigation are only composed of a few lines of questioning followed by the empty threat of consequence for lying.

That being said, however, while Joint Body doesn’t tread any new ground, the movie is carried along by decent performances by both Pellegrino and Witt, who do the best with what they were given. It is because of them that the movie remains watchable, and at times even bordering on enjoyable, even with its several shortcomings. There seems to be real chemistry between the pair, and it’s disappointing to see that go to waste. It should be noted, as well, that from a technical standpoint, Joint Body hits all the right notes. The camera work is well done, and Jun does a well-enough job depicting a small-town atmosphere. Though the plot is poorly written, the dialog satisfies by never feeling campy or forced.

Brian Jun tried to create a compelling drama with Joint Body. However, the results are a mixed-bag, with good performances barely outweighing the many persistent issues that the film faces. If you find it on Netflix, give it a shot if you’re in the mood for something light, but otherwise, skip this one.