Posted in: The Reel World by Brent Lorentson on May 9th, 2014 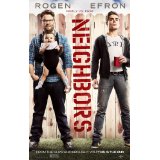 Walking out of Neighbors one thought struck me, and I haven’t been able to shake it since seeing the film.  I’m getting old.  It’s the revelation we all deal with at some point or another, and it seemed to be the overall theme of Neighbors.  Since Judd Apatow came along I think he has firmly created a new sub-genre the coming of middle-age film.  Seth Rogan seems to be the poster child of this new genre, and with his characters he is somewhat the ambassador of all man-children out there.

Mac (Seth Rogan) and Kelly (Rose Byrne) Radner are new parents who have just moved into a new home together.  It’s the start of their grown-up lives, though of course it isn’t as easy as they had hoped.  The days of going out to all night raves are over, as is their “spontaneous” sex life.  But what makes it work is their desire to at least be good parents and maintain a healthy relationship with one another.  Their quiet, boring life takes a sharp turn after the arrival of their new neighbors, a fraternity set on becoming the ultimate party and going down in frat-house lore.

Teddy (Zac Efron) is the president of this motley crew of frat brothers.  For anyone who’s seen Animal House, Van Wilder, or Old School I’m sure you will get the picture about what these guys are like.  Teddy is good-looking and charming and wants nothing more than to build a friendship with his neighbors; after all, he doesn’t want them or anyone on the block to have to call the police and break up any parties.  And it’s during the first party Teddy happily obliges Mac and Kelly to come in and have a good time.

Teddy and Mac connect in an odd way in the sense that Mac envies the youth that Teddy has ahead of him, whereas Teddy sees Mac as the inevitable finish line to life where he doesn’t want to wind up.  Rogan and Efron have a strong chemistry together as the two converse and cross urine streams as their characters seem to form this instant bond overnight.  But unfortunately Mac has to face the reality of his job, wife and child, and the sense of responsibility sinks in, though for Teddy the party never ends.

Following a call to the police the feud begins between the two houses.  The pranks are innocent at first, but things quickly escalate.

With these kinds of comedies no one is going in expecting to have a life-changing experience, so the ridiculous story line can be forgiven.  What matters here are the laughs, and it does deliver.  Though Rogan may be the only familiar comedian in the top billing, the supporting cast helps carry the laughs. Rose Byrne continues to show her comedic range and shares one of the films more amusing moments as she and Rogan partake in a “milking” scene.  Sure, for many the scene would be considered crude, but the audience we were with seemed to eat it up.

Appearances by comedian Hannibal Buress, Lisa Kudrow, Christopher Mintz-Plasse and Jason Mantzoukas help give the movie the extra comedic punch it needed.  It’s Dave Franco who really shines and gets to show off his comedic timing as well as flex a bit of his acting muscles.  It’s a role that could have simply been phoned in by any actor, but Franco managed to squeeze some personality and heart into the character.  It doesn’t hurt that his character has a pretty amusing party trick as well.

To a degree I look at this film kind of like The Burbs meets Animal House, though it never quite reaches the quality of either.  Sure, it’ll make a lot of money, but when it comes to the longevity of the film, I don’t believe it will stand the test of time.  Rogan is proving he is the comedian to beat of the past decade, and the man knows how to make his audience laugh, but I believe the guy is capable of so much more, though right now it is looking like Neighbors is the comedy to beat for the summer.

Brent Lorentson is a horror writer and film critic based out of Tampa, Florida. With a BA in Digital Film, he co-wrote and co-directed Scavenger Hunt. His short stories have appeared in various horror anthologies. In 2019 his short script Fertile Blood will be a part of the anthology horror film Slumber Party. He is currently working on his first novel A Dark and Secret Place set to be released in late 2019. Favorite Films: Taxi Driver, Fight Club, I Saw the Devil, The Wild Bunch, Dawn of the Dead, A Clockwork Orange, Pulp Fiction, Heathers, The Monster Squad, and High Fidelity.
Weekend at Bernie’s (Blu-ray) Joint Body