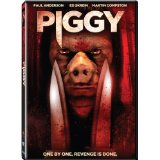 When it comes to revenge, Hollywood has exploited the theme in just about every conceivable way.   It’s a genre that has been done so much that it’s hard to find a fresh hook to bring the audiences in, much less create a story that will motivate the audience to root for this blood thirsty protagonist.  Getting the audience on your side as your hero hunts down individuals for retribution is asking a lot, but still there is always going to be an audience that will fill theater seats.

As for how Piggy fares in the lexicon of revenge films, unfortunately this was a film that seemed to be doomed from the start.  I had caught a trailer for the film, and for the most part it left me at least optimistic about the possibilities.

The film is about Joe (Martin Compston); he’s your average nice guy, but he has a knack for allowing the world to just walk all over him.  Thankfully Joe has his older brother to look out for him.  Unfortunately, though, his brother finds himself in an altercation that leaves him seriously injured, and eventually he succumbs to his wounds.  The guilt riddles Joe and leaves him helpless until Piggy (Paul Anderson) comes along.  Piggy, as it turns out, was a long-ago friend of Joe’s brother, and he wants to avenge his death.

Maybe it’s just me, but from the moment Piggy appears on screen I couldn’t help but having this nagging feeling that left me comparing the film to Fight Club.  Not that the film ever reaches that echelon of greatness (if you’ve somehow missed Fight Club remedy this now), but nevertheless I couldn’t help but draw comparisons between the films.  Piggy is a rebellious beast of a man who lives upon his own rules and away from society, and it’s only fitting that he suggests they wear pig snouts when the two go out hunting the streets to find who killed Joe’s brother.

As the two start acting out their revenge by kidnapping and torturing members of a group that Joe and his brother had the altercation with, what never seems to resonate is the desire for Joe to want revenge.  Sure, we see him sad about his brother, but we never get to see the seething hate and bottling of anger that would convince me he would ever be on board for committing these atrocities.  By the time we actually do get to see some raw emotion from Joe, it came too late.

The film’s narration is another hangup that reminds me too much of Fight Club and yet is as clever or insightful as you would hope.  Had the narration been excised from the film I don’t believe it would have made much of a difference, but at least it would not have felt so spelt out.

A saving grace in the film is the reluctant relationship between Joe and his brother’s wife Claire (Louise Dylan).  How they tease the viewer with this relationship is something that at least played well.  Sure, Joe is lonely and seems to have always envied his brother, and the notion of being with his girl is something that would at least bring him a step closer to living the kind of life Joe has always wanted.  Had more time been spent on this relationship and less on Joe and Piggy skulking around looking for people to harm, there could have been the potential for a much more engaging story.

In the end Piggy delivers more of the same. Despite its attempts to appear as a clever thriller, instead it’s simply your typical run-of-the-mill revenge film, only with a British accent.

Brent Lorentson is a horror writer and film critic based out of Tampa, Florida. With a BA in Digital Film, he co-wrote and co-directed Scavenger Hunt. His short stories have appeared in various horror anthologies. In 2019 his short script Fertile Blood will be a part of the anthology horror film Slumber Party. He is currently working on his first novel A Dark and Secret Place set to be released in late 2019. Favorite Films: Taxi Driver, Fight Club, I Saw the Devil, The Wild Bunch, Dawn of the Dead, A Clockwork Orange, Pulp Fiction, Heathers, The Monster Squad, and High Fidelity.
Sophia Grace & Rosie’s Royal Adventure (Blu-ray) Perry Mason Movie Collection Volume 2