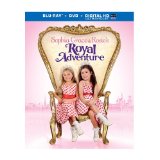 “If we act like we belong, they’ll think we belong.”

You never know who could be watching when you post something online. Sophia Grace Brownlee is a perfect example of how to become a “star” in this decade. In 2011, the 8-year-old Brit starred in a video of herself singing Nicki Minaj’s “Super Bass” alongside her silent, hype man cousin Rosie McClelland. The clip went viral and caught the eye of Ellen DeGeneres, who has repeatedly featured the diminutive duo on her daytime talk show over the last few years. I suppose it was only a matter of time before Sophia Grace and Rosie jumped to the big screen; well, the straight-to-DVD screen anyway.

Fair warning: if you’re allergic to the color pink, you might want to skip this film altogether. Sophia Grace and Rosie — still rocking their signature tiaras and pink tutus — star as themselves in this loud, goofy, dumb caper that the little girl in your life will nevertheless devour.

Sophia Grace & Rosie’s Royal Adventure kicks off with the girls performing a song on The Ellen DeGeneres Show. In real life, Sophia Grace and Rosie have covered red carpet events for Ellen as correspondents. In the movie, the girls are dispatched to Switzelvania (not a typo) to cover the coronation of a new queen with help from harried segment producer Phyllis Bundt (a game Amy Louise Wilson). The fact that DeGeneres herself couldn’t be bothered to pop up for a quick cameo didn’t make me feel too confident about the rest of the movie.

Once they arrive in Switzelvania, the girls are separated from Phyllis thanks to some good old-fashioned mistaken identity. Phyllis’ identity is stolen, and she suffers one ridiculous indignity after another. Meanwhile, Sophia Grace and Rosie are mistaken for a pair of grand nieces in the royal family, so they get to meet the three princesses vying for the crown. There’s vain oldest sister Imogen (Anna Skellern), loopy middle sister Cordelia (Emma Pierson), and shy, kind-hearted Abigail (Margaret Clunie), who would rather dress up as her favorite masked hero than put on a ball gown. (Although if I were in this movie, I’d probably insist on wearing a mask too.) Abigail is the most un-princess-like of the bunch, which obviously makes her the best choice. Sophia Grace and Rosie decide to help Abigail realize her destiny, much to the chagrin of her scheming older sisters.

You can guess what happens in the end. (Though I bet you probably didn’t guess that a magical, wish-granting duck gets thrown into the mix too.) Sophia Grace & Rosie’s Royal Adventure is very much in the mold of the straight-to-video flicks the Olsen twins made in 1990s. No one confused those movies with cinematic masterpieces, but they directly targeted a lucrative, under-served demographic: pre-teen girls. Despite the phenomenal success of a movie like Frozen, that demo continues to be largely neglected outside of Disney princess adventures. (Especially when you’re talking about live-action offerings.)

Naturally, I’m not suggesting that little girls should only be interested things that come in a glittery pink package; I actually have a 6-year-old niece who loves Batman and the Power Rangers as much as she loves Cinderella. I just think making a direct play for that particular segment of the audience is a savvy play. Of course, just because this flick is aimed squarely at little girls doesn’t mean it should neglect the rest of its audience. Unfortunately, I feel like anyone over the age of 10 will have a hard time making it all the way through Sophia Grace & Rosie’s Royal Adventure without cringing. (Or at least without stopping the film one or two times to gather themselves.)

Sophia Grace and Rosie are not trained actresses, so some painful line readings are to be expected. (They are fond of punctuating their accomplishments by exclaiming, “Easy peasy, lemon squeezy!” It’s as annoying as it sounds.) On the other hand, the girls have an easy chemistry with each other. At times, Sophia Grace confuses “yelling” with “acting”, but Rosie — who is mostly silent in their videos — proves to be a daffy little comedienne. For better and worse, their intrepid, indomitable energy simultaneously wears you down and wears you out.

The film features five (wildly over-produced) original songs, along with a thoroughly unnecessary, strangely-hypnotic performance of MC Hammer’s “U Can’t Touch This.” Not surprisingly, they are up-tempo ear piercers that sound like ripoffs of stuff that’s already on the radio. (Particularly the Macklemore-lite “Put Your Hands Up” and the Minaj-esque “Celebration.”) The exception is “A Princess Inside”, the film’s self-described “ballad moment.” Otherwise, the songs are like the movie itself: the shrillness almost entirely drowns out the bits of wit on display.

Besides the aforementioned “ballad moment”, a character makes a reference to the girls “montaging” during their “Queen for a Day” training session with Abigail. Out of the rest of the cast, Skellern’s harmlessly nasty Imogen makes for a nice, haughty villain. On the other hand, everything with Wilson’s hard luck Phyllis Bundt — who comically assumes an even more ridiculous name during her misadventures — could’ve been cut out of the film, since it doesn’t even end up connecting with Sophia Grace and Rosie’s story.

Sophia Grace & Rosie’s Royal Adventure clocks in at an already-slim 75 minutes, but excising Phyllis’ pointless plot line would’ve shaved an additional 15 minutes. Speaking of “15 minutes”, I can’t totally blame Sophia Grace and Rosie for milking theirs because you never know what the future holds.

Sophie Grace & Rosie’s Royal Adventure is presented in an aspect ratio of 1.78:1. The 1080p image is arrived at with an AVC MPEG-4 codec at an average of 18 mpbs. The film opens with a full-screen flash of pink and the primary color assault rarely lets up from there. This Blu-ray from Warner Bros. offers a bright, clean, suitably sharp image that consistently pops, even if it doesn’t quite dazzle. There aren’t too many close-ups, so we don’t get too many opportunities to marvel at fine detail, but flesh tones are nice and warm. Overall, a strong, contemporary (and pink!) presentation.

The DTS-HD Master Audio 5.1 track (curiously and erroneously listed as a 5.0 track in the Blu-ray case) is occasionally as aggressively loud as the movie itself. (At least during the musical interludes.) The subs actually get a pretty nice workout during the film’s more uptempo numbers, and during a brief plane crash scare on the flight to Switzelvania. Unfortunately, this track is not very immersive at all; the rears are used to amplify Eugene Mishustin’s generically playful score rather than provide dynamic ambient noises. Dialogue comes through clearly and is confined to the front. Overall, this is a strong (if unambitious) track.

Pink! Pink! Pink! The Story of Pink: (3:30) No, this is not a Behind the Music episode devoted to the pop/rock singer. Instead, this featurette offers trivia about the girls’ favorite color and teaches you how to say the word “pink” in several different languages.

Favorite Moments from The Ellen DeGeneres Show: (4:05) Clips from the Ellen show include Sophia Grace and Rosie meeting Nicki Minaj, Rihanna, and Russell Brand, as well as trying out their American accent.

Bloopers: (4:16) The usual collection of flubbed lines, with special emphasis here on a rotating bookcase and Pierson’s goofy, extended dance as Cordelia.

With its consistent blasts of pink and princess plot line, Sophia Grace & Rosie’s Royal Adventure is likely to entertain young girls. If you need to keep your young’uns distracted for a little over an hour, pop this one in and make sure you find a quiet space to do your work.