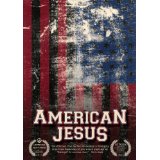 American Jesus is an intelligent film. It does not judge. It is balanced in its approach to some basic questions. It shows many sides to a very large and ill-defined subject. It attempts to understand in a comprehensive way Christianity in America. Right from the beginning it uncovers unique splinter churches that are part of why America approaches religion differently than other countries. It visits the Cowboy Church in Amarillo, Vintage Faith for surfers in Santa Cruz, Bikers for Christ in Middletown , N.Y., and Team Impact for body builders in Crosby, Texas. This leads into Mara Einstein talking about her book Brands of Faith: Marketing Religion in a Modern Age. It is about the competitive nature of religion in America. There is no state religion, so it has always allowed people to follow there own inner callings.

This film tries to show a very broad cross section of the wide variety that has resulted. The most successful are the mega-churches which can have over 10,000 people at a service. Something like that only becomes successful if they create enormous excitement with rock bands and video screens and TV. On the other extreme, you have small grassroots churches that have members dancing with torches burning their skin and snakes biting them. One such church is in Matoaka, West Virginia, the Full Gospel Apostolic House of the Lord Jesus, run by Pastor Mack Wolford. Wolford is interviewed and explains it is in the hands of the Lord what happens. A caption reveals that Wolford died in 2012 from a snakebite at age 44.

One of the more interesting interviewees is Frank Schaeffer who wrote the book And God Said, Billy!.

He was the son and right-hand man of a major figure in the pro-life movement, Francis A. Schaeffer. He ran a hippie commune but became a driving force after Roe vs. Wade. But Frank came to believe that the group he was leading would persecute him if they know his true feelings. Another major figure, Pastor Phil Aguilar of Set Free Ministries, was an ex-con and a former drug dealer. His ministry was suppressed when it became too popular and, more importantly, too popular with the worst kinds of sinners.

Part of what American Jesus shows is the resiliency of the American people and their ability to think for themselves. Most of these groups are the opposite of what would be called organized religion. These groups all go in different directions, and many question the Bible in many ways. Others say you can bypass religion altogether and go straight to God. These groups are fighting hypocrisy and exclusionary dogma. Many of these groups find their main focus is to help the homeless and the disadvantaged. It’s all about those who are the least obvious followers of God. It is not about conforming but rebelling in a way, because that is what your heart tells you.

I don’t know what the agenda of the filmmakers is here. The sense I get is that they approve of the endless variety that this country produces while condemning those who oppress or persecute others. Many of the small splinter churches are obviously rebelling against the big money and somewhat hypocritical churches. I found the result inspirational.