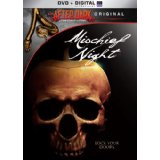 “You just never know who’s gonna be at the door.”

A virginal babysitter with bad cell phone reception is terrorized by a masked killer in Mischief Night. You don’t have to be a gorehound to know this is basically the plot of every slasher movie ever made. So it’s natural for viewers to expect some sort of swerve to differentiate this horror flick from all those that came before it. With the flawed, micro-budgeted Mischief Night, that swerve comes courtesy of the film’s intriguing assertion that a “boogeyman” can come from anywhere.

The film opens with a subtly captivating image: it’s an out-of-focus shot of a man parking on the side of the street and digging into the trunk of his car. At first he’s wearing what any adult male might wear to an office job: slacks and a long-sleeved dress shirt. We never get a look at his face, but we watch The Man (Marc Valera) change into an all-black outfit and slip on a creepy white mask.

No one in the neighborhood really blinks an eye because it happens to be the Halloween Eve, aka “Mischief Night.” We meet Kaylie (Brooke Anne Smith), a teenage babysitter who relishes outsmarting the neighborhood pranksters. Kaylie is actually filling in for her friend Daphne (Nikki Limo), and she gets a visit from self-proclaimed neighborhood watchman Mr. Smiles (Malcolm McDowell), who warns her to never open the door. This being a horror movie, you won’t be surprised to learn his warning goes unheeded, which becomes a problem for everybody when The Man comes around.

From the beginning, Mischief Night displays a desire to subvert the “virginal babysitter” and “boogeyman” archetypes. Kaylie is more profane than you’d expect and sneakily hostile toward the well-to-do couple she’s babysitting for. We also get a hint of a past trauma in her life. When The Man arrives, the two engage in a game of cat-and-mouse, though it becomes increasingly unclear which one of them is the “cat.”

Writer/director Travis Baker explores some pretty interesting ideas while working within the well-established framework of horror movies. (There’s a version of the classic horror trope where the killer is knocked out, and the would-be victim foolishly leans in to get a closer look or try to grab the weapon.) It’s not every slasher flick that carves out the time to depict an emotional connection between its two main characters, or show us an incompetent killer who can’t tie a strong enough knot.

This is Baker’s directorial debut, and I’m curious to see what he can do with more resources and experience. As it stands, Mischief Night is more impressive for its ideas than it is for its execution(s). The schlocky-looking deaths don’t quite match the relatively high-minded script, and that arresting opening image of The Man putting on his killing costume turns out to be the visual highlight of the film. The final act is also guilty of over-explaining the killer’s actions, rather than letting them speak for themselves.

Smith commands the screen quite handily as Kaylie. On the other hand, that same sense of authority doesn’t make her a very convincing teenager, and it can sometimes feel like the actress is overdoing it. Valera complements her performance by underplaying his character. The Man’s psychopathy is scarily ordinary and the character is ultimately as blank of a slate as his mask, which befits a “Man” with no name. McDowell appears exactly twice, and he doesn’t leave a single piece of scenery un-chewed. If it wasn’t clear the actor was given total freedom to improvise — Mr. Smiles alternates between warning Kaylie and hitting on her — then the outtakes of his scenes during the end credits confirm it. His work is an amusing bit of camp that bookends the film.

It’s no accident the film is set during Mischief Night rather than Halloween. Early on, one character complains the latter holiday has become too commercial. The implication is that everything that was initially great about “Halloween” now feels exhausted. It’s a solid premise, but Mischief Night isn’t likely to satisfy bloodthirsty horror fans, nor is it well-crafted enough to work as the character drama it actually is.