Secrets of the Third Reich 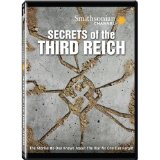 Just when you think you’d heard about everything there was to hear about World War II, the Smithsonian Channel offers some insight into a few “lesser-known” events of the war. Mix in a little conspiracy theory that’s become all the rage since Dan Brown’s novels hit the best seller list. What you end up with is a DVD like Secrets Of The Third Reich. The release cobbles together four episodes each telling a unique story that may or may not be completely true. With the use of reenactments, historical footage and interviews with survivors and their kin, the episodes attempt to explain some of these stories in a somewhat new light. The results are decidedly mixed, and no conclusive answers are really provided.

You get the following episodes:

He was known as The Desert Fox. He was one of Hitler’s closest generals, and it appears he might have also betrayed his Fuhrer and the Nazi Party. We’re talking about one of Hitler’s right-hand man: Erwin Rommel. After an “accident” he was given a hero sendoff attended by Hitler himself. According to this episode, perhaps he wasn’t nearly as loyal as the Reich proclaimed. The theory here, apparently supported by his surviving son, is that Rommel was part of the plot that planted a bomb next to Hitler. It was a famous assassination attempt that Hitler escaped adding to his own god-like legend. It appears Allied wiretaps catch him telling other officers that Hitler must be killed. The theory here is that it wouldn’t look good for the war if the truth got out. Therefore, Rommel was granted the kind of deal Frankie Pentangeli was offered in The Godfather Part II. If he killed himself, his family would be spared, and he would remain the loyal Nazi in the eyes of the public. It seems Rommel was dead just hours after he was visited with the proposal.

I’m a bit of a history buff, and I’ve only heard vague rumors to this theory over the years. The evidence on this one is actually pretty compelling, and the history books might have to find a kindler, gentler place for Rommel.

This is the most oddball of the episodes. Even the narration admits there’s not necessarily a lot to it. The idea here is that Hitler’s private physician Theodore Morell was dosing Hitler with all kinds of crazy drug combinations. The proposal is that some or even much of Hitler’s mania might have been caused by the drugs he was taking. There’s certainly evidence that Morell’s treatments were criticized by other doctors and people close to Hitler. The episode might have been called High Hitler. There are a lot of health issues associated with Hitler here as well, from manic depression to Parkinson’s disease. There’s interesting stuff here, but I’m not sure it convinced me that there was anything more at work with Adolph Hitler than pure evil. I should caution that nowhere in the episode are they trying to excuse or mitigate Hitler’s own culpability in the actions he took. That’s not where this is going. It’s merely an interesting conjecture.

This has less of the conspiracy tone until the very end. The episode explores the exploits of one of Germany’s most decorated submarine commanders and the last sub he commanded. Much of the episode is actually quite interesting. It gives plenty of detail about what life was like on a World War II German sub.

The episode also follows the Smithsonian-sponsored attempt to find the wreck of the sub off the coast of Brazil. Naturally their cameras are present when the wreck is actually discovered, and we’re treated to those first images of the sunken submarine since it went down.

The conspiracy part of the episode deals with a signal the sub sent as it was being hunted by Allied aircraft. The speculation has to do with how intentional the signal was in respect to the sub’s sinking.

This is a catch-all episode that details four special ops missions from both sides of the war. There’s some general information about just what special ops were/are and interviews with men who have been a part of that life in more recent years.

The first case takes us to the time of Italy changing sides in the war. Dictator Benito Mussolini was on the run and captured by Italian troops. He was being held prisoner at an abandoned Hotel. Hitler, loyal to his partner, sent in a special ops team to rescue Mussolini. The team was successful but captured him without firing a shot. That didn’t stop the Nazi propaganda machine from telling tales of a daring rescue and heroic struggle. Of course, Benito got his in the end, and it wasn’t pretty.

The second case details the actions of an assassination squad sent in to kill the architect of the holocaust Reinhard Heydrich. Two men ambushed his car and got right next to him. Unfortunately, they were sent with crappy guns that all jammed and a grenade that did very little actual damage. Fortunately, the grenade infected Heydrich’s body with horsehair from the car’s upholstery, and he died of an infection. There’s speculation that the assassins actually used a biological weapon that caused the infection, but there appears to be no evidence that that was true.

The third story tells of British agents that snuck into German-occupied Crete and kidnapped the general. With the help of the population they actually got him off the island and in Allied hands. Later they reunited in the 1970’s for a television show, and apparently the kidnapped general became friends with one of his captors.

The last story talks of the legendary Werewolf Squad that attempted to foment a rebellion once the Allies began to take German towns. They only had one success that of killing a mayor who cooperated with the Allies to keep the peace in a small town.

These are all interesting stories, to be sure. There’s some dramatization to add some spice to the historical stuff. The best material is the vintage footage and photographic material. There are no bonus materials, and with four hours on a DVD, we’re not talking stellar video quality. The price is right, and for junkies of war or Nazi materials, there’s some fun new stuff here to be found. Of course, you could have got it from the Smithsonian Channel itself. Check out a time “when everyone was Reichmaster of this or Reichmaster of that”.

Gino Sassani is a member of the Southeastern Film Critic's Association (SEFCA). He is a film and television critic based in Tampa, Florida. He's also the Senior Editor here at Upcomingdiscs. Gino started reviewing films in the early 1990's as a segment of his local television show Focus. He's an award-winning recording artist for Omega Records. Gino is currently working on his 8th album Merchants & Mercenaries. Gino took over Upcomingdiscs Dec 1, 2008. He works out of a home theater he calls The Reel World. Favorite films: The Godfather, The Godfather Part II, The Body Snatcher (Val Lewton film with Karloff and Lugosi, not the pod people film), Unforgiven, Gladiator, The Lion King, Jaws, Son Of Frankenstein, The Good, The Bad And The Ugly, and Monsters, Inc.
McLintock! – Authentic Collector’s Edition (Blu-ray) The Color of Lies (Blu-ray)