Posted in: Disc Reviews by Archive Authors on May 27th, 2014 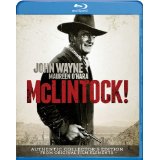 G.W. McLintock (John Wayne, True Grit, Rooster Cogburn) made most of his money by being a cattle baron. He made so much money, in fact, that the film’s fictional town was named after him. How cool is that? But all is not milk and honey in McLintock’s life. He has an estranged wife who does not live with him (Quiet Man co star Maureen O’Hara), and now wants a divorce.

Those hostilities are put aside when their daughter Becky (Stefanie Powers, Hart to Hart) returns home… from a trip east. Because of the McLintocks’ reputation, the entire town comes to welcome Becky back. To Wayne’s objection, one man in the town (Luther Van Dyke, Coach) starts to court Becky, although she appears to have a wandering eye for one of the farmhands on Wayne’s ranch, played by one of Wayne’s sons, Michael.

One of the first things you’ll notice about McLintock! is that it’s not in the normal vein of Wayne westerns. Wayne is very much aware of his status in the genre at this point, and this film serves as a way to poke fun at that status. It’s a Western slapstick, and includes such recognizable names as Strother Martin (Cool Hand Luke), Yvonne DeCarlo (The Munsters) and Bruce Cabot (King Kong). With Paramount, Wayne’s former production company Batjac has released several other Wayne classics, and McLintock! is the latest to come to Blu-ray.

McLintock! is presented in its original aspect ratio of 2.35:1. The 1080p image is arrived at with an AVC MPEG-4 codec at an average of nearly 40 mbps. This high-definition image presentation is quite a nice surprise. It looks great for a 40-year-old film. McCormick’s very green dress looks vivid without any type of bleeding, and the Western landscapes look great. It’s not absolutely pristine or reference quality, but again, considering the age of the film, it looks good. Black levels are quite nice. There’s a ton of texture here that retains much of the film’s original grain and look.

The Dolby Digital TrueHD 5.1 is not going to spin that many heads. It’s not really intended to. The mix doesn’t really play much with the original mono presentation, and that is the way it should be. Dialog is right there, and the musical score blares through when appropriate. You don’t want an aggressive remix here. You want a clean, impressive release, and that’s what you get.

Only the DVD extras are ported over here and remain in standard definition with the exception of the trailer, which is kind of in HD.

Paramount and Batjac have done good justice to some of the forgotten Wayne films, and McLintock! is no exception. It’s very enjoyable and nice to see Wayne poke fun at himself. With a more than capable supporting cast that gets their moments to shine, for those who may not be too familiar with the Duke, this may be the film that helps to kick things off for you. Its price makes it a pretty good pickup for fans too.

Only Lovers Left Alive Secrets of the Third Reich