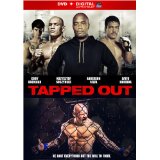 I have to admit when I first went into this film I went in with some rather low expectations.  I turned out to be more than a little surprised by this little underdog story that has a lot of heart as well as plenty of knuckle-crunching fights.  Sure, this follows in the footsteps of Rocky and The Karate Kid, as we follow a young fighter who overcomes great odds to achieve victory, and we’ve seen it before.  What helps this film stand alone is that it’s also a tale about revenge set in the world of small-time cage fighting.

Ever since witnessing the murder of his parents in a carjacking gone wrong, Michael Shaw (Cody Hackman) has been a bit of a reckless youth.  Constantly in and out of trouble with the law and poor grades in school, Michael is given one last chance as he is forced into doing community service at a local dojo.  The dojo is run by Reggie (Michael Biehn), a Karate instructor who at one time knew Michael’s father.  Stuck with janitor duties, Michael watches from the sidelines as Reggie trains his students, and this sparks Michael’s interest in taking up martial arts again.

It’s after meeting Reggie’s niece, Jen (Jess Brown) that Michael’s life begins to take a dramatic turn after she takes him to a cage fight.  It’s during one of the fights that Michael sees the man responsible for murdering his parents.  The fighter, Dominic (Krzysztof Soszynski), turns out to be a beast in the cage with an undefeated record.

Michael sees no other option but to face this man in the ring and begins his intensive training for his one shot at getting a justice for his parents.  But a fight just can’t be easily granted for Michael, and he has to prove himself to get into a tournament that will lead to an eventual bout with Dominic as well as the chance to make 50 grand.

Considering I know little to nothing about UFC fighting, I couldn’t tell you how accurate any of the fights are, but they are at least entertaining to watch here.  With the story co-written by Hackman, it would seem as though he catered this film to all his strengths and allowed him to show that he has a plenty of range whether in the cage or during the more subtle dramatic moments of the film.  The performance by Hackman is what sells this film. I wouldn’t dare put it in the same caliber of performance as Stallone with Rocky, but it’s still a good performance that is delivered here.

What I dug most, though, was getting to see Michael Biehn in front of the camera.  Seeing him show his range here was more than just a treat; this is a guy I’ve enjoyed watching since The Terminator and The Abyss.  Why he isn’t in bigger films these days is simply something I can’t understand.

As for the direction of the film, Allan Ungar comes out strong with his first feature.  Sure, the film shows that it was filmed on a lower budget, but it never gets in the way of the story or the performances.  This is a bit of an ambitious film for a first-time director, between the numerous fight scenes through the film as well as there being a fair amount of drama throughout.  This easily could have been a film that just fell flat, but it has a style that recalls the traditional underdog films of the past yet remains fresh and doesn’t ever feel like a simple retread.

With the R rating, unfortunately this will limit the audience that this film would appeal to.  Really this is nothing more than a more profane Karate Kid with more aggressive fights.  But with Netflix and Red Box and numerous other outlets for people to watch films now, hopefully this is a film that will find an audience.

Brent Lorentson is a horror writer and film critic based out of Tampa, Florida. With a BA in Digital Film, he co-wrote and co-directed Scavenger Hunt. His short stories have appeared in various horror anthologies. In 2019 his short script Fertile Blood will be a part of the anthology horror film Slumber Party. He is currently working on his first novel A Dark and Secret Place set to be released in late 2019. Favorite Films: Taxi Driver, Fight Club, I Saw the Devil, The Wild Bunch, Dawn of the Dead, A Clockwork Orange, Pulp Fiction, Heathers, The Monster Squad, and High Fidelity.
The Color of Lies (Blu-ray) Star Trek: Enterprise – Complete Fourth Season (Blu-ray)