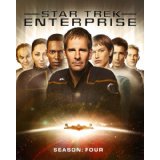 But it’s finally arrived. We now have all four seasons of Star Trek: Enterprise on high-definition Blu-ray collections. On the surface, this was the easiest show to release on Blu-ray. It’s the only Trek series already in widescreen format, and it’s the only one to have been filmed, at least partially, in high definition to begin with. There was a risk, however. The series has gotten some of the most mixed reviews of any of the shows in the franchise. The truth is, it’s been getting kinder buzz in the years since it left the air. In fact, most people, myself included, feel that Enterprise was at its very best when it was taken off the air. But cancelled it was, and for the first time in almost 18 years there was not going to be a Star Trek television series on the air. What started with Star Trek: The Next Generation finally came to an end with the final episode of Enterprise.

Strangely enough, the season begins and ends with three of its worst episodes ever. But in between was pure Star Trek gold. Brannon Braga, the guy who brags that he was never much of a Star Trek fan, was getting burned out. The timing was right, because as fans we were getting burned out with Braga. Manny Coto moved up to the top spot in the writer’s room, and although we still had Rick Berman in his Furher seat, Manny was not only a fan of Star Trek, he loved the ideals and the promise of the franchise. In his hands Enterprise finally embraced its origins and flew to its highest heights.

First those worse moments. When the Xindi story ended in season three, it ended with a cliffhanger that found Archer back in time to the days of World War II. This time there were alien Nazis. This wasn’t the history we all learned in school. The writers had painted themselves into a corner and ended up beginning the season trying to fight their way out of it. And while images of the Enterprise in a dogfight with World War II era planes might sound exciting, the episode was a loser and also closed the door for good on that whole stupid Temporal Cold War thing.

Then there is the season finale, which was a complete and utter slap in the face to the actors on the show and the fans who had supported it up to the bitter end… and beyond. Berman and Braga decided they had the right to finish the show and took it out of Coto’s hands. The result is actually an episode of Next Generation that has Jonathan Frakes returning as Riker using a holodeck simulation of Enterprise‘s adventures to help him make a decision we saw resolved in an episode of that show’s final season. Many of the actors let their feelings be known publicly, and they were right to do so. Some of them have calmed in the years since, but this was Berman and Braga’s final middle-finger salute to the very people who had allowed they and their families to live quite comfortably for so many years.

This is not the time to dwell on the bad when there is so much good to be found here. Coto decided to bring together threads from various episodes of both the original series and Next Generation. The result was a series of 2-3 episode arcs that allowed them to actually give us better production values on a smaller budget. By amortizing the costs of things over more than one episode, we were able to get sets and circumstances that weren’t even possible before. Here are some of the highlights:

We get two huge pieces of Star Trek lore in one. Brent Spiner guest stars as Arik Soong, an obvious ancestor of Data’s inventor and builder. This Soong is not involved in cybernetics. He’s in prison because he had rescued embryos from the Eugenics War that produced Khan. These augments take a Klingon ship, and Soong is released into Archer’s hands to try to stop the young augments from destroying anything else. The episode brings us in touch with the famous green-skinned Orions. The slave-girl elements will be explored in another season four episode. Spiner obviously enjoys himself a great deal here, and the result is quite entertaining.

This episode bridges the concept of the Spock era Vulcans with the not-so-good guys that started out on Enterprise. I was always a bit disappointed that Vulcans never got the kind of rich cultural attention in these later shows that the Klingons, Romulans, Cardassians and Ferengi received. Spock was the original alien of the franchise. That mistake gets somewhat corrected here. We meet a young T’Pau and witness a shift in the Vulcan power structure. It’s a kind of Vulcan reformation that involves Trip and T’Pol. I regret that a lot of their romance is involved in the episode, and Joanna Cassidy makes a terrible Vulcan as T’Pol’s mom.

Phlox is kidnapped and forced to help the Klingons deal with a deadly plague that is threatening to wipe them out. It’s the result of Klingons attempting to use Eugenics Wars technology, and it explains the stark differences in appearance between Kirk-era Klingons and those depicted since the first feature film. It doesn’t explain, of course, how same character Klingons appeared in a DS9 episode as the new Klingons.

This is my favorite Enterprise episodes of the entire show. Even the opening credits and music are changed to reflect the Mirror Universe’s history. They refilmed that final scene from First Contact with Jim Cromwell, and the result is quite satisfying. This is the only Mirror episode to take place entirely within that universe. The Mirror Archer and crew come upon the Defiant that Kirk’s crew allowed to slip away during The Tholian Web. It went back in time and Archer sees its advanced weaponry to be his shot at saving and ultimately conquering an empire. I can even forgive a terrible CG version of a Gorn, one on my favorite Trek aliens.

Each episode is presented in its original aspect ratio of 1.78:1. The 1080p image is arrived at with an AVC MPEG-4 codec. This was the first Star Trek series to be filmed in both HD and widescreen. Most areas broadcast the series in that way, so this will look very much like you remembered it, only better. The computer-generated ships and planets are the most impressive here. You really get a sense of what the original show could have looked like if it had been done today. Solid black levels really sell the deep inky blackness of space, while superior contrast really brings out star fields and other objects in space. There’s a texture to this show very different from the glossy world of previous shows that makes it all stand out. This was the way the show should have looked for all of you who didn’t have HD broadcasts ten years ago.

All of the features from the DVD sets are included in this five-disc collection. There are also select deleted scenes and commentary tracks.

Before Her Time – Decommissioning Enterprise: This is a four-part last look at the show. You can’t play them all as one.

Part 2 – Memorable Voyages: (29:40) Here the cast gets to talk about the final season. The section also looks at the highlight stories.

Part 3 – Final Approach: (30:03) Cast and crew talk about seeing the writing on the wall. They have their own thoughts on why it ended and moving on. Their thoughts on the finale have softened here a bit.

Part 4 – End Of An Era: (29:12) Here the focus is on the end of the Berman era of Star Trek. Braga is actually pitching getting a show to do again. He wonders what they could do. I say keep Coto, dump the rest.

In Conversation – Writing Star Trek: The writers (minus Coto) reflect on the show. At first Braga is not there and is represented by a screen. The jokes are at his expense. When he shows up, it’s Coto who is the butt of the jokes.

The show ended. Opinions varied and blame was passed around. The sad fact remains that Enterprise ended when it was at its best. Then it ended with a whimper that was disrespectful to everyone. Berman and Braga are gone from the Trek universe. This set stands as a testament to what Trek could have been in someone else’s loving hands. Now, “These are the voyages…”

Gino Sassani is a member of the Southeastern Film Critic's Association (SEFCA). He is a film and television critic based in Tampa, Florida. He's also the Senior Editor here at Upcomingdiscs. Gino started reviewing films in the early 1990's as a segment of his local television show Focus. He's an award-winning recording artist for Omega Records. Gino is currently working on his 8th album Merchants & Mercenaries. Gino took over Upcomingdiscs Dec 1, 2008. He works out of a home theater he calls The Reel World. Favorite films: The Godfather, The Godfather Part II, The Body Snatcher (Val Lewton film with Karloff and Lugosi, not the pod people film), Unforgiven, Gladiator, The Lion King, Jaws, Son Of Frankenstein, The Good, The Bad And The Ugly, and Monsters, Inc.
Tapped Out Maleficent