A Million Ways To Die In the West 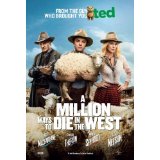 With the exception of Blazing Saddles and City Slickers, it’s not easy to come up with a successful western/comedy.  But leave to Seth MacFarlane to venture into this territory with his irreverent humor in tow as he looks to beat the odds and make a successful western with his new film A Million Ways to Die in the West.  Following the success of Ted, I was looking forward to seeing what MacFarlane would do next; after all, I feel he’s the comedian who speaks to my generation better than anyone else out there.  As one of the comedy greats of the time, I had little doubt about his ability to write and direct another hit, but where my concern mainly fell is on how he would fare as the leading man.

When we first meet Albert (MacFarlane), he’s running late for a duel with a gunslinger to whom he is in debt.  He’s no match for the gunslinger, and he does his best to beg and wisecrack his way out of the duel to the town’s disappointment.  With a minor reprieve and an even more minor gunshot wound, Albert is sent on his way.  Unfortunately Albert’s good fortune doesn’t last long once Louise (Amanda Seyfried) dumps him so she can “work on herself”.

Albert drags his broken heart to his two best friends Edward (Giovanni Ribisi) and Ruth (Sarah Silverman).  Though Albert feels depressed about his love life and being and unsuccessful sheep farmer, Edward reminds him that he could always be in love with a woman who is a prostitute, not to mention the breadwinner of the family.  Unfortunately for Albert things only get worse when he discovers that Louise is not being courted by Foy (Neil Patrick Harris) who runs the town’s mustache boutique.

Once Anna (Charlize Theron) arrives to the town Albert’s life seems to be on the verge on taking a drastic turn.  Anna is the wife of legendary bandit Clinch (Liam Neeson) who is off with his boys searching for gold, as for Anna she’s enjoying being away from the abusive husband.  After she and Albert cross paths during a bar fight the two begin to develop a bond as she wants to help Albert win back his “true love.”

In a fit of jealous rage Albert ends up challenging Foy to a duel.  Albert is out skilled by Foy, and he only has a week to improve so he can survive this gun battle; thankfully he has Anna to show him the ropes.

The film is filled with one-liners and laughs, but what makes the film so charming is MacFarlane’s ability to squeeze in enough heart with his characters to get you to care about them.  Sure, we know right off the bat how terrible Louise is for Albert and that of course Anna is a better match, but MacFarlane wisely takes his time with having his characters discover this.  Though the film does have a lot of heart to support it; I had a hard time connecting with it as I did with Ted, not that it makes the film a lesser movie, but I just don’t see how this will age over the years.

As for my concern for MacFarlane in the role of the leading man, he has his moments where he shines showing his comedic chops, but it was a little harder taking him seriously during the more dramatic moments.  But with this kind of film, we’re not looking for Oscar caliber performances but simply moments that make us laugh, and that is what MacFarlane delivers in spades.

Which leads me to the humor…this film is really not for kids.  I know people think Family Guy has it raw moments, but A Million Ways to Die in the West just may be the most offensive comedy to come out in years.  It’s not just dick and fart jokes (though they are here and plentiful); instead think of every raunchy joke you can imagine and throw in some racial jokes and that will cover maybe the first thirty minutes or so.  One of the funniest bits for me involves a music bit about mustaches; oddly enough that may be one of the only kid-friendly moments in the film.

In the end MacFarlane has another hit on his hands, but unfortunately it just doesn’t stick to me like Ted did.  What I can appreciate is that MacFarlane took a big risk at attempting a western, a genre that seems to frighten all the big studios and he delivers a film that is true to his style.  His visuals do a great job at recalling the old John Wayne and John Ford classics, as does the score by Joel McNeely. It’s not Blazing Saddles, but MacFarlane is on the right track to becoming the next Mel Brooks.

Brent Lorentson is a horror writer and film critic based out of Tampa, Florida. With a BA in Digital Film, he co-wrote and co-directed Scavenger Hunt. His short stories have appeared in various horror anthologies. In 2019 his short script Fertile Blood will be a part of the anthology horror film Slumber Party. He is currently working on his first novel A Dark and Secret Place set to be released in late 2019. Favorite Films: Taxi Driver, Fight Club, I Saw the Devil, The Wild Bunch, Dawn of the Dead, A Clockwork Orange, Pulp Fiction, Heathers, The Monster Squad, and High Fidelity.
Maleficent JLA Adventures: Trapped in Time