Posted in: No Huddle by Brent Lorentson on June 2nd, 2014 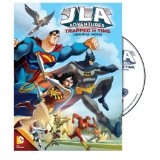 With the clock ticking till the release of Batman vs. Superman, Warner Bros needs to do all it can to get the fans on board for the arrival of the the Justice League.  When it comes to the handling of the DC universe, though fans may be divided on the films, it seems just about everyone will agree the animation is about as good as it gets when it comes to comic adaptations.  In the case of the Justice League perhaps the only way to get it right is through animation, considering there seems to always be something massive going on that it would seem nearly impossible to translate in a live-action setting.

The Legion of Doom, headed by Lex Luthor, has managed to reach the Arctic Circle, where Lex sets in motion one of his most fiendish plans, to absorb water from around the globe, increasing the shorelines to which he has previously purchased the land.  The Justice League arrives just in time, and in the process of their fight, Lex is trapped in a block of ice where he is thought to have perished.

Jumping ahead a 1000 years, two young wannabe superheroes, Karate Kid and Dawnstar, tour a museum where they come across the block of ice that still contains the infamous Lex Luthor.  A reckless moment causes the ice to break, and Luthor emerges from the ice.  While investigating the museum, Luthor discovers the Eternity Glass that belongs to the Time Trapper.  It’s with the Eternity Glass that Luthor travels back to his own time with a new plan to finally defeat the Justice League.

When it comes to the plan Luthor has to defeat his enemies, it’s a heck of a plan, and if it works, it would surely shake up the world as we would know it for our superheroes.  Though the Justice League team is in the film, the main characters are Karate Kid and Dawnstar; they’re kids ,but they show they can hold their own standing shoulder to shoulder with Superman, Batman and friends.

The biggest thing that got to me is that I’m just not a fan of the look of Batman and Robin here.  I’m much more partial to the look from Batman: The Animated Series.  That being said, I do like the look of Lex Luthor and the voice work done by Fred Tatasciore.

With a decent script and plenty of fun action bits throughout, this is a fun and original entry into the DC universe.  Unfortunately Trapped in Time only clocks in at 53 minutes, but thankfully it manages to pack in plenty of story and keeps it fun for all ages.

Brent Lorentson is a horror writer and film critic based out of Tampa, Florida. With a BA in Digital Film, he co-wrote and co-directed Scavenger Hunt. His short stories have appeared in various horror anthologies. In 2019 his short script Fertile Blood will be a part of the anthology horror film Slumber Party. He is currently working on his first novel A Dark and Secret Place set to be released in late 2019. Favorite Films: Taxi Driver, Fight Club, I Saw the Devil, The Wild Bunch, Dawn of the Dead, A Clockwork Orange, Pulp Fiction, Heathers, The Monster Squad, and High Fidelity.
A Million Ways To Die In the West Beyond the Trophy