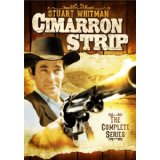 When something is successful, it doesn’t take long for everyone else to try to find out just what those secret spices are and attempt to cash in on the wave. In 1963 NBC started one of those waves with The Virginian. While it wasn’t exactly the start of the western television tsunami, it was one of the longer-lasting ratings winners after the big two (Gunsmoke and Bonanza). By 1968 CBS was looking for a way to copy that success. One of The Virginian’s unique qualities was its 90-minute running time. Many westerns ran just 30 minutes with plenty of hour-long shows. CBS decided that perhaps it was the more-is-better model that worked so well for The Virginian and came out with their own 90-minute western. That was The Cimarron Strip. It was good, but it was no Virginian, and the timing couldn’t have been worse. Westerns were making way for the cop and detective shows, and The Cimarron Strip lasted but a season.

Marshal Jim Crown (Whitman) was a lawman in the untamed territory between the Kansas Territory and the wild Indian lands. It was a narrow strip of land that had been widely neglected by the law until Crown’s arrival. He arrived to find the jailhouse had been taken over by Scotsman MacGreger (Herbert) who was using it for his still which had just blown to pieces, taking the jailhouse with it. MacGreger was part owner in the local pub/hotel/restaurant. Also newly arrived in town was Dulcey Coopersmith, who was from England by way of Rhode Island. She was searching for the father she never met. Unfortunately, she was too late. He was once also the co-owner of The Wayfarer Inn with MacGreger, but he had died. Dulcey quickly settled in as co-owner, and Marshall Crown ended up setting up shop there as well because of the blown-up jail.

The 90-minute format isn’t all the show took from The Virginian. The cast also included Francis Wilde, a young photographer and hopeful journalist who also lived in the inn. He was played by Randy Boone, who had spent three years on The Virginian as Randy Benton. Both Francis and MacGreger ended up serving as deputies to Crown while Dulcey took care of them. They were a kind of family in many ways.

The Cimarron Strip was really a conglomerate of many of the westerns of the day. In addition to cast and running time, The Cimarron Strip borrowed the character-driven stories of The Virginian that often gave the spotlight to the guest stars who played all sorts of charming or evil characters. Of course, the idea of a marshal heralds back to Dillon in Gunsmoke.

The show was unique in how it often portrayed the episode’s “bad” guys. While there were more than a few of the kinds of cutthroat outlaws that frequently populated the western scenery, here we found more complicated people more times than not. Many of the villains were misunderstood or thrust into dire circumstances. Crown was by necessity the kind of lawman that knew the difference and could be hard as nails on one outlaw while almost nurturing to another. It was this deep understanding of human nature that Stuart Whitman brought out in his performance. And it is the performances of the cast that really set the show apart from the many other one-season entries in the western game.

There was a formula to the episodes even if the characters and their motives changed. You have the standard shows where someone has a grudge against Crown and sets out for revenge. The jail at the inn had to be the most insecure jail in all of the Wild West. Someone broke out nearly every episode. Often it was the kindly Dulcey or the naive Francis who gave them their chance to escape. Almost every episode ended with a gunfight and the participants crouched behind giant boulders.

There was a notable exception to the usual fare. A Knife In The Darkness brings none other than Jack The Ripper to the Cimarron. At least that’s the way it looks. We’ll never know for sure. The episode was written by renowned malcontent Harlan Ellison and was shot quite differently from the rest of the episodes. It all takes place on a foggy night with plenty of mystery and atmosphere. One of the women killed provides a somewhat graphic and lingering death for a woman in those days of television standards. I suspect it’s the stand-out episode for fans of the series and appears nearly at the end of the show’s run.

The show’s production values were a bit higher than average for the day but not quite up to the standards of The Virginian. The locations are the typical places we see in most of these shows. There was probably less variety to the locations than I’ve seen in other westerns of the era. Stuart Whitman’s own production company made the show, so he had a third interest in any profits. That was a pretty smart and clever deal that reminds me more of modern shows than anything from 1968.

You get all 23 episodes on 8 discs. There’s a short interview with Stuart Whitman on the last disc. It’s always fun to go back and watch a show like this because one thing is sure and for certain, “They’re a dyin’ breed“.

Gino Sassani is a member of the Southeastern Film Critic's Association (SEFCA). He is a film and television critic based in Tampa, Florida. He's also the Senior Editor here at Upcomingdiscs. Gino started reviewing films in the early 1990's as a segment of his local television show Focus. He's an award-winning recording artist for Omega Records. Gino is currently working on his 8th album Merchants & Mercenaries. Gino took over Upcomingdiscs Dec 1, 2008. He works out of a home theater he calls The Reel World. Favorite films: The Godfather, The Godfather Part II, The Body Snatcher (Val Lewton film with Karloff and Lugosi, not the pod people film), Unforgiven, Gladiator, The Lion King, Jaws, Son Of Frankenstein, The Good, The Bad And The Ugly, and Monsters, Inc.
Super Duper Alice Cooper The Fault in Our Stars