Posted in: No Huddle by Archive Authors on June 5th, 2014 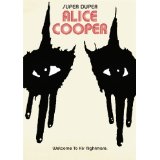 “Welcome To My Nightmare”

As someone raised by parents who grew up in the 70’s, I am no stranger to Alice Cooper.  I can recall countless hours listening to mix tapes with hits such as “No More Mr. Nice Guy”, and “I’m Eighteen” on them. With that being said, I wouldn’t say I’m a diehard fan of his. I know of him, I know of his music, but what I didn’t know I quickly learned by watching Super Duper Alice Cooper.

Super Duper Alice Cooper follows preacher’s son Vincent Furnier from his childhood in Detroit, to his high school years in Phoenix. Influence by Beatlemania, he and friend Dennis Dunaway start up the band The Earwigs as a way to play at their school’s talent show. Their name quickly changes to The Spiders, and then an incident with a Ouija board changes their name to Alice Cooper. They start to hit it big, but Vincent soon takes up the name as his own, and that’s when the demons come out. He soon becomes bigger than the band, leading to the change from band to solo artist. Along with the rise to stardom comes his struggle with alcoholism and drugs. Besides the main story, there are many highlights of Cooper’s time with the band in L.A. with Frank Zappa, the time they played a festival with John Lennon, and Alice’s family life. It’s a long battle between Vincent and the monster he had created, a real-life tale of Jekyll and Hyde which makes for an amazing story  backed up by a plethora of interviews along with beautifully pieced together archival footage and animations.

A lot of the time, rock docs like to be more focused on the technical aspects of an artist more than the person in question. VH1’s Behind the Music series is a good example of how they tend to focus a little bit more on the music the artist puts out than the artist. This isn’t bad in most cases, but I am a sucker for pathos and love getting to know more about the person behind the music than how the music was made. Super Duper does a good job of mixing both of those things. It definitely felt more of a story being dictated than just a bunch of people talking about how an album was made or about the time they were top on the billboard charts, and to me that definitely isn’t a bad thing.

Every single interview details every aspect of Furnier’s life and how it was changed by his transformation into Alice Cooper. A majority of the interviews come from Cooper, friend and band bassist Dennis Dunaway, along with long time manager Shep Gordon. There are also the occasional interviews from fellow artists such as Dee Snider, Elton john, Iggy Pop, and John Lydon. Even Cooper’s wife and mother make an appearance. Each of the interviews does a great job of narrating and adding many points of view on the events happening in Cooper’s life.

A lot of the archival footage in the documentary is concert footage along with the occasional home movie and small television interview. The footage is mixed with animated photos and newspaper clippings, which isn’t anything special as I’ve seen most rock docs do this, but it’s still pretty cool to look at seeing as how most of the photos seem to be from Cooper’s or other band members’ personal photo albums. The only thing I disliked about the footage and the animation was the constant digitally-added film grain and Gaussian blur; other than that everything was well animated and well edited together.

There are a few TV interviews here and there throughout the documentary, but they are cut very short most of the time; luckily for those who want to watch these interviews in full, they can be found in the rare-footage section of the bonus material. Along with the extended interviews there are a few deleted scenes that seem to have been taken out mostly because they didn’t contribute much to the documentary itself, but for those looking to know more about Furnier’s life before Alice and his relationships with family and friends, they are worth taking a look at.

Casual fans of Alice Cooper will find this documentary extremely insightful on the life of Vincent Furnier, along with the creation and rise of the band and character of Alice Cooper. For diehard fans, I feel that Super Duper Alice Cooper will be just as entertaining as it is educational. I found it to be a fun and well put together documentary, and I’d say it is definitely well worth the watch.