Posted in: No Huddle by Brent Lorentson on June 9th, 2014 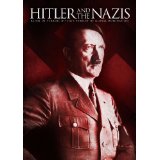 Despite the atrocities that Adolf Hitler was responsible for, this ruthless visionary had an uncanny way of getting people to not only listen to him, but to follow him, and die for his quest of world domination.  We all know the name Adolf Hitler; it’s a name that will forever hold the stigma that it will remind people of nothing but hate and genocide.  But what made this man slip into darkness, fueled by hate with the goal of eliminating the Jewish race?  Unfortunately the documentary doesn’t give any definite answers, but what it does do is show us the path that Hitler took as he went from soldier, to prisoner, to leading an army that was fueled by pride and hate with their eye on global domination.

The DVD is broken up into five parts, each coming in just under an hour in length. Each part focuses its attention, respectively, on a time period during Hitler’s rise and fall.  Part 1 consists of the time following the end of World War 1 as he was detained in prison and where he famously wrote Mein Kampf. During this time the amount of footage of Hitler seems to be fairly limited, and the documentary seems to only show stills of Hitler at this time.

It’s Part 2 that seems to be the start of where we get to see more of the restored footage; a good portion of this part focuses its attention on the Olympic Games that were held in Berlin, when Hitler and all of Germany were first exposed on a worldwide scale.  But it was the exposure and the defeat Germany faced by the Americans and Jesse Owens that sparked an “outrage” from Hitler.  The narration plays well as footage of an upset Hitler seems to look on from the stands, but who’s really to say where this stock footage came from?  Most of this footage has been played time and time again when war documentaries seem to cover the Berlin Olympics or Hitler and his rise.  Here we actually get to hear a response from members of Jesse Owens’ family as they recall his reaction to the games.  These brief moments where we get to hear input from witnesses or survivors is a welcome change considering most of this nearly 5-hour documentary consists of nothing more than stock footage with narration playing over.

Parts 3 and 4 are where the bulk of the actual war footage is placed.  With a decent mix between B&W and color footage, the film prints relatively look nice, though they do show their age with plenty of dust particles and scratches throughout.  For a documentary that wants to be about Hitler, the film seems to lose its way during these parts and simply becomes a very generalized summary of the World War II.  Sure some of the footage is engaging and has some harsh footage from Auschwitz, but mostly this is all information we’ve seen and heard before.

What is noticeably missing is that at no time is Hitler’s obsession with the occult ever mentioned.  Things like the Nazi party destroying art and burning books is briefly mentioned but never explored.  But what is here that I found intriguing is a group that was organized towards the end of the war, the Werewolves.  No, not of the lycanthrope variety, but a guerilla resistance group that consisted of kids who were 12 and younger.

It’s Part 5 where this documentary takes a bit of a twist: The Secret Life of Adolf Hitler. I’m not sure if this was made for this release or was a found newsreel, but it seems out of place on this DVD.  With a blend of footage shot at Hitler’s summer home as well as footage shot around Germany, we get to see a lot of interaction between Hitler and his love interest Ava Braun.

Though the collective running time is nearly five hours, I feel so much is missing here that could have been explored but was simply ignored.  But there are some bits here that did interest me plenty: an interview with Joseph Malta, an executioner during the Nuremberg trials. There is also a brief segment about Hitler’s propaganda film maker Leni Riedenstahl which is engaging but is still lacking in content.  In defense of the film, what interviews that are included here are with people who have been long dead, and the segments are cut from a previous production.

For World War II enthusiasts, I’m not so sure how much this will excite anyone.  For a student looking for a glut of information for a report on the Nazis or Hitler, this is a good start, but it will definitely leaving you wanting to read and explore deeper into the material that exists throughout the web.  Sure, there was plenty of information that kept me interested, but after nearly five hours I still feel a bit cheated.

Brent Lorentson is a horror writer and film critic based out of Tampa, Florida. With a BA in Digital Film, he co-wrote and co-directed Scavenger Hunt. His short stories have appeared in various horror anthologies. In 2019 his short script Fertile Blood will be a part of the anthology horror film Slumber Party. He is currently working on his first novel A Dark and Secret Place set to be released in late 2019. Favorite Films: Taxi Driver, Fight Club, I Saw the Devil, The Wild Bunch, Dawn of the Dead, A Clockwork Orange, Pulp Fiction, Heathers, The Monster Squad, and High Fidelity.
Edge of Tomorrow Kissing Jessica Stein (Blu-ray)