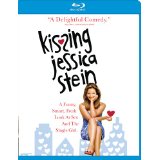 After dating an endless string of duds and dolts, Jessica Stein has finally found someone smart, funny, kind, compassionate and attractive enough to meet her impossibly high standards. Much to Jessica’s chagrin, however, it turns out her ideal match is a woman. Kissing Jessica Stein, the 2001 independent romantic comedy created by stars Jennifer Westfeldt and Heather Juergensen, is equal parts insightful and frustrating. You have a new chance to see for yourself now that the film has made its Blu-ray debut.

Jessica (Westfeldt) is 28 years old, which (in her mind) is basically 30. She’s a harried copy editor for the New York Tribune who hasn’t had a date in a year. Jessica is constantly reminded of her romantic futility by her mother Judy (Tovah Feldshuh) — who is always trying to fix her up with a nice Jewish boy — and her jerky boss/ex-boyfriend Josh (Scott Cohen).

We also meet Helen (Juergensen), an assistant director at an art gallery who is juggling three lovers. Bored with men, she decides to put a classified ad in the paper for a woman. In an effort to try something new, Jessica responds to the ad. The two begin a slow, tentative connection that involves friendship and ***SPOILER ALERT*** a fair bit of kissing.

The film is based on a 1997 off-Broadway play written by Westfeldt and Juergensen. The duo wrote, produced and star in the film adaptation, and it’s obvious a lot of care has gone into crafting the relationship between the lead characters. The movie may be called Kissing Jessica Stein, but the film devotes just as much time to developing Helen, who could’ve easily turned into a one-dimensional man(and woman)eater in the wrong hands.

It’s too bad the same amount of care didn’t go into other parts of the movie. For example, I wish the filmmakers had come up with a more inspired template for their rom-com heroine. Did Jessica really need to be the typical “great at her job/disastrous in her personal life” romantic comedy heroine with an apartment that’s *way* too nice for someone who works at a newspaper? (I have to keep reminding myself this movie came out in 2001, which is probably a little before these cliches became totally tiresome.) Some people might also be turned off by the fact that Jessica’s neurosis rivals that of any Woody Allen character. But I actually enjoyed how Jewish this movie was; Kissing Jessica Stein wore its culture on its sleeve a year before My Big Fat Greek Wedding (another modestly-budgeted romantic comedy written by a woman) did the same and became a blockbuster.

And given how careful Westfeldt and Juergensen were to avoid any stereotypes in depicting their lead characters’ unconventional relationship, I’m disappointed they didn’t seem to devote half the effort to the male characters. There’s a disastrous date montage early on that’s actually quite funny, but it stacks the odds too far in Jessica’s favor. In other words, we’re supposed to believe that Jessica is single because she’s too picky, but any sane woman would run screaming from the guys she has to choose from. Not surprisingly, one of the few exceptions is played by Mad Men star Jon Hamm, Westfeldt’s long-term, real-life partner. (Also, keep your eyes open for early-career appearances by Think Like a Man star Michael Ealy and the wickedly talented , the one and only Idina Menzel.)

Kissing Jessica Stein is rated R — mostly for language — yet feels as oddly tame and restrained as its title character. I’m not suggesting the raunch factor needs to be cranked up to 11, but much of the film and its comedic beats feel overly sitcom-y. (Including a discussion of “sexy-ugly” celebrities that includes Mick Jagger, James Woods, Anjelica Huston and others.) I did enjoy the bit where Helen’s friends shrewdly helped her build the perfect classified ad — eHarmony was still a few years away — including the Rainer Maria Rilke quote that ended up getting Jessica’s attention.

Still, the film’s shortcomings and limitations can mostly be overlooked because of the fascinating central relationship. Westfeldt is a lovely, luminescent presence who should’ve gotten more starring opportunities as a result of this film. Juergensen, meanwhile, is believably alluring and gives Helen more depth than we’re used to seeing from any “love interest” character, much less one who might be gay. The only other performer who really gets to shine is Feldshuh; Judy is always aggressively (and comically) trying to set Jessica up on dates, so it was a nice surprise that the film’s most touching moment was also one of its quietest.

It’s no spoiler to say that Jessica and Helen’s connection teaches both characters something about themselves. (Though I do wish it hadn’t taught Jessica to look backwards.) The movie may have its problems, but the central relationship contains more elements of love — companionship, caretaking, and respect, in addition to romance — than we’re used to seeing at the movies.

Kissing Jessica Stein is presented in an aspect ratio of 1.85:1. The 1080p image is arrived at with an AVC MPEG-4 codec at an average of 34 mbps. The overall image is softer and more muted than what we’d likely get if the movie had been made last year. However, I believe that has just as much (if not more) to do with the low-budget nature of the production. (The film was made for about $1 million.) So while the color may be less than vibrant — and the black levels could’ve certainly been deeper — this is a clean, pleasing presentation with warm skin tones and no defects to speak of. In all honesty, this movie was never meant to look dazzling. For better and worse, this faithful Fox Blu-ray makes Kissing Jessica Stein look exactly like what it is: a low-budget indie from 13 years ago.

The DTS-HD Master Audio 5.1 track consistently (and powerfully) brings the entire surround sound field to life whenever the jazzy/swingin’ soundtrack kicks in. (Not to mention a key appearance from a Barry White track.) It’s less consistent, however, when it comes to immersing the audience in its bustling New York City setting. Crowd and atmospheric noises come in and out from scene-to-scene, and the noises we do get are not very dynamic or nuanced. Of course, the most important thing for this comedy is that it the track serve the dialogue, which it does quite well.

All of the bonus material is ported over from the film’s previous DVD release and presented in standard definition.

Deleted Scenes with Optional Commentary: (24:50) The commentary comes courtesy of Westfeldt and Juergensen, and the scenes include extended versions of material that made the final cut, as well as outtakes and alternate endings for a couple of scenes. There’s some good, funny material here, even if it’s jumbled together in somewhat of an odd way. Features a Play All option.

Behind the Scenes Featurette: (8:50) Westfeldt and Juergensen (again) host this mini-doc exploring the production of the film, as well as its origins. What sets this one apart is that the stars excitedly visit some of the real-life locations from the film, as well as the ArcLight Theater in New York where their play was originally performed.

Audio Commentary with director Charles Herman-Wurmfeld and cinematographer Lawrence Sher: This commentary track is more focused on the production side of things and is an entertaining listen for anyone interested in the tips and tricks of micro-budget filmmaking. (Like how to make it seem like you have a crowded synagogue with only 20 extras.) Meanwhile…

Audio Commentary with stars/writers/producers Heather Juergensen and Jennifer Westfeldt:…if you only have time to listen to one commentary, I recommend you go with this one. The stars provide a wealth of background on the project, and discuss the differences between the play and the film. More importantly, Westfeldt and Juergensen have a fun, easy rapport and a seemingly encyclopedic knowledge of everyone who worked on this film.

The Blu-ray’s A/V presentation won’t blow you away, but it’s likely a decent upgrade over the DVD.

The movie is billed as a new spin on “Sex and the Single Girl,” Helen Gurley Brown’s 1962 advice book. And while certain parts of Kissing Jessica Stein feel thin and cliched, the relationship between its two main characters remains fresh 13 years later. (Heck, it’s actually more modern and foward-thinking than some of the rom-coms that come out today.)