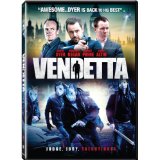 Revenge films are simply one of those guilty pleasures that seem to always be in the pipeline for being released, whether it’s on the big screen or straight to DVD. They are the kind of films that allow us to escape into the anti-hero’s frame of mind and go along on their journey of vigilantism.  Perhaps we may not have encountered the same circumstances of characters avenging slain family members (The Outlaw Josey Wales, Death Wish) or violent sexual assaults (Ms. 45 and Make Them Die Slowly) each film gives us the chance to remove ourselves from reality and politically correct convictions and root for these characters.  Vendetta follows in the long line of revenge films before, but does is hold up to the classics of the genre?

Danny Dyer (Doghouse & Severance) plays Jimmy Vickers, who is a special ops interrogator who returns home after hearing about the murder of his parents.  With no witnesses to the crime, Jimmy uses his acquired talents to discover those who are responsible for the murder.

In a flashback we get to see the events that lead to the death to his parents; basically Jimmy’s father is killed for interrupting a robbery, and in the process he kills the younger brother of a local drug dealer.  The thugs in this film are brutal and relentless, yet stay believable throughout the film, even in the films more outlandish moments.  As we see these drug dealers at work, ripping off customers and at one point forcing a woman to perform a sex act, it’s easy to hate these guys and get excited about their inevitable demise.

As for Jimmy, he’s a bit of a lost cause, in a failed marriage and now losing his parents; he’s at the end of his rope and simply needs to take out his anger on those responsible.  Where the film starts to drift away from the real world is when he’s able to get cops and other people to leak him information about those involved in the crimes.  It’s simply too easy for him to get this information despite how this would easily cost all those that have helped their jobs and possible jail time. But as the film progresses and tensions escalate as everyone seems to be hunting for Vickers, this becomes a film where I did start to wonder how this would all come to an end.

I’m doubtful about this ever getting a release in theaters in the US, but I’d imagine this would be a film UK audiences would enjoy. I’m more used to seeing Dyer in lighter roles, but he seemed to fit into this character nicely.  Really, I never expected to see a guy who I’m used to seeing in drunk party boy characters, now in the role of a hard boiled killer.

Though the film does have a low-budget quality to it, it continues to entertain thanks to a decent cast.  The overall look of the film reminded me of many straight-to-video action films of the 90’s. Some may view this as a bad thing, but I felt it was a look that seemed to fit the film nicely.  No, it’s not up there with Death Wish or even the underappreciated and under-seen Death Sentence, but this film is still a hell of a good time.

From the looks of it there seems to be a sequel already in the works for the film, which at least shows some confidence by investors that they have a potential franchise on their hands.  This is the kind of film that could work with numerous sequels much better than most of the straight-to-video fare that exists.  This is a fun little action film that will find an audience with time.

Brent Lorentson is a horror writer and film critic based out of Tampa, Florida. With a BA in Digital Film, he co-wrote and co-directed Scavenger Hunt. His short stories have appeared in various horror anthologies. In 2019 his short script Fertile Blood will be a part of the anthology horror film Slumber Party. He is currently working on his first novel A Dark and Secret Place set to be released in late 2019. Favorite Films: Taxi Driver, Fight Club, I Saw the Devil, The Wild Bunch, Dawn of the Dead, A Clockwork Orange, Pulp Fiction, Heathers, The Monster Squad, and High Fidelity.
Amen. (Blu-ray) Ray Donovan: Season 1 (Blu-ray)