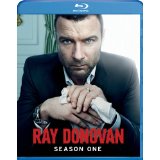 “It’s a different world out there.”

You can say that again. The television landscape is changing, at least on cable. Ray Donovan is the latest in the string of new shows that are attracting talent once thought out of reach for television. A show starring Liev Schreiber and Jon Voight, this Showtime series looked to be something very special… and it almost is.

Ray Donovan (Schreiber) is a Boston native who moved his entire family including his two brothers out to L.A. There he built an empire by being very good at what he does. What he does is fix problems, particularly for big-name celebrities and the lawyers who coddle represent them. His father has spent 20 years in jail for a crime he might not have actually committed. But Ray hates his father enough to have set him up and sent him to jail. Ray has a wife, Abby (Malcomson) whom he keeps at an arm’s length of his dubious business dealings. He also has a son and daughter who are somewhat conflicted in their feelings for their father.

Ray has two brothers. They run a boxing gym called Fite Club. Terry (Marsan) is pretty much a burned-out boxer himself. He works training other fighters. Bunchy (Mihok) has more serious issues. He has the mental capacity of a 12-year-old and can’t really take care of himself. He’s as challenged emotionally as he is mentally. Much of this is the result of his abuse at the hands of a parish priest when he was young. Ray tries to look after him, but Bunchy wants to be able to take care of himself, even when he can’t. It doesn’t help that he has a pretty bad drinking problem.

Ray’s old friend is Ezra (Gould). Ezra has lost his wife Ruth and finds himself in a constant state of fear and mental instability. There is a guilt eating away at him that we will uncover as the episodes progress.

Now Mickey Donovan (Voight) is out five years before anyone expected. He takes care of a family debt, or so he believes, and heads to L.A. to get his family back. Mickey is going to shake everything up. Ray wants nothing to do with him and forbids his family to see him. Of course they go behind his back, and bad things tend to be the result. He scares the hell out of Ezra, making his mental state worse. He’s a bad influence on Bunchy. What’s worse is that Mickey is aware of the damage he’s doing and he loves every minute of the ride. The character of a father unwanted by a child might hit a little close to home for Voight. His daughter Angelina Jolie has wanted little to nothing to do with him, mostly because of her own radical political leanings.

It’s Jon Voight’s performance as Mickey that is the catalyst for everything that happens here. The writers throw material at Voight, and he dances through each episode like a court jester putting on a one-man play. The character rushes headlong through the series leaving all manner of carnage in his wake. Voight portrays him as a clown crashing into this already complicated web of relationships. He’s a very bad man who loves to stir the pot and then watch it explode. The problem is that no one else in this show is very likable with the possible exception of Terry, who tries but fails to be a “good” guy and Bunch who just doesn’t know any better. Ray makes a big deal of doing things “for his family”, but he’s completely self-absorbed and obsessed with Mickey to the point of a narrow vision that puts him in these terrible schemes that always backfire.

The real disappointment here is the episode arcs themselves. In the first episode we get a glimpse of potential that is never realized again. We see Ray come up with clever solutions to some of these celebrity problems, and I was looking forward to a show based on that premise. It never appeared. By the second episode Ray is solving these problems through intimidation and brute force. No more cleverness. Certainly, he continues to be a strong character, and you can’t say anything bad about Schreiber’s performance. But the originality is sucked dry by the end of the first hour. Someone had a great idea. They put good actors in the roles and coasted from then on.

What we end up with is a lesser version of The Sopranos. Abby constantly reminds me of Carmella. She tries to ignore where all the money comes from but finds herself having inner turmoil about it all. She’s looking for some kind of spiritual answer. There’s a scene where she’s yelling at Ray from the driveway as he leaves without a word. Straight out of The Sopranos writers’ room. Ray is Tony. Ezra is Hesh. Mickey is Uncle Junior. Ray has a Russian bodyguard/advisor who could be Silvio. There’s a movie star who passes for Christopher, and the brothers combine for a reserved version of Paulie Walnuts.

While the story really spends its time watching the train wreck that is Mickey, there are a few subplots that bring in some impressive guest stars. Pooch Hall plays fighter Daryl, who is Mickey’s illegitimate black son. Frank Whaley plays an awkward rogue FBI agent who has his hooks into Mickey. James Woods has a few episodes as a psychotic killer Ray tries to use to kill Mickey. Starsky himself, Paul Michael Glaser, plays the current husband to Mickey’s old lover and Daryl’s mom.

The production values are top-of-the-heap. The show continues the Showtime tradition of film-like quality on these shows. But it’s not enough to elevate the series beyond a Sopranos wannabe. It’s worth a look, if only for the performances. In the end this doesn’t rise to the kind of quality I’ve come to expect in storytelling from these kinds of shows. There are only 12 episodes. Best to catch it in reruns from Showtime or Netflix.

Each episode is presented in its original aspect ratio of 1.78:1. The 1080p image is arrived at with an AVC MPEG-4 codec at an average 25 mbps. No question that this high-definition image presentation looks good. Colors are very natural, and black levels are solid. There is plenty of detail in this rather sharp image. Actor close-ups can look absolutely stunning. There’s a kind of glossy look at times, but most of the time this is a pretty realistic image.

The Dolby TrueHD Audio 5.1 is not often called upon to do much more than dialog. There are some nice musical pieces from time to time, and they do pop. Everything is clean and clear, but I wouldn’t expect any less.

Only Showtime Sync that works with portable devices.

I wish that the powers that be on Ray Donovan had stuck with the kind of show they set up in the pilot. I would have loved to see more of these wonderfully clever solutions to the pampered Hollywood troubles. Instead Ray becomes just another thug. The time is ripe for that kind of fixer show. With internet and camera phones in everyone’s hands, celebrities have more than the traditional paparazzi hounding their actions. Someone tell me when that fixer show starts to air. “I’ll be there, trust me, I’ll be there.”

Gino Sassani is a member of the Southeastern Film Critic's Association (SEFCA). He is a film and television critic based in Tampa, Florida. He's also the Senior Editor here at Upcomingdiscs. Gino started reviewing films in the early 1990's as a segment of his local television show Focus. He's an award-winning recording artist for Omega Records. Gino is currently working on his 8th album Merchants & Mercenaries. Gino took over Upcomingdiscs Dec 1, 2008. He works out of a home theater he calls The Reel World. Favorite films: The Godfather, The Godfather Part II, The Body Snatcher (Val Lewton film with Karloff and Lugosi, not the pod people film), Unforgiven, Gladiator, The Lion King, Jaws, Son Of Frankenstein, The Good, The Bad And The Ugly, and Monsters, Inc.
Vendetta 22 Jump Street