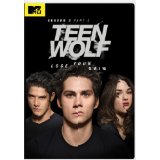 “There’s a Tibetan word for it. It’s called Bardo. It literally means in-between state, the state between life and death.”

If you’re a fan of the 1985 comedy staring Michael J. Fox, that statement is particularly appropriate. We all remember the cute high school romp where Michael J. Fox discovers that his family has been hiding a long dark secret: they are werewolves. Now the young teen finds himself having to deal with the usual growing pains of adolescence on top of dealing with the family curse. Before long he’s a basketball star and the most popular kid in school. A fun time was had by all. The film spawned a sequel with Jason Bateman and an animated series on television. It was all a hoot.

The cast is made up of some of the most solid young actors on television. There is real chemistry here between them all, particularly between Tyler Posey and Crystal Reed who play Scott and Allison respectively. I get the sense that the actors might be as into each other as their characters. If not, it’s quite an amazing performance. Tyler Hoechlin has the requisite brooding character as Derek. Holland Roden plays Lydia, and she’s evolved from the requisite stuck-up pretty girl in the group. Dylan O’Brien gets to be the goofy comic relief as Stiles. Together they play off each other quite nicely.

The second half of the third season brings with it an entirely new range of challenges. Most of the problems here are a direct result of the sacrifice ritual that was performed to stop the evil in the first episodes of this third season. We’re still dealing with the return of Peter Hale, played by Ian Bohen. He spends much of these episodes looking for answers from his dead sister. There’s a set of claws that both he and Derek will use to try and communicate with her spirit. It’s a bit creepy there. We know he’s got an agenda of his own, and it’s going to be played out in future episodes.

As the season begins, we’re getting something akin to the film Flatliners. The trio appears to have brought something with them from the other side. They are each having very disturbing dreams and visions. It’s hard for them to even tell what is real or not. They’ve left a door open on the other side, and they need to close it before they die and a new evil spirit is released on Beacon Hill.

That evil spirit appears to come in the form of magical Ninjas who wear odd masks and have lightning bugs for souls. They’ve got nasty swords that can leave a toxic remnant even if the wound is not otherwise fatal. These spirits are connected to a new family that comes to Beacon Hill.

Kira (Cho) is a new student. She’s a fox. No, I don’t mean she’s attractive. She’s literally a fox, and they don’t usually have a good history with wolves. She’s also a hard person to shock. Again, literally. She can’t seem to be electrocuted. Her parents appear to be part of some mystic tradition that is associated with the dark spirits.

The addition of Kira’s family gives the show a bit of a fresh look. There’s a lot of Japanese culture intertwining with the supernatural events here. We are exposed to Japanese mythology, and of course there’s going to be swords and martial arts fighting this time around. Kira’s character blends right in with the denizens of Beacon Hill, and I found the infusion of Oriental culture does a great job of getting the show out of the usual ruts.

There are some standout performances this season. Of course, Crystal Reed continues to be the best of the lot. She doesn’t get to kick as much butt this time, but I just love how much this character and actress have evolved over these first three years. The problem here is that she’s not with Scott this year. Now, I usually don’t pay a lot of attention to the romantic stories in these shows, but I must confess that the characters had a lot of chemistry that is missing this season. They attempt to create the same thing between Scott and Kira and Allison and Isaac, but none of that measures up.

Hats off to Holland Roden who really expands the character of Lydia. Honestly, I thought she was very annoying the first two seasons. I’ve warmed up to her considerably now. She also gets a couple of powers this season that allow her to be more of an active participant. She has a banshee scream and a little psychic power going for her. We’re still not quite sure what she is, but it’s not natural.

The true standout this season has to be the performance of Dylan O’Brien as Stiles. For the first couple of years he’s been the loyal friend and the comic relief. Not so this year. He won’t always be the loyal guy, and there’s very little that’s comic about Stiles this time around. O’Brien manages to show an incredible range that includes evil and determined. The actor manages to make this transition with impressive ease. You will completely appreciate his performance in this collection of episodes. He goes through some incredible changes and ends up playing dual parts. It’s hard to imagine how Stiles can ever be just for the laughs again.

The season is about having strange allies, and that whole enemy-of-my-enemy idea going on. The twins have returned and are pledging their loyalty to Scott. They recognize the need to be part of a pack and seek Scott out as their Alpha. They will get a real opportunity to redeem themselves this season. Argent and Derek end up strange allies. Argent’s focus is no longer on the family business of hunting werewolves. There are bigger evils in the world, and he’s finally accepted that fact.

There are a couple of absolutely standout episodes. Galvanize has a serial killer being treated at the Beacon Hill hospital for an injury. When he escapes, it’s bad news for Scott. You see, he kills kids who have glowing eyes. The final two episodes are a bloody finale to the season. At least one beloved regular is going to die. Almost everyone ends up with near-fatal wounds. The parents know the secrets now and are part of the story arc to a much higher degree. That also means they’ll find themselves more directly in the line of fire.

The show continues to reinvent itself. Each break has signaled a huge turn for the show’s direction. It will be very interesting to see where it goes from here. There have been some drastic changes that mean future episodes will have to be another new beginning. A good way to start preparing for that is to catch up on this action-packed collection of episodes.

You get the final 12 episodes on three discs. The only extra is a tribute to the show’s fans. Fox has begun releasing the series in half-season sets. I can’t say I’m a fan of the choice, but I almost understand the logic here. The series has expanded to more episodes, closer to a normal network run number. There is also now a several-month break between the season halves, much like USA network has treated such shows as Monk and Psych. One the one hand it’s annoying to have incomplete season sets on my shelf. On the other it saves fans from having to wait that much longer to get their hands on these episodes. Whatever your own take on this development, it is the reality nonetheless. “I guess this is the part where I say something witty.”

Gino Sassani is a member of the Southeastern Film Critic's Association (SEFCA). He is a film and television critic based in Tampa, Florida. He's also the Senior Editor here at Upcomingdiscs. Gino started reviewing films in the early 1990's as a segment of his local television show Focus. He's an award-winning recording artist for Omega Records. Gino is currently working on his 8th album Merchants & Mercenaries. Gino took over Upcomingdiscs Dec 1, 2008. He works out of a home theater he calls The Reel World. Favorite films: The Godfather, The Godfather Part II, The Body Snatcher (Val Lewton film with Karloff and Lugosi, not the pod people film), Unforgiven, Gladiator, The Lion King, Jaws, Son Of Frankenstein, The Good, The Bad And The Ugly, and Monsters, Inc.
Contest: Win In The Blood on Blu-ray From Anchor Bay 13 Sins (Blu-ray)